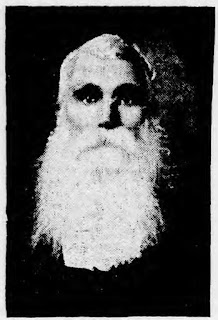 Minor Lankford Braden, a veteran of both the Mexican and Civil Wars, was the son of Robert Mansfield Braden, Sr. and Rhoda Lankford. He was born in North Carolina on May 16, 1822. His family moved to Georgia in 1827 where he spent most of his life, 48 of those years on his farm near Stone Mountain.

In 1840, he was employed by the principal keeper of the penitentiary where he gathered convicts on horseback and in stage coaches. Bored with his job, Minor enlisted in Company F of the Palmetto Regiment, South Carolina Volunteers at Mobile, Alabama on January 10, 1847. Company F, commanded by Colonel Butler, sailed from Mobile on January 15, 1847 bound for Vera Cruz, landing 18 days later on the island of Lobos, 60 miles off Vera Cruz. They joined General Winfield Scott on the land and water attack of Vera Cruz until the city surrendered. After the surrender of Vera Cruz, General Scott’s army moved to the city of Mexico where they fought in the battles of Contreras, Churubusco, Chapultepec and Garita de Belen. Minor was selected to be part of the storming party at Chapultepec. The company fought until they were able to plant ‘Old Glory’ on the ramparts. He was present when the American army took possession of Mexico. Minor stayed with his regiment from the time he enlisted until he mustered out of service in 1848, returning home ill from the tolls of war. He received a silver medal for honorable service in the Mexican war and drew a government pension ($20 per month in 1910) for his services until he died. 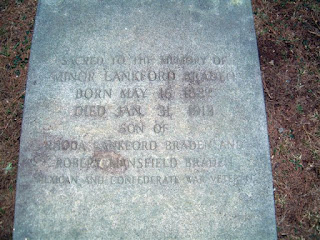 On April 9, 1862, he enlisted for the Civil War with Company C, Twelfth Georgia Battalion—Light Artillery in Stone Mountain, Georgia. First Lieutenant Braden served until July 18, 1862 when he left his command on wounded/sick furlough under the authority of General J.P. McConn in Chattanooga, Tennessee.

He died on January 31, 1913 at the home of F.M. Mansfield in Gwinnett County at the age of 92. He was buried in the Braden family cemetery in DeKalb County, four miles from Stone Mountain.
Posted by Denise at 12:26 PM