This past spring, I discovered a certificate my Granny, Daisy Lee Shields, received upon her graduation from the Mid-South Beauty College in Chattanooga, Tennessee. At the time, Granny was married to my Granddaddy, Samuel Jackson Holland, so her name was written as Daisy Lee Holland. The date on the certificate is June 19, 1941. 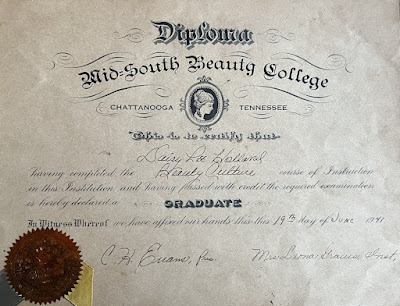 We have always known Granny was a beautician. I remember visiting one of her beauty shops as a child so that wasn’t news to me, but the certificate does help with telling her story. I previously blogged the little I know of Granny’s career so won’t go into all that detail here but if interested, you can read about here: Daisy Lee Shields, the beautician.

When researching Edward Finnus Steward, one of Granny’s many husband’s earlier this year, I discovered a couple of beauty shop ads in the Chattanooga Daily Times that were interesting to me. Because the story was about Edward, not Granny, I set them aside though. This certificate gave me a reason to take a second look at the ads.

In 1938, Granny and Granddaddy rented a home at 1101-A East 14th Street in Chattanooga. She was listed as Daisy Lee S. Holland and he Saml. J. Holland, a truck driver. My guess is the “S” stood for Shields. By the time the 1941 city directory was printed, they had moved to a rental at 1408 Fagan Street in Chattanooga. Granny was listed twice this time—one with Granddaddy, again listed as Saml. J. Holland, a truck driver working at Smith’s Trans. Corp. Granny was listed a second time by herself, as Mrs. Daisy S. Holland, a student living at 1408 Fagan Street. I remember finding this record some time ago and wondering why she was listed as a student. After all, she had a young daughter at a time when women most likely stayed home keeping house. Thanks to the certificate, now I know she was attending the Mid-South Beauty College, taking the Beauty Culture course!

Fast forward to November 25, 1941, and the Chattanooga Daily Times published an ad for a Daisy Holland advertising “Guaranteed Croquignole Waves, $2 to $7.50” for the Modern Midget Beauty Shop located at 1445 Central Avenue. Looking at Google Maps, both Fagan Street and East 14th Street are within walking distance of the Central Avenue address.

Another ad ran in the Chattanooga Daily Times on February 25, 1942, this one for an “Easter Special.” It listed Daisy as the manager of the Modern Midget Beauty Shoppe.

East Main Street was just blocks away from the other addresses mentioned earlier. Was this my Granny? She had multiple marriages—Holland, Steward (twice), Casbohm, Saylors, and Vest—but Mowery was never one I had heard of. Mama has told me Granny was out of her life for several years when she was a young girl. Was this a secret marriage Mama didn’t know about or is this a different woman. It’s hard to say without documentation to back anything up but certainly something to add to my list of things to watch for. I did find a record in the Chattanooga Daily Times of a Joe Mowery filing for divorce from Daisy H. Mowery in October 1945, but again, is this my Granny or another woman?

The ads ended during this timeframe, as did Granny’s marriage to Edward in April 1953. Except for the ad referring to Daisy Holland Mowery, I’m fairly certain most of the ads are referring to my Granny. What do you think?

Posted by Denise at 6:07 PM No comments:

New photo of my Daddy

Last week I shared two photos of my grandma, Floria Burnett Lankford, found while going through my sister’s photo collection. This week I thought it appropriate to share another photo I discovered in her collection—one of my Daddy (Sam Lankford) I have never seen before. He was just a young man at the time. The ballerinas on top of the cabinet are new to me as well so they’re no help in identifying a timeframe but I estimate the early 1950s. It’s too bad you can’t read the label on the 45. I don’t have many photos of my grandma, Floria Burnett Lankford, so was thrilled when I discovered two while visiting my sister recently. She looks just like I remember her in both photos. Grandma was born in Walton County, Georgia but lived for many years in Greene County, Georgia. I fondly remember the yearly family reunions held at the old home place in Penfield. 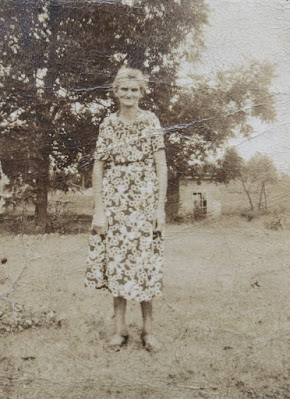 Posted by Denise at 5:25 PM No comments: 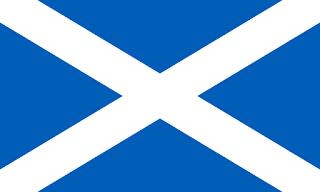 Elizabeth Durie, daughter of George Durie and Mary Elisabeth Taylor, was born 1834 in Inveresk, Midlothian, Scotland. Elizabeth had at least four siblings—James Durie (1824), Agnes Durie (1830), John Durie (1836), and Robert Durie (1839). Her parents had been married for 14 years at the time she was born. Elizabeth is my husband’s 3rd great-aunt with their nearest common relatives being her parents.

In 1851, the Durie family lived at 230 Holm Street in the Civil Parish of Barony, County Lanarkshire, Scotland. At age 17, Elizabeth worked as a milliner.

Elizabeth married John Morris, son of Joseph Morris and Ann Martin, at her parents’ home at 53 Cadogan Street in Blythswood, County Lanarkshire, Glasgow, Scotland on January 31, 1856 . Their marriage (after banns) was solemnized between them according to the banns of the Parish of the United Presbyterian Church. Elizabeth, a spinster, worked as a milliner, her father a storekeeper. John, a bachelor and photographic artist, lived at 49 Mains Street in Glasgow. His father was a shawl weaver and his mother deceased. The ceremony was witnessed by Arch. Robertson and her sister Agnes Durie.

On February 10, 1857 and less than 10 days after Elizabeth and John’s first wedding anniversary, her father died of apoplexy at his Cadogan Street home. George Durie was buried at Southern Necropolis Cemetery in Glasgow.

Elizabeth’s first child, a daughter they named Elizabeth, was born at 49 Mains Street in the District of Blythswood, County Lanarkshire, Glasgow, Scotland on March 28, 1857.

Their son Joseph was born on December 2, 1858 at 63 Surrey Street in the District of Hutchesontown, County Lanarkshire, Glasgow, Scotland. Sadly, Joseph did not survive infancy and died at home of whooping cough on May 24, 1859. He was buried at Southern Necropolis Cemetery in Glasgow.

The year ended on a happy note though with the birth of a second daughter. Ann was born on December 29, 1859 at their Surrey Street home in Hutchesontown.

Margaret was born in the Surrey Street home on January 4, 1861. The family lived in the same home that year when the census taker came around and found the new addition to the family just three months old. Elizabeth’s husband John was enumerated this year as a book binder and journeyman.

By the time their daughter Susan was born on August 9, 1864, the family had moved to 66 Carrick Street in Glasgow. On Susan’s birth certificate, Elizabeth was listed as Janet Morris in one column and Elizabeth Morris in another. John was again working as a photographic artist. The paper trail for John ends with Susan’s birth certificate, at least for me so I believe he died sometime after Susan was born and before the 1871 was taken.

In 1871, Elizabeth, daughters Elizabeth, Ann, and Susan, and a sister-in-law named Agnes Devine lived at 19 Maclean Street in the Govan Church district of County Lanarkshire, Scotland. Elizabeth worked as a seamstress. I assume the sister-in-law was actually Elizabeth’s sister Agnes Durie.

By 1881, Elizabeth had moved to a home located at 30 Breadalbane Street in the Kelvin District of Glasgow, County Lanarkshire in Scotland. She lived there the rest of her life. The home apparently belonged to her sister Agnes who was listed as the head of the household that year. Daughter Elizabeth (enumerated as Lizzie, age 22) and Susan (age 16) lived in the home. Elizabeth worked as a ladies cap maker.

Elizabeth died at home of a cerebral hemorrhage on May 2, 1897 at age 63. Her daughter Elizabeth was present when she died.

Posted by Denise at 8:56 AM No comments:

Postcards from the past

My sister and I were sitting at the dining room table last week, me on my computer as usual and she working on her stamp collection, when she pulled two postcards out of a box. While showing us the stamps on the postcards, she mentioned not knowing who the writer and recipient were. She also mentioned that our Mama had given them to her. Both postcards were addressed to Mrs. E. F. Steward and signed with initials only—E.F.S. I immediately knew they were written to my Granny, Daisy Lee Shields, by her husband, Edward Finnus Steward, whom was a recent subject of one of my blog posts.

Both postcards were addressed the same:

Edward was apparently traveling from north Georgia to California in search of work. To the best of my knowledge, Granny never lived in California so I suspect his search was unsuccessful. 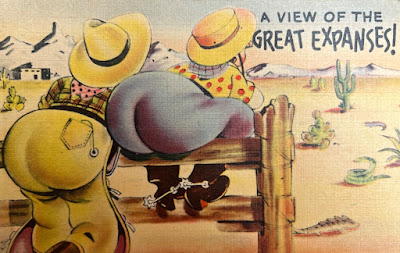 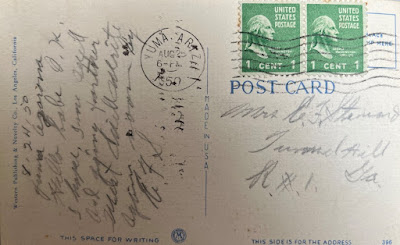 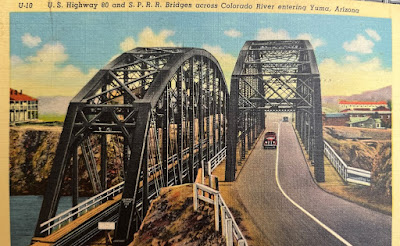 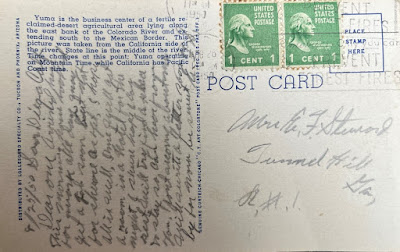 Dear one, arrived here this morning have looked for work all day. May get a job soon but not for shure as yet. I hope all is well. I will as well get a room in a hotel for the night. I shure hope I can rest. Will try find a place to stay so can hear from you. Don’t worry about me. I will write a letter soon. By for now. Be sweet. E.F.S.

Census records show Granny and Edward lived in Catoosa County, Georgia in April 1950 and Tunnel Hill is part of Catoosa County (and Whitfield County) which tracks with the paper trail.

It’s always fun to get these small glimpses into our ancestors’ lives.

Posted by Denise at 6:54 PM No comments: 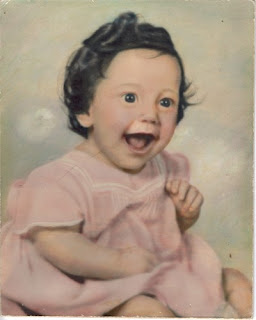 When Sandra was seven months old, she contracted laryngotracheobronchitis, an “inflammation and obstruction of the larynx, trachea, and major bronchi of children” according to The Free Dictionary. We know it as croup. She was taken from her home on Eastland Road in southeast Atlanta to Grady Hospital in downtown Atlanta. Sandra died there 24 hours later, on October 24, 1944. She was buried at Hillcrest Cemetery in East Point, Fulton County, Georgia the next day following a funeral service officiated by Rev. W. A. Duncan. 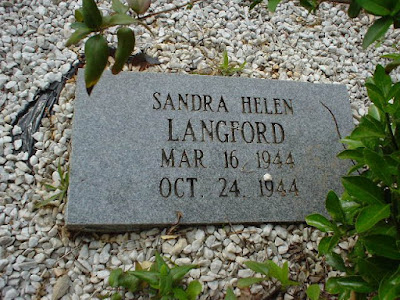 Posted by Denise at 3:34 PM No comments:

West Virginia Chapter of the IATSE

The photos I share here are part of Uncle Ralph Murphy’s slide collection given to my husband by his Aunt Jean in 2007. The collection consists of 15 boxes of slides (thousands) taken by Uncle Ralph, spanning the years 1947 to 1984. Many are scenic shots from their travels across the United States, some are family members, and others friends and co-workers. I converted the majority of the slides to digital several years ago and have been enjoying them ever since.

In this case, these photos show the start of a new chapter of the International Alliance of Theatrical Stage Employees and Moving Picture Machine Operators of the United States and Canada. This chapter was most likely formed in Clarksburg, West Virginia in the late 1940s or early 1950s. Uncle Ralph was a projectionist at Warner’s Skyline Drive-In Theater in Clarksburg and may have worked with some of these men there. 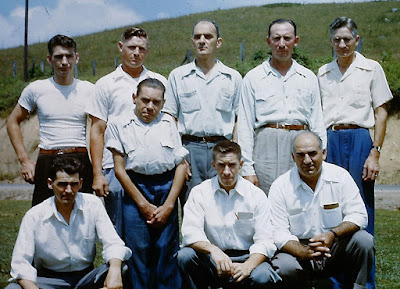 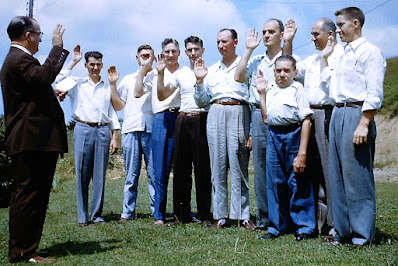 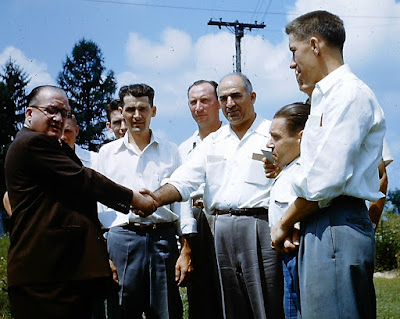 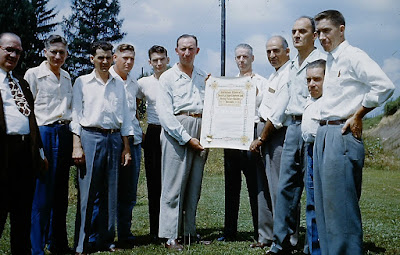 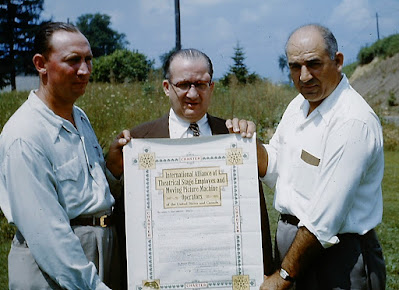 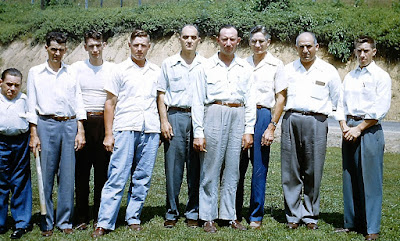 I don’t know who any of these men are but perhaps someone will stumble upon this blog post and recognize a family member.

A boy and his bicycle

The beauty of nature

Posted by Denise at 5:02 PM No comments: