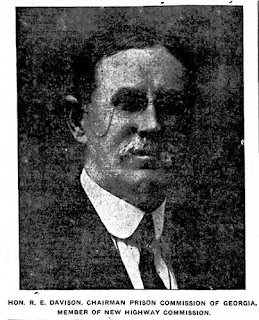 Banner-Herald, October 4, 1928
HONORABLE ROBERT E. DAVISON
In the death of Honorable R.E. Davison, chairman of the Prison Commission, Georgia has lost one of her most outstanding citizens and officials. Mr. Davison has been prominent in the affairs of this state of the past forty years or more. Commencing life on a farm in Greene county, in early manhood, he gained the confidence and esteem of the people and soon became recognized as one of the first citizens of the state. He was elected to the general assembly of Georgia from his home county for several terms, member of the prison commission, serving as its chairman for the past twenty years or more had been a ma [sic]. For a number of years he was a trustee of the Georgia State Teachers College and during his legislative career, he was a great advocate of the educational institutions in Georgia, giving his time, vote and influence towards securing appropriations. He was a man of unusual ability, noted for his fidelity to his friends. He was an affectionate father and husband. His departure will not only be a great loss to the family, but to his country and the entire state. The sincerest sympathies of his friends will be extended to the bereaved in the hour of their greatest sorrow.