Little Franklin’s time of Earth was short. After an illness of only two days, he died at 12:30 a.m. on October 10, 1925 in Honea Path, Anderson County, South Carolina. His death certificate records the cause of death as enterocolitis, “an inflammation of the digestive tract, involving enteritis of the small intestine and colitis of the colon” according to Wikipedia. He was buried at Bethany Baptist Church Cemetery in Belton, Anderson County, South Carolina. An unknown newspaper carried the following obituary:

On the night of October the 9th, while everything was calm and peaceful, God visited the home of Mr. and Mrs. T. W. Snipes and took from them their precious darling. He was two and one-half years old, and was sick only two days. Tis sad to part from you, Franklin, but ‘tis sweet relief to know you are in Heaven, where no tears are falling, and

How devastating this must have been for his family. 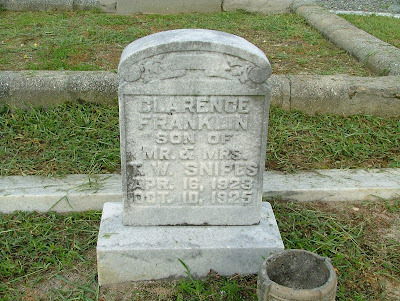