My connection to George is very distant—3rd cousin 3x removed of his wife.

On July 8, 1870, George and his family lived in Penfield, Greene County, Georgia. The census enumerator recorded George’s age as seven. His father was a farmer; his mother was keeping house.

On June 8, 1880, George and his parents lived in District 142 of Greene County. At age 18, George was still at school. His father was still farming; his mother was keeping house.

Beginning in the fall of 1891, George left his home in Greensboro to enter the University of Georgia in Athens to study law. He was a member of the Demosthenian Debating Society. In his response to a University of Georgia alumni survey for a “Centennial Alumni Catalogue” being prepared for the school centennial in June 1901, George wrote “I wore home knitted stockings and paid my board promptly when due.” George graduated in the spring of 1892 with a Bachelor of Laws degree. He was admitted to the Georgia bar that same year and started practicing law in Greensboro. A public servant, George served two years on the Greensboro city council, was mayor of Greensboro for one year, and secretary of the Democratic county committee for several years.

On October 6, 1892, George married Lila O. Boswell, daughter of William J. Boswell and Josephine Malone, in Greene County, Georgia. Lila was from Penfield so it’s possible that’s where the ceremony took place. Exactly a year later, on October 6, 1893, Lila gave birth to a daughter they named Lila Boswell Merritt, born in Greene County. George’s life was shattered when nine days later, his wife died on October 15. Lila was buried at Penfield Cemetery in Penfield, Greene County, Georgia. She was just 25 years old at the time of her death. 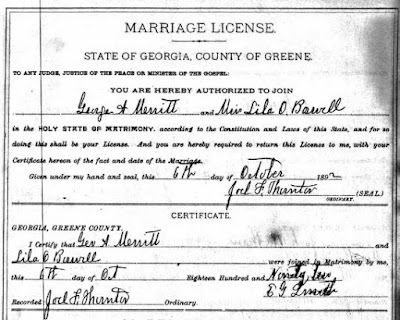 On June 13, 1900, a widowed George lived in Greensboro with his widowed mother and six-year-old daughter. He was enumerated as a lawyer.


MERRITT-DAVISON. One of the most beautiful weddings which ever occurred in Greensboro, Ga., was that of Miss Temperance Estelle Davison to Colonel George A. Merritt Tuesday afternoon at 4 o’clock at the Baptist church in that city. Before the ceremony Miss Marie Barnhart sang “Harts and Flowers,” after which the bridal party entered to the strains of Mendelssohn’s wedding march, played by Miss Nellie Hall. The ribbon-bearers, little Misses Norme Little and Sammie Gheesling, with long ribbons of tulle formed an aisle, down which the bridal party walked. First, Miss Kate Evans and Mr. Wade Durham, of Woodville; Miss Carrie Davison and Dr. E. G. Adams, Miss Addie Copelan and Colonel J. P. Brown, Miss Willie May Tappan and Mr. Luther Smith. Then the little flowers girls, Sara Hall and Marion Park, immediately preceded the bride with her matron of honor, Mrs. Mercer Reynolds, down the middle aisle, while the maid of honor, Miss Frances Adams, going down the right and the best man, Colonel James Davison, with the groom, down the left aisle. The ceremony was performed by Rev. A. F. O. Kelley. The bridesmaids wore pink and white dresses with pink sashes and white hats and carried arms full of pink and white sweet peas. The matron and maid of honor wore white dresses and hats and carried pink and white sweet peas. The bride’s beautiful wedding gown was of soft white point d’esprit over taffeta, made princesse, with a great deal of hand work on the corsage. Her going-away gown was of gray voll made with an eton coat, which she wore over a lingerie blouse. Mrs. Merritt is the youngest daughter of Mrs. Ella Davison and is greatly admired. Colonel Merritt is one of the best known lawyers in the county and has many friends throughout the state. The young couple left on the afternoon train for Tallulah Falls, where they will spend several weeks. Among the out-of-town guests present were: Mr. Wade Durham, Mrs. William Cartwright, Mrs. R. E. Davison, Mr. Jim Armstrong, Mrs. Floyd, Mr. J. H. Bowles, Mrs. C. C. Davison, Miss Annie Davison, Misses Young, of Woodville; Mrs. J. B. Davison, of Atlanta; Mr. and Mrs. Ed Lewis, Misses Annie Lou Tappan, Carrie Merritt, Mr. and Mrs. Charlie Merritt, of Siloam; Mr. and Mrs. Genie Merritt, of White Plains; Misses Newsome, Hart, Sibley, Mrs. Richards, Mrs. Elizabeth Thornton, of Union Point; Mrs. Charlie Sanders, Mrs. Lelch, Miss Colclough, Miss Calloway, of Penfield. 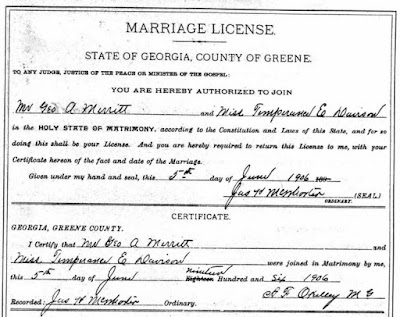 By all accounts, it was a beautiful wedding. The following year, 1907, George and Estelle welcomed a son they named George Alexander Merritt Jr.

George announced his candidacy for the legislature on March 4, 1910. The Athens Banner noted him on March 5 as “one of Greene’s most prominent lawyers …”


Mortuary—Mrs. G. A. Merritt, Greensboro. Greensboro, Ga., September 24.-(Special.) Mrs. George Merritt, wife of Colonel G. A. Merritt, prominent lawyer and member of the state legislature, died very suddenly at her home here this morning. Mrs. Merritt was one of the most popular young matrons of the city. She is survived by her husband, one young son, her mother, Mrs. Sarah Davison; one brother, Colonel James Davison, of Greensboro; and one sister, Mrs. Mercer Reynolds, of Chattanooga, Tenn. The funeral will take place from the Methodist church, of which she was a devoted member, tomorrow afternoon at 3 o’clock. Interment at City cemetery.

Although the news article doesn’t mention a daughter, I believe Estelle probably died in childbirth as her tombstone reads:


George was elected Ordinary of Greene County on January 23, 1913. The Atlanta Constitution reported on the election on January 24, 1913:


Col. Merritt Elected Ordinary of Greene, Greensboro, Ga., January 23.-(Special.)—The special election to fill the vacancy caused by the death of the late Judge James H. McWhorter occurred Tuesday. There was very little interest taken in the election, there being a light vote case over the county. Colonel George Merritt received the most votes and will be Greene's next ordinary. Mr. Merritt has twice represented this district in the legislature and is very popular here. His friends are congratulating him on his election to this office.

Sadly, three years later George took his own life on January 13, 1916. The Athens Banner reported his death on January 14:


Took Own Life—Ordinary of Greene County Died Yesterday Morning By His Own Hand (Special to the Banner.) Greensboro, Ga., Jan. 13.—George A. Merritt, ordinary of Greene county and prominent lawyer, killed himself at 7 o’clock this morning with a shotgun. The load entered near the heart. He served in the Georgia legislature terms of 1913–14. He leaves one daughter, Miss Lila Merritt, who is a teacher in the public school at Albany, Ga., and one son, George A. Merritt, Jr. Mr. Merritt appeared among friends as usual yesterday and no reason at this time can be assigned for his act.

The Atlanta Constitution reported his death on January 14 as well:


G. A. Merritt, Prominent Greene County Official, Ex-Legislator, Suicides, Greensboro, Ga., January—(Special.)—Hon. George A. Merritt, ordinary of Greene county, killed himself this morning at 7 o’clock at the home of his cousin, Mrs. Ava Young, with whom he resided. He used a shotgun, placing it against his heart. The load went entirely through his body. He was breathing his last when his cousin, who heard the report of a gun, went in to investigate. No cause is assigned for the rash deed except that he possibly brooded over his financial condition until his mind became unbalanced. Mr. Merritt was 54 years old, and was a man of sterling qualities, beloved by all who knew him. He was one of the most prominent attorneys in the legislature in 1913–14. His mother, who is 86 years old, is completely prostrated by the shock. A gloom is cast over the entire community. Besides his mother, Mr. Merritt is survived by a sister, Mrs. Tappan, of McRae, Ga.; a brother, Charles Merritt; a daughter, Miss Lila, who is a teacher in the public schools at Albany, Ga., and a son, George A. Merritt, Jr.

A casket and vault were purchased from McCommons-Thompson-Boswell Company for $35 each on January 14. George was buried at Greensboro City Cemetery in Greensboro. George’s tombstone was engraved with a birth year of 1861, however, he recorded his birth year as 1862 in the University of Georgia alumni survey for their “Centennial Alumni Catalogue” in 1901. Census records also indicate his birth year was 1862.


I’ve noticed in several news articles that George was listed as a Colonel yet when he submitted the University of Georgia alumni survey, he responded “none” to the line requesting dates of military service, name of commands, and office held.

George was a member of the Methodist Episcopal Church South.


* Photo of George A. Merritt is from Georgia: Comprising Sketches of Counties, Towns, Events, Institutions, and ... edited by Allen Daniel Candler, Clement Anselm Evans
Posted by Denise at 7:58 PM