My husband and I celebrated our 37th anniversary this week so I have weddings on my mind. In honor of our anniversary, I thought I’d share memories of my wedding as well as the traditional items my son and daughter-in-law thoughtfully included in their 2013 wedding that honored our family.

When my husband Charlie proposed to me, I didn’t say yes immediately. Instead, I told him that this was a big decision and I needed to think about it. I couldn’t remember how long I made him wait so asked him as I wrote this. He said it was a week. I hope the wait was worth it to him.

Our wedding was for Charlie, not me. I never wanted one. I always felt weddings were a waste of money that would be better spent on setting up a house to live in at the beginning of a new marriage. A wedding also meant I had to be the center of attention and that’s just not me. But he said he was only doing this once and he wanted to do it right. So, the planning began. This was long before the Internet and Pinterest were around so thankfully my roommate Helene was there to guide me. I wouldn’t have been able to pull it off without her. We funded the wedding ourselves. I want to say we only spent $1000. My wedding dress was my something borrowed so that saved a lot of money. No fancy wedding photo album—all I have are snapshots and they’re not that clear. We had a live band that played for free—it was my brother-in-law’s band. Most of the money was spent on food that we prepared ourselves … and booze.

We randomly selected the date, which turned out to be Charlie’s maternal grandparents wedding date as well. It was also Flag Day. This was appropriate considering Charlie wore his patriotic socks to the wedding (more about that later). The city I live in hangs flags on the telephone poles on our street every Flag Day so over the years I’ve had fun telling our boys they put them up to celebrate our anniversary. In fact, I still say that!

Three days before our wedding, I had to have an emergency root canal. The years of neglecting my teeth caught up with me at the wrong time. That was a lesson learned and I have taken very good care of them since then!

We had a simple ceremony in the neighborhood church my husband attended while growing up. The reception was held at the local fire department hall. Helene, my family, and I had spent Thursday and Friday that week preparing a wedding buffet for the approximately 150 people attending. Friends set the food up during the ceremony.

I had only lived in Virginia for a year so my part of the guest list was small—about 25—my family, my roommate, a friend and her family who I grew up with in Atlanta and who had convinced me to move to Virginia in the first place, and a handful of co-workers. The rest were Charlie’s family and friends.


Our niece Michelle was the flower girl. She gave me a “lucky” dime to carry as I walked down the aisle. As time drew near for the wedding to begin, Michelle started getting nervous. I believe we had to bribe her to walk down the aisle herself. She was still the best flower girl ever! Our neighbor’s son Brian was the ring bearer. I remember him telling me that he and I were the two most important people in the wedding. My brother Michael walked me down the aisle.

Once everyone was seated inside the church, my soon to be brother-in-law Mike sang “Evergreen” and then later in the ceremony he sang the beautiful “Wedding Song” by Noel Paul Stookey of Peter, Paul, and Mary fame. I heard the song playing on the radio one day while we were planning the wedding and knew I wanted that song. After we said our vows, everyone bowed their heads for a prayer. I remember having my eyes closed, hearing soft music, and thinking “who is playing music during my wedding!” Stupid me didn’t realize that Mike had started quietly playing the guitar as the minister finished the prayer. Once the prayer ended, Mike started singing the song. I still smile when I think about it today. Mike’s performance was beautiful and is a fond memory of my wedding. I just listened to the song and still think it was a good choice.


We lit unity candles and I remember Charlie’s hands shaking so much I think the candle almost went out. I can still see us waving our fingers trying to will the flame to keep burning.

After the ceremony, we were driven to the reception by Charlie’s friend Eddie in his classic car.

Mike’s band played during the reception and was a great hit. They were a local favorite so many people already knew and loved them. I distinctly remember the fiddle player standing on top of a table playing the heck out of his fiddle when the band played “The Devil Went Down to Georgia.” He brought the house down with his performance.


My co-worker and friend Jan was our bartender. Charlie and his Dad had made a run to Washington, DC to stock the bar. They probably would have been arrested for transporting too much liquor across state lines if they’d been stopped! Charlie told me he was going to ask Mama to dance with him during the reception. Having never seen her dance, I told him that wouldn’t happen. We had a bottle of Cold Duck at the bar and told Jan that was just for Mama to give her a little encouragement. Charlie got his dance.


When it was time to cut the cake, I was so gentle when I fed Charlie his bite. He on the other hand, was not so gentle and shoved the cake into my mouth. I had never heard of such a thing and couldn’t believe he had done that. Of course, now I know it’s just something people do. I don’t like that tradition.

My sister Vanessa caught the bouquet and Charlie’s brother Pat caught the garter. As tradition has it, Pat then had to put the garter on Vanessa. When he took the garter a little higher than Michael felt he should, Michael jumped in and told him that’s high enough! He was smiling when he said it. We all got a kick out of it.


Charlie and I left the reception in his faded 1965 Mustang trashed by unknown individuals. 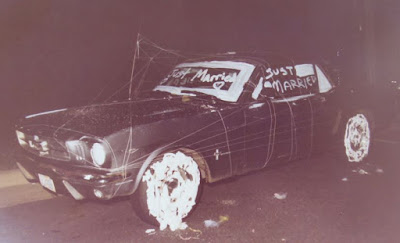 All in all, the day was a blur but I have many fond memories. At 37 years, I figured I’d better write them down before I forget some of them! 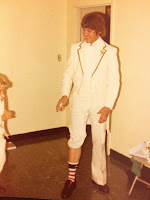 While our families were involved in our wedding, thinking back, I don’t recall putting any thought into including them in ways that my son Chris and his wife Ashley included ours in their 2013 wedding. She and Chris honored our families in three ways which I thought were very touching.

The first thing was my son wearing his Dad’s wedding socks. I blogged about that last year. Click here if you’d like to read that story. Who knows if we’ll have a grandson who would one day buy into this tradition or if the socks will even survive that long. Only time will tell.

The second thing was the clay bowl they made for the ring bearer to carry in the wedding. Ashley found the idea on Pinterest and thought one of Mama’s doilies imprinted in the bowl would be cute. I think she was right. I was happy Mama came to Virginia for the wedding and could see it for herself. Here’s a few pictures of Chris and Ashley making the bowl, one with the ring bearer holding the bowl during the ceremony, and a picture of it on display at the reception. 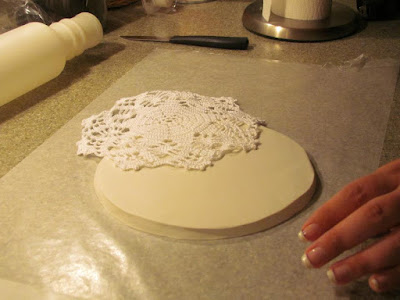 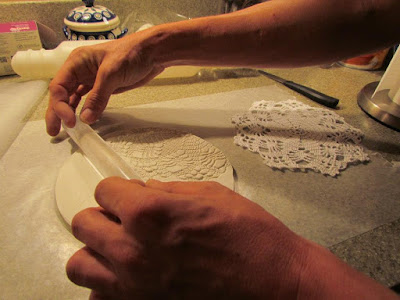 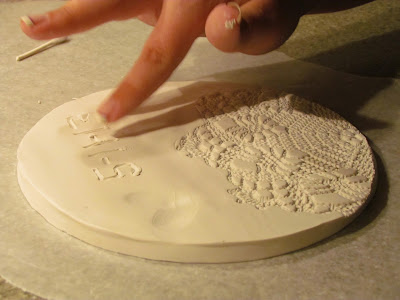 The third thing was Ashley’s “something borrowed.” She asked me if I had something she might use for this traditional wedding piece so I pulled several items out of my jewelry box to see it something fit the bill. She picked my mother-in-law Mary’s 1929 mercury dime to pin on her garter. The dime had been wrapped in silver and had a loop at the top so it could be worn as a necklace, something Mary often did when she dressed up. The dime was special to Mary as she was born in 1929. I’m sure she would have loved the young woman her grandson picked for his bride and would have been honored to have loaned the dime to Ashley to use as her something borrowed as she walked down the aisle. But now looking back, if I’d remembered the dime my flower girl gave me to carry in my wedding, I would have asked Ashley if she too wanted to carry it in her wedding. Interesting that she picked my mother-in-law’s dime. That should have been a hint to me. I consider that a missed opportunity! 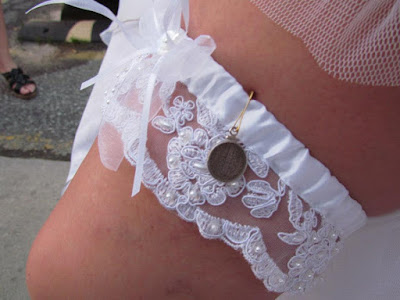 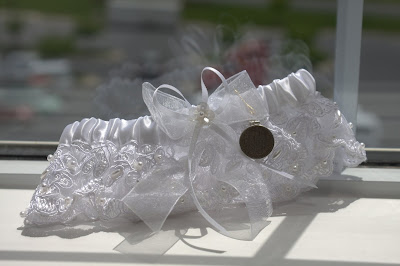 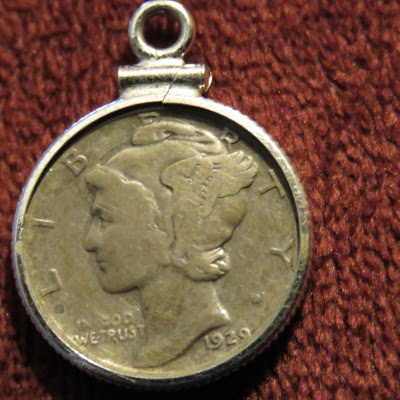