The 52 Ancestors theme this week is “taxes” so I’m writing about someone in my husband’s family that did taxes for a living.

William Edgar Piper, son of George Ray Piper, Sr. and Effie Dunlap McConnaughey, was born on January 26, 1924 in Ligonier, Westmoreland County, Pennsylvania. He had a sister named Catherine Jane Piper and a brother named George Ray Piper, Jr. He was most likely named for his paternal grandfather, William Edgar Piper, who was killed in a September 1937 mining accident at the Marietta Mine in Ligonier. He went by Bill and was the husband of my husband’s first cousin 1x removed. Bill and my husband have no common relatives.

On April 3, 1930, Bill and his family lived in a rented house on West Market Street in Blairsville, Indiana County, Pennsylvania. At age six, he was attending school. His father was a bookkeeper in a coal mine.

On April 30, 1940, Bill and his family lived in Truxall, Bell Township of Westmoreland County, Pennsylvania. His father was still working as a clerk at the coal mine. Bill was 18 years old when he registered with the U.S. Army in 1942. At the time, he lived in Truxall and worked at Truxall Mine for the Westmoreland Mining Company in Blairsville. Bill had a ruddy complexion, blue eyes, and brown hair. He was 5’, 10” tall and weighed 145 pounds. Bill entered active service with Company L of the 87th Infantry in Greensburg, Westmoreland County, Pennsylvania on April 30, 1943 and was sent overseas to fight in World War II (WWII). His service ended at the McGuire General Hospital in Richmond, Virginia on December 19, 1945. I don’t know the circumstances of his injury, but Bill lost a leg during the war.

Bill married Alma Margaret Smith, daughter of Howard Stanley Smith and Myrtle Mary Stewart, in 1946, most likely in Apollo. Together they had three children during the 1950s—Jeffrey William Piper, Brian Edgar Piper, and David Alan Piper. During their marriage, Bill and Alma owned and operated Piper’s Jewelry Store in Apollo for 12 years and Piper’s Accounting Service in Kiski Township for 32 years. It doesn’t surprise me that Bill opened an accounting business since his father was a bookkeeper himself.

On May 19, 1950, Bill received $335 from the Commonwealth of Pennsylvania, a bonus compensation paid to honorably discharged veterans and those still in active service. For serving 29 months of active domestic service, Bill received $290. For 3 months of active foreign service, he received $45. It doesn’t seem like much money for what the men who fought WWII went through but I image it was welcome income.

Alma was my mother-in-law Mary (Athya) Murphy’s cousin. Mary often spoke fondly of Alma. As young girls, they lived fairly close so most likely saw each other often, at least enough that they exchanged letters most of their adult lives. I have some of Alma’s letters to Mary which I’ll use to fill in some of the dashes of Bill’s life in this blog post. 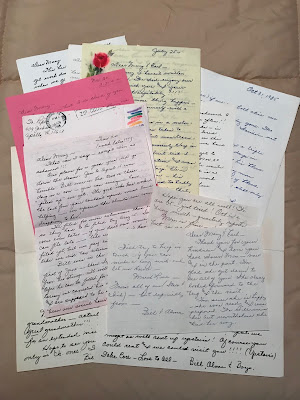 In 1959, Bill ran for and was elected as Armstrong County’s treasurer—the “first Democrat to be elected to a courthouse office in 40 years” according to the Daily Leader-Times in Kittanning. He was sworn in on December 31, 1959. The Armstrong County Young Democrats held a banquet in July 1960 to honor him for this achievement. After leaving office in 1963, auditors discovered that funds amounting to $9,180.65 were missing from the treasurer’s office—$5,102.13 from the Tax Claims Bureau and $4,078.52 from the general fund. A female clerk who worked in Bill’s office was eventually charged and found guilty of embezzlement in the case. According to the Daily Leader-Times, “The jury accompanied the verdict with a recommendation for leniency, “because of the inadequate supervision of the treasurer’s office.” The Insurance Company of North America, the bonding agent for Bill and his employees, felt Bill was responsible as he should have been aware of what was going on in his office.

At some point in the late 1970s or early 1980s, Bill’s son Brian was involved in a motorcycle accident and badly injured. His left kneecap and collarbone were both shattered and he had a compound fracture near his left wrist. Alma wrote in one of her letters that “the bones were so smashed, they had to shorten his arm.” She also wrote that “a nerve was severed by a bone fragment.” He had no feeling in his fingers and thought his arm was laying across his chest when it was actually suspended from an IV stand. Brian never regained the use of his arm.

Bill retired at the end of 1985, although he still planned to do the tax returns for his monthly clients—just a few of the simple ones. Once they got past tax season, Bill and Alma planned to visit family and clean up a much-neglected house (her words, not mine). But late the next year Alma had a heart attack. That, along with complications from diabetes that Alma had suffered from for the past 12 years, put a halt to their plans. Bill had health issues of his own as well—a hernia that caused him to choke on food, gall bladder issues, and three prostrate operations. He nearly died at one point on September 21, 1985 although Alma’s letter doesn’t mention from what. Bill lost a lot of blood though and had to have his stomach pumped. In 1986, Alma wrote that the period of January to April 15 was horrible. Bill was sick in bed for several days in a row and work got “piled up.” She said they filed for more extensions than ever that year and it seemed like they did tax returns all year. Bill was again in the hospital in May and June that year, and then on September 17 had one and a half inches amputated from what was left of the leg he lost in World War II. He had to wait several months before he could be fitted for a new leg. Alma wrote that their social hours those days were going to the doctors! Bill was still in the midst of doing sales tax reports and had to work through a lot of pain. Bill and Alma did manage to get some work done on the house that year—new garage doors, new floors, part of a wall re-built, the living and dining rooms painted, new living room furniture and blue carpet—but still needed to paint the other rooms in the house and replace the carpet. Those would have to wait until the next year though, like so many other things. In a Christmas card one year, Alma wrote “Next year—honest—after taxes we are going to do some things. Heck with the house and yard.” In another Christmas card she wrote “Hope you are all well and able to enjoy the holidays. Surprise us May, June, August, September, November, or December!!! January, February, March, and April we might as well rent up upstairs!” If you work in the tax business, you basically give up a good part of your year.

On November 9, 1992, Bill lost his wife Alma to stomach cancer. She was buried at Riverview Cemetery in Apollo. Less than three years later, Bill died at home in Apollo on June 9, 1995. Sadly, the cause of death listed on his death certificate was a self-inflicted gunshot to the chest. Bill was laid to rest beside Alma at Riverview Cemetery. 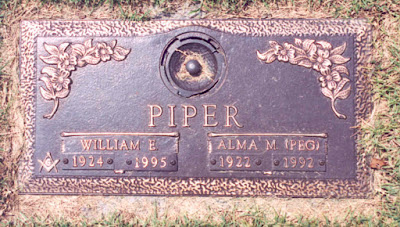 In Alma’s letters, she often spoke of not being able to take time off due to work or health issues. There were many promises of “next year.” I hope at some point they were able to make that time before their deaths.