The 52 Ancestors theme this week is “first,” so I thought I’d take a deep dive look at my mother-in-law Mary Athya Murphy’s first grade class photo. At some point, Mary wrote names across their chest for most of the children in the photo so many of them are identified. Sometimes it was their full name, sometimes just a first or last name. Hopefully it will be enough to help another researcher find an ancestor if they find this blog post and photo.


Mary attended first grade in Paulton, Pennsylvania during the 1935 to 1936 school year. According to the Pennsylvania Gazetteer, Paulton “is a populated place located within the Township of Washington, a minor civil division of Westmoreland County” and is located about 35 miles from Pittsburgh. The photographer, a person named Collins, took the photo on September 17, 1935—two facts I only realized when I started writing this blog post—and I’ve looked at this photo many times. Unfortunately, I don’t know the name of the school. Mary once told me that she attended Washington Township Grade School through the eighth grade, beginning at age seven, but I don’t know if she was attending that school when the photo was taken. In 1935, she would have only been six years old so was there another school? I just don’t know. 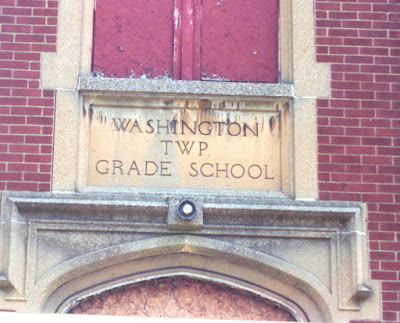 Several things come to mind when I look at the photo: (1) No one is smiling. Were all 29 students and the teacher told not to smile or did it just happen that way? (2) September 1935 in Paulton must have been warm. All but one of the boys were wearing shorts, although several of them were wearing long sleeved shirts or what looked like sweaters. (3) All of the boys have their arms folded across their chest. (4) All of the girls have short hair. I think of all the little girls I see today with long hair and wonder why all of these little girls had short hair.

I’ve transcribed the names Mary wrote on the photo to the best of my ability. If you recognize anyone and can provide the correct name, feel free to leave a comment. I’m happy to update the information. All names are listed from left to right.