On September 24, 1850, the Tuck family lived in Division 88 of Walton County, Georgia. George’s father was a farmer with real estate valued at $600. They had a full house with two adults and 10 children living together. George married Martha Ann Ivey, daughter of Allen Elbert Ivey and Emily Upshaw, in Walton County, Georgia on December 22, 1859.

On June 22, 1860, there is an 18-year-old male named G. W. Tuck, a day laborer, living with the T. Edwards family in Loganville, Walton County, Georgia. If this is George Washington Tuck, there is no sign of wife Martha in the record. At age 18, G. W. Tuck would have been born about 1842, which is five years after George was born. I searched all of Walton County though and don’t find any other males named George or George W. Tuck so it’s very possible this is him.

America changed on April 12, 1861 with the start of the Civil War. The 11th Georgia Infantry formed that spring, including men from Walton County, Georgia where George lived. The 11th “mustered into service in July 1861” and then traveled by railway to Richmond, Virginia. They trained at the Richmond fairgrounds for a short period until time for their march to Manassas for what would be known as the First Battle of Bull Run. They arrived on July 21, the day after the battle due to a road blockage along the way, so missed the battle. Luck was on their side that day. The 11th spent winter camp in Center Hill, Virginia which is located 218 miles from Manassas. Life in camp was hard during the winter months, many men died from illness and others were discharged from service. The troops were depleted enough that “Lieutenant Henry D. McDaniel returned to Georgia for recruits.” George wasn’t part of the initial April 1861 enlistment but did join Lieutenant McDaniel and the other new recruits, enlisting as a private in Company H at the Orange County Courthouse in Virginia on March 6, 1862. Martha was pregnant when George left home. 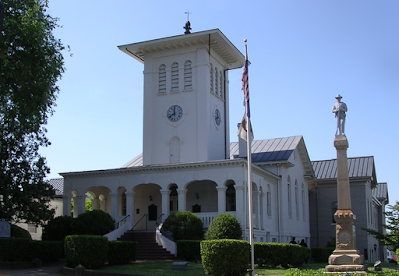 Conditions in camp were poor. When moving, the privates of the 11th Georgia Infantry were told to abandon everything they could not carry. They were exposed to poor weather conditions with no tents or blankets. They had few axes and wood to build fires was scarce. Unsanitary conditions led to disease and it wasn’t long before George contracted typhoid fever. Suffering from diarrhea, George was admitted to Chimborazo Hospital No. 1 in Richmond, Virginia on May 20, 1862. He died there on June 3, 1862.

A descriptive list and account of pay and clothing form submitted for George after his death tells us that he was a farmer from Walton County. He had blue eyes, dark hair and a dark complexion. George was 5’11” in height.

George’s father Claiborne Tuck had been named the administrator of his estate on October 6, 1861, before he enlisted in the 11th Georgia Infantry. After George’s death, his father hired attorney’s Hill and Norfleet to handle the estate. They filed for settlement of George’s last pay ($32.63) and a clothing allowance ($25) on November 12, 1862. The Quartermaster General of the Confederate States was aware of the filing in December 1862; however, it wasn’t reported to the Comptroller until September 4, 1863. Major John Ambler, Quartermaster C.S. Army, issued Treasury Certificate number 8367 in the amount of $57.63 to Hill and Norfleet on September 21, 1863.

An administrator’s bond was recorded in Walton County on October 8, 1862. That record shows that Claiborne Tuck and Zachariah Blanchett, husband of George’s sister Tabitha, were “held and firmly bound” to the courts of Walton County on October 6, 1862 in the amount of $1,200 to make an inventory of George’s goods, chattels, lands, rights and credits.

Six of the seven Tuck brothers served the South during the Civil War. Four served together in the 11th Georgia Infantry—Josiah, Seaborn, John, and George. Two didn’t come home—Josiah and George. Josiah was killed in action on August 30, 1862 during the Second Battle of Manassas. George, as we know, died in Richmond on June 3, 1862. Brothers Seaborn and John were both wounded in the Second Battle of Manassas, the same day Josiah was killed, August 30, 1862. John was wounded again in Knoxville, Tennessee on October 16, 1863. He fought till the end and was present at the surrender in Appomattox, Virginia on April 9, 1865. Brothers James and Benjamin both served in Company G of the 42nd Regiment, Georgia Infantry, also known as the Walton Blues. James was taken prisoner of war in Vicksburg, Mississippi and then paroled in 1863. The last Company Muster Roll for James dated December 11, 1863 shows he was home sick in Walton County. James died in 1864. Benjamin enlisted in Monroe, Walton County on March 4, 1862. He died in Acworth, Cobb County, Georgia just a month later, on April 8, 1862. The Tuck family paid a high price for the South.