On June 16, 1870, the Lankford family lived in Penfield, Greene County, Georgia. His father worked as a common laborer while his mother stayed home keeping house. Of the six children in the home, only John was shown with an occupation in the census record—farm laborer.

By June 7, 1880, the Lankford family had moved to the Bowling Green District of Oglethorpe County, Georgia. His father worked as a well digger, his mother kept house, and Charlie kept busy as a farm laborer. His brother Hampton was attending school but appears to be the only child at home doing so at the time.

On June 1, 1900, Charlie and his family lived in the Bowling Greene District of Oglethorpe County, Georgia. Charlie worked as a farmer. Minnie and Maude were both enumerated as “Mary” in the census record. The census enumerator noted that Minnie had given birth to three children, two of which were living. I have yet to find a record for the birth or death of this child.

I have been unable to find Charlie in the 1910 census but will keep looking. When Charlie’s son Horace filled out his World War I registration card on September 12, 1918, he noted that he was employed by his father whose place of business was in Rayle, Wilkes County, Georgia. Horace also noted that his father was his nearest relative and that he lived in Rayle.

On February 2, 1920, Charlie lived on Washington Road in the Bowling Green District. In this census record, his last name was spelled Langford. He worked as a farmer on a general farm. Horace, the only child left at home, worked as a farm laborer on a home farm. Daughter Maude lived next door with her husband Andrew and daughter Knollie.

On April 19, 1930, Charlie, Minnie, and Horace lived in Taliaferro County. At age 64, he had apparently retired as his occupation was enumerated as “none.” Horace worked as a laborer, hauling lumber. Charlie’s daughter Maude lived next door with her husband Andrew, widowed daughter Knollie, and granddaughter Estelle Fulcher. Minnie died of senility at age 71 in Penfield on March 9, 1939. She was buried at Bairdstown Cemetery in Bairdstown, Oglethorpe County, Georgia.

On April 2, 1940, Charlie lived with his daughter Maude and her husband Andrew McElreath in Union Point, Greene County, Georgia. They were joined in the home by Horace and his wife Rosie, as well as a cousin of Andrew’s, M. D. Adkins. They had been living in the home since 1935. The only member of the family working was Andrew and he was a brick mason. Those not working were not seeking work according to the census enumerator.

Charlie died on July 14, 1947 at his home in Shiloh, Greene County. He was buried beside Minnie at Bairdstown Cemetery following a service a Bairds Baptist Church the following day. The Oglethorpe Echo carried a notice of Charlie’s funeral on July 24, 1947:

Mr. Charlie Lankford, son of Mr. Curt Lankford of Civil War fame, was buried here (Bairdstown) last Wednesday with the Rev. O.L. Duval officiating. Mr. Lankford was well advanced in age and had been blind for several years. His funeral was well attended by a host of friends and relatives. 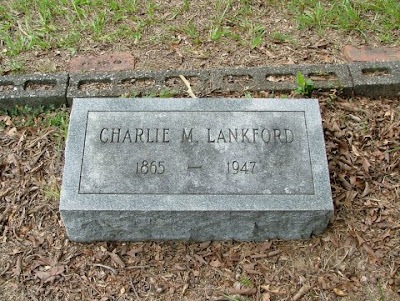