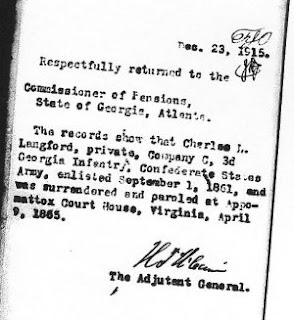 Charles L. Lankford, born August 25, 1842 in Greene County, Georgia, was the son of William A. Lankford and Nancy Goodman. He lived in Georgia his entire life and was a farmer.

He enlisted as a private in Company C (Dawson Grays) of the 3rd Georgia Infantry, Confederate States Army, on September 1, 1861. He claimed residence in Greene Co., GA and was enrolled by Capt. McWhorter for a period of one year. The engagements at which he was present include Second Manassas, Malvern Hill, Gettysburg, Chancellorsville, Virginia, the siege around Richmond, and Petersburg, Virginia.

Charles filed for a confederate pension in Monroe, Walton County, Georgia. A 1894 pension application states that "applicant aluminous nephritis, suffered all the time with his kidneys, in almost continuous pain in his back day and night or ("chronic lumbago,") which disqualifies him for all manual labor by which he can earn a support.

A record dated September 17, 1901 shows that he was admitted to the Confederate Soldiers' Home of Georgia. He died in October 1901.
Posted by Denise at 8:19 PM