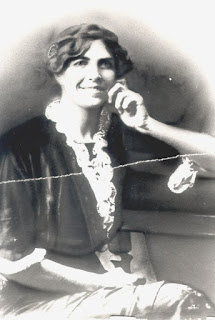 Dessie Church, born February 23, 1889 in Wetzel County, West Virginia, was the daughter of Robert Church and Lucinda Murphy. She descends from Henry Church Sr., AKA "Old Hundred" for whom the town of Hundred, West Virginia was named. Henry fought for the British Army under Cornwallis and was captured by American troops under Gen. Lafayette. He died in 1860 at the age of 109. Dessie married Charles Homer Murphy on December 16, 1914 in Hundred. Dessie and Charles raised five children in Littleton, West Virginia where she died on November 24, 1940. She's buried at the bottom of the hill at Thomas Chapel Cemetery in Littleton.
Posted by Denise at 9:33 AM