Virginia never knew her oldest brother Frederick who was born in 1900 and died in 1901. He was buried at Apollo Cemetery in Apollo, Armstrong County, Pennsylvania. Virginia’s brother Joseph, born a year after Virginia, died on January 15, 1911 in Vandergrift, Westmoreland, Pennsylvania. He was also buried at Apollo Cemetery. Joseph was just six years old. The New Kensington, Pennsylvania, City Directory recorded Virginia’s parents living at 181 Washington Avenue in New Kensington, Westmoreland County, Pennsylvania in 1911. Her father worked in brick manufacturing. They lived in the same home in 1915. Her father worked in “billiards” at 120 Grant Avenue.

On January 3, 1920, Virginia and her family lived on North Fourth Street in Apollo. Her father worked in real estate and insurance. Virginia, a member of the class of 1921 at Apollo High School, was featured in their yearbook during her senior year: 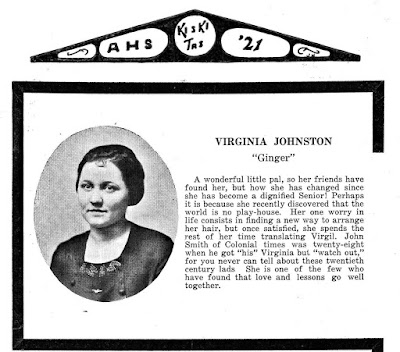 From the “Classified Section” of the same yearbook:


Dedicated to Virginia Johnston, ’21.
She is a very modest girl
She certainly is shy
She wears smoked glasses, so she won’t
Expose her naked eye. 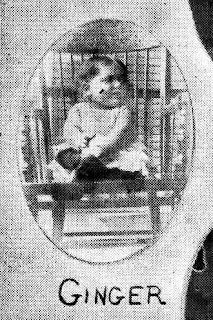 About 1925, Virginia married John Thompson Smith, son of John Milton Smith and Amanda Larimer Horne. Together they had two children—Lois Kimmel Smith and Russell W. Smith. Virginia and John welcomed Lois to the family in September 1928. They gave Lois the middle name of Kimmel which was also Virginia’s middle name. Virginia’s paternal grandmother was Sarah A. Kimmel so this was a nice way to carry on a family name.

On April 12, 1930, Virginia, John, and Lois lived in Paulton, Westmoreland County, Pennsylvania. The census enumerator recorded Virginia as 22 and John 23 when they married. They owned their home valued at $5,000. There was a radio in the house that year. Her husband John was a clerk in a steel mill. Virginia’s mother Emma, who had been sick four years, died in Apollo on November 4, 1933 of melanotic sarcoma. She was buried at Apollo Cemetery. Virginia must have been pregnant at the time of her mother’s death as her son Russell was born in Apollo on May 27, 1934.


On April 5, 1940, Virginia and her family lived in Paulton with John still working as a clerk in a mill office. They had boarders living in the home named Grace Gally and Mary Witherspoon. Both were teachers in the Washington Township which is not surprising as Virginia was a teacher herself. Virginia’s father died of coronary occlusion on July 10, 1942 in Allegheny Valley Hospital in Harrison, Allegheny County, Pennsylvania after a fall. He was buried at Apollo Cemetery. He lived at 500 North Fourth Street in Apollo at the time of his death.


Virginia’s husband John died at the Belair Nursing Home on September 23, 1969 in Lower Burrell, Westmoreland County, Pennsylvania. He was buried at Greenwood Memorial Park in Lower Burrell. Virginia moved to Florida after John’s death to live with her daughter.

Virginia died at the age of 83 in Fort Lauderdale, Broward County, Florida on March 12, 1986. She was brought home to Pennsylvania and buried at Greenwood Memorial Park beside her husband.