On June 11, 1860, one year old Amanda lived with her family in the Peebles Township of Allegheny County, Pennsylvania. Her 70 year old widowed grandmother, Mary (Brown) Horne, lived with them. Amanda’s father was a carpenter.

I haven’t been able to find the Horne family in the 1870 census records. Amanda’s brother George was born in Apollo, Armstrong County, Pennsylvania on December 1, 1869 so I expected to find them there. I ran a search on ancestry.com and found nothing. Since that didn’t work I manually checked the 20 pages of Apollo census records and still found nothing. Disappointing to say the least since you never know what piece of information you might find. I'll keep looking.

Amanda was received by probation at the Apollo United Methodist Church on October 25, 1874.

On June 25, 1880, Amanda and her family lived in Apollo. At age 20, Amanda still lived at home and was employed as a dressmaker. It was exciting to make the discovery of her occupation as it explains how she was able to sew such a beautiful gown four years later for her two year old son Benjamin. Amanda’s father, Moses, was a “dealer in groceries.” Her 10 year old brother George was a store clerk, perhaps helping his father.

On June 25, 1900, Amanda, John, and their children lived in the Washington Township of Westmoreland County, Pennsylvania. Amanda’s husband was a rougher in a sheet mill. Benjamin was a clerk in some sort of depot (I’m unable to read the type of depot in the census record). Her youngest son John was born a year and a half later on December 21, 1901.

On October 24, 1906, Amanda’s 18 year old daughter Edith, blind as the result of measles, died of typhoid fever at Mercy Hospital. Edith had been a resident of the West Pennsylvania Institute for the Blind for 16 days prior to her death. Edith was buried at Riverview Cemetery in Apollo.

On April 26, 1910, Amanda, John, and five of their children lived in Paulton, Washington Township, Westmoreland County, Pennsylvania. The census enumerator recorded Amanda as the mother of seven children, six of which were living. Her husband John was a roller helper in a sheet mill. Both Ben and George worked in the sheet mill as a doubler. Her son Howard no longer lived at home.

The 1910s was a decade of loss for Amanda and her family. Her father Moses died in Apollo on April 11, 1910. He was buried in Apollo, most likely Apollo Cemetery. Two years later, her life was shattered when her husband John died on March 9, 1912 at the age of 61 of cardiac dropsy in the township of Bell, Westmoreland County, Pennsylvania. John was an ironworker for the U.S. Steel Corporation at the time of his death. He was buried at Riverview Cemetery in Apollo. A year later her mother Elizabeth died in Apollo on May 1, 1913. She was buried at Apollo Cemetery. That same year, the Smith family suffered another sad loss when their daughter Helen died in Paulton from endocarditis, an inflammation of the inner layer of the heart, at the young age of 17. Helen was buried on March 20, 1913 in the family plot at Apollo’s Riverview Cemetery. She shares a tombstone with her parents and sister Edith. And finally, Amanda’s brother George died on December 19, 1915 from a fractured skull and other injuries caused after being struck by a locomotive on the Conemaugh Division of the Pennsylvania Railroad at the West Apollo Crossing. He was buried at Vandergrift Cemetery in Vandergrift, Westmoreland County, Pennsylvania.

On January 26, 1920, a widowed Amanda lived on Greensburg-Apollo Road in the Washington Township of Westmoreland County, Pennsylvania. She still had four adult children living in the home with her—Benjamin, George, Bertha, and John. Her sons all worked in the steel mill—Benjamin as a catcher, George a ruffer, and John an addressographer. Twenty-two year old Bertha was unemployed and probably helping her mother maintain the household and cook for the three hungry men in the house.

Amanda’s sister Lydia died in Pittsburgh on October 2, 1923. She was buried at Vandergrift Cemetery.

In late 1926 or early 1927, Amanda, wanting to help her daughter Bertha with her growing family, took her two year old grandson John Athya home to stay with her and Benjamin. They planned to keep John there until Bertha got back on her feet after giving birth to her second son Howard. However, as young as John was, he decided he wanted to stay with his grandmother and uncle. He’d only been staying with them a few weeks but he had visited often so was comfortable with them. It hurt Bertha’s feelings but she realized it was best for her as living on the second floor with two children, having to carry laundry, groceries, etc. would be hard so she allowed him to stay with his grandmother and uncle.


On April 8, 1930, Amanda, Benjamin, and John lived in the Washington Township of Westmoreland County, Pennsylvania. Benjamin was a laborer in the steel mill. 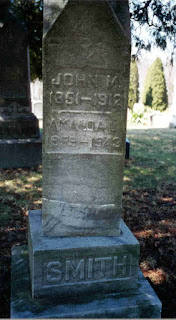 Amanda’s sister Josephine died on March 24, 1941. She was buried at Apollo Cemetery.

Amanda’s daughter Bertha and son-in-law George Athya moved in with Amanda in the early 1940s after they lost two houses—one to taxes and one when the Kiskiminetas River flooded in Apollo. Amanda was bedridden from a stroke and died of cardiac insufficiency in Washington Township on January 11, 1943. She was buried in the family plot with her husband John and daughters Edith and Helen at Riverview Cemetery in Apollo. Bertha and George moved their family to Warren, Ohio after Amanda’s death, however, John chose to continue living with Benjamin. He finally joined his family in Warren after he graduated from high school.