On May 3, 1910, Blaine and his family lived in Civil District 13 of Sevier County, Tennessee. The census enumerator recorded him as Arthur B. Shields. He was not attending school. Blaine’s oldest brother and my great-grandfather, Stewart, had already married Hattie Jane Rhinehart and moved out of the home.

Sometime between 1910 and 1913, Blaine’s father moved the family to north Georgia where it was felt farm land was better and cheaper than the mountain land around Sevierville. Cas went alone and bought a farm on top of a hill with a long drive between Praters Mill and Deep Springs and then headed back to Sevierville to get the rest of the family. They traveled to Dalton using two two-horse wagons, each pulled by two mules with two cows, four dogs, two coops of chickens, and all of their furniture. The children walked and rode in the wagons. The trip, which was approximately 120 miles, took 8 to 10 days. They camped by creeks and in farmer’s fields. It was more like a picnic to them.

On January 3, 1920, the family lived on Lower Varnell Road in Varnell, Whitfield County, Georgia. Blaine was again recorded as Arthur B. Shields. At age 14, he was not attending school, nor could he read or write.


On February 10, 1930, Blaine’s sister Maude (Shields) Horrell died at the age of 15 in Georgia. Her last name was Horrell so it’s assumed she was married. Its possible Maude died in childbirth. She was buried at Grove Level Community Cemetery in Dalton. I haven’t been able to find any other information on Maude.

On April 19, 1930, Blaine and his parents lived at Praters Mill and Deep Springs Roads in the Lower Tenth District of Whitfield County. He was now the only child left at home. His oldest brother, Stewart, his wife Hattie, and their eight children lived next door. Blaine’s father was a farmer on a general farm. Blaine was recorded as a laborer on a general farm so I assume he was helping his father work the farm.

On April 3, 1940, Blaine and his parents still lived at Praters Mill and Deep Springs Roads in the Lower Tenth District of Whitfield County. The neighbors were different than in 1930 so it may have been a different house. It’s a same house they lived in 1935 though. His brother Milas lived five houses away. The census enumerator noted that the highest grade Blaine had completed as “0” which confirms what a cousin told me. No one in the house was working. His father, retired at age 70, no longer needed Blaine to help on the farm.

Pearl (Shields) Hester, Blaine’s 33-year-old sister, died of tuberculosis on July 26, 1941 at their parent’s farm in Dalton. It was said you could hear her breath outside on the porch. Pearl left five young children behind ranging in ages from 2 to 11. She was buried beside her sister Maude at Grove Level Community Cemetery in Dalton.

Blaine’s mother died in Dalton on July 10, 1961 at the age of 91. She was buried in the family plot at Grove Level Community Cemetery in Dalton. After her death, Blaine moved in with his sister Addice.

His sister Addice died in Dalton on March 2, 1988. She was buried at Bethel United Methodist Church Cemetery in Dalton. I don’t know if Blaine was still living with Addice at that time but at some point, he moved to the Wood Dale Health Care Center in Dalton where he died on September 6, 1988 at the age of 83. Blaine was buried beside his parents and sisters Pearl and Maude at Grove Level Community Cemetery in Dalton. The Dalton Daily Citizen News published his obituary on September 7, 1988: “Mr. Blaine Shields, 83, of the Wood Dale Health Care Center, died Tuesday morning, Sept. 6, 1988. He is survived by one sister, Mrs. Janie Bennett of Los Angeles, Calif.; several nieces and nephews. Funeral services were Wednesday at 2 p.m. from the Julian Peeples Memorial Chapel with the Rev. Dan Carter officiating. Burial was in the Grove Level Cemetery. Julian Peeples Funeral Home of Dalton is in charge of arrangements.”

Fifteen years ago my sister and I worked with other family members to document our Shields family history. Elmer Shields’ son Tommy shared his memories of Blaine:


“Oh yes! I remember Blaine. He was my favorite uncle from either side of my family. Some said he was retarded, but he was not. He stuttered very badly and never went to school, but three weeks. His school story—because of his stuttering Grannie and Grandpa did not send him to school until he was older. By then the other children were smaller and made fun of him because he stuttered. He got into fights every day. He had gone about three weeks when his teacher decided to whip him for fighting. She hit him, he hit her, and then she sent him home for good.

It was a blessing for Grannie and Grandpa as Blaine “totted” and “fetched” for them for the rest of their lives. They loved him and showed it in many ways but they used him as a servant. He would grumble but would do whatever they told him to do.

He was a good worker. He never held a job per se but when someone in the neighborhood needed help they would hire Blaine. He labored diligently for less pay. His brothers hired him to help once in a while, but mostly he made a garden with Grannie overseeing. He cut wood for heat in winter and cooking, summer and winter. He almost cut his little finger off cutting wood. It was badly scared and stiff.

He always had a crush on Gussie Cross. After she married Milas, Blaine never spoke of her again.

My father built them a home in Port Orange, Florida. Blaine didn’t like it there. They only stayed two or three years. He was glad to get back in the country next to Milas where he could have his chickens and a garden.

Blaine didn’t like to take baths but after a week or two Grannie would say, Blaine you are getting too ripe, fix yourself a tub. He would grumble but like a child he would heat water on the cook stove, pour it in a washtub, and kneel down and clean up good. Grannie would get him clean clothes. He would come out smiling.

He also used Bruton Snuff. Anytime you would say Grannie, do you need anything from the store, she would say no but Blaine could use some Bruton. She’d look at him and he’d grin and say yes and some ho-ho-ho-hor-hor-hound ca-ca-ca-candy. 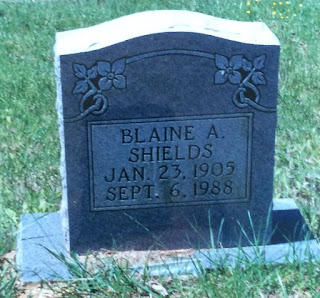 The warmth of his heart showed through at every occasion—very sweet and innocent. Never more so than at a death. When Pearl died he couldn’t stop crying. When Grannie died I was not there but I saw him at Addis’ later. He told me Ma’s gone to be with Jesus, and he cried for a long time. I saw him in the rest home after Addis died. He cried and said si-si-si-sis went to heaven. I don’t remember seeing him after that but when they called me at his death, I couldn’t stop crying, as I sure loved ole Blaine. It brings tears to my eyes just writing about him. He was special. A kinder, gentler heart than any of his brothers and sisters. Everyone used to say, “I feel sorry for Blaine.” I didn’t. He laughed more, loved more, and was loved by all the family. A kind and gentle soul. I learned a lot from him. I used to kid him. We would laugh and pick at each other. He would say you-you-you-you-go-go-go-go-get-so-so-so-so-sm-sm-smart-yo-yo-yo-you-get—no-no-no-supper. We should all aspire to be so loving. Cas and Martha passed on to us a gene or trait of not being able to say “I love you.” This has gone down to the 5th generation. Let’s hope it stops there. Blaine never owned anything, but he always had enough. Grannie and Grandpa housed and kept him most of his life, then Addis housed and kept him until he went into the rest home. Papa (Elmer) had a small burial policy on him, then Kenneth Palmer (Addice’s son and Blaine’s nephew) paid the rest of his funeral and other expenses. So they didn’t say “I love you,” but for Blaine they certainly showed it."

Everyone loved Blaine and he loved everyone. Blaine never married or had any children.
Posted by Denise at 8:20 PM