When Willie was eight years old, he experienced death for possibly the first time when his sister Tabitha died in 1898 at the young age of two years. The circumstances of her death are unknown to me as I haven’t found a death record for her yet. She was buried at Anderson Bethel Cemetery in Littleton, Wetzel County, West Virginia.

On June 23, 1900, William and his family lived in Littleton, Wetzel County, West Virginia. At age 10, Willie was unable to read and write. Does that mean he hadn’t attended school? It’s hard to say. His father was a teamster.

On April 27, 1910, 18 year old Willie still lived at home in the Clay District of Wetzel County. He and his brothers Edward and Charles were all teamsters in an oil field, although Willie had been out of work for 20 weeks according to the census record. His father was now farming.

Willie lost another sister when Essie died in Warwood, Ohio County, West Virginia on May 25, 1915. Essie left three small children behind. Her husband Frank Oscar Grimm married their sister Cecil about 1919 or 1920 and they had four children together. I have yet to find a death record for Essie or the location of her burial.
Willie registered for the World War I draft in Wetzel County on June 5, 1917. He recorded his birth year as 1891 vs. 1890. Willie was a self-employed farmer living near Littleton. He stated that his mother was dependent on him for support and claimed exemption from draft for that reason. The registration card shows that Willie was of medium height and weight, he had dark blue eyes, and light brown hair. He enlisted in the U.S. Army on March 7, 1918 and was honorably discharged on March 19, 1919 as a Private First Class after serving in the medical department camp hospital at Camp A. A. Humphreys in Fort Belvoir, Fairfax County, Virginia.

On January 14, 1920, at age 28 Willie was still living at home, along with two adult siblings—his 24 year old brother Arliff and 18 year old sister Addie. It appears that the only person working in the home was their father who was supporting the family through farming.

Willie’s mother died in Littleton on April 1, 1927. Five days later, his father died on April 6 in Mannington from a cerebral hemorrhage. Both of his parents were buried at Anderson-Bethel Cemetery in Littleton. 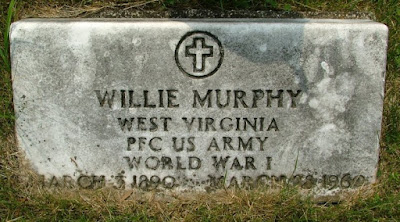 On April 8, 1930, Willie lived alone in the Clay District of Wetzel County. He owned his home which was valued at $700. Willie was an operator in a filling station. The census enumerator recorded his birth year as 1892.

Willie lost two brothers during the 1940s—Arliff who died in Wolf Summit, Harrison County, West Virginia on July 11, 1947 and Charles who died in Littleton on November 16, 1949. Arliff was buried at Anderson-Bethel Cemetery in Littleton with their parents and Charles was buried at Thomas Chapel Cemetery in Wetzel County. I have yet to find Willie in the 1940 census record.

Willie died of a heart attack at the age of 70 in Littleton on March 28, 1960. He was buried at Anderson Bethel Cemetery in Littleton. He never married. 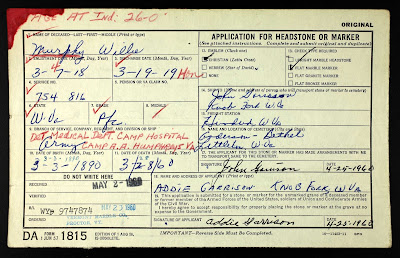