The secret is out and just who was Vernell

Every family has its secrets. It’s just human nature. My husband was in his 40s before he learned a secret his parents kept from their children for many years.

My in-laws lived an hour’s drive from us so when we visited, we’d let them know what time we planned to arrive. They would watch for us and greet us at the door. But the day we discovered their secret was different—only my father-in-law Earl greeted us that day. He let us in the house and pointed us toward their bedroom where my mother-in-law Mary sat on the bed. This was unusual because normally their bedroom was off limits for anyone but them. She called us in and patted the bed telling me to have a seat. There were papers scattered on the bed and as I sat down, one of them caught my attention—a marriage license—their marriage license. I asked if I could look at it and she said it was okay. And that’s when we learned their secret. As I read the license, we learned that in 1951, my then 22-year-old father-in-law, who resided in Herndon, Virginia and worked as a pressure operator, was a DIVORCED man when their marriage license was issued in Montgomery County, Maryland. Wow, that was unexpected!


I feel certain it was no accident that she had their marriage license on the bed when we arrived. One or both wanted us to know about this. They both knew I did genealogy as they had helped me with their families. I don’t know whose idea it was to share this that day, but they were both in the room at the time. Mary on the bed beside me and Earl standing quietly by the door watching the exchange. I looked at both and questioned what I was reading, wanting to be certain what I read was correct. Earl confirmed that it was true and then in his stern way, told us that we were not to talk about this to anyone until after they were both gone. So, we didn’t!

Just this month we learned that my brother-in-law has known about the divorce for 38 years and never mentioned it to my husband or their sister. He was still living at home and discovered the marriage license while looking through a cabinet. He probably wasn’t supposed to be looking through the cabinet so kept that piece of information to himself! My husband mentioned it to him when we learned about it and found out he already knew. My sister-in-law learned about it a little after we did. But we still didn’t talk about it. Just this past January, my husband’s cousin asked if he knew about “the divorce,” which means other family members knew about it but didn’t talk about it with us. I wonder who else knew. 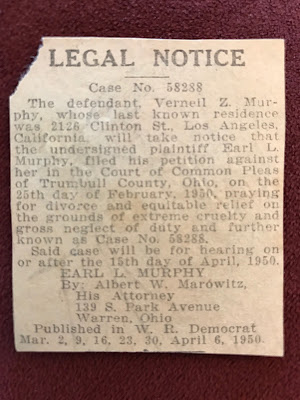 We know her name was Vernell Z and that at some point she lived in Los Angeles, California because it’s listed on a news clipping we found after Mary passed away. The clipping was a legal notice published in the Western Reserve Democrat in Warren, Ohio in 1950. I’ve researched Vernell on Ancestry.com but so far have been unsuccessful in finding anything. Here’s what the news clipping tells us:


Legal Notice
Case No. 58288
The defendant, Vernell Z. Murphy, whose last known residence was 2126 Clinton St., Los Angeles, California, will take notice that the undersigned plaintiff Earl L. Murphy, filed his petition against her in the Court of Common Pleas of Trumball County, Ohio, on the 25th day of February, 1950, praying for divorce and equitable relief on the grounds of extreme cruelty and gross neglect of duty and further known as Case No. 58288.
Said case will be for hearing on or after the 15th day of April, 1950.

As you can see, the legal notice contained another surprise—the grounds being extreme cruelty. With that being the case, I was happy to see it was my father-in-law filing for the divorce and not Vernell.

The only other clue I found is a small leather address book that belonged to Earl with an anchor and USN imprinted on the cover. Inside, I found an entry for Miss Vernell Tarkington. Above her name is Mrs. Alice Tarkington of Los Angeles, California. I don’t know if this is her but Vernell is an unusual name and assuming she was related to Alice, she might have lived in Los Angeles which was the last known address for Vernell Z. Murphy. But I can’t prove that’s her.


We have Earl’s photo album that contains pictures taken in Hawaii while serving in the U.S. Navy. Many of the pictures have been removed. Before he passed away, Earl told us they were “her” and that Mary removed them. Guess you can’t blame her.

They’re both gone now so I decided to write this blog post to share what we know with our children. All three of Earl and Mary’s children gave their permission to publish this. And as mentioned earlier, both Earl and Mary told us not to talk about the marriage until after they had passed away. So now it’s all out in the open and we can freely talk about it if we want to … or not. By the way, they were married for 55 years.