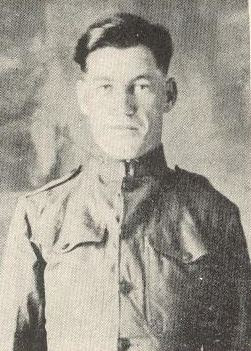 On June 4, 1900, Ollie, his parents, and two-year-old sister Leila lived in a rental home in the 232nd District of Oglethorpe County, Georgia. The census enumerator recorded his name as Olivon. His parents had been married for five years. His father was a farm laborer and neither of his parents could read or write.

On April 22, 1910, Ollie’s growing family lived in a rented farm on Lexington Road in Woodstock, Oglethorpe County, Georgia. Five more children had joined the family for a total of seven children. Ollie’s 78-year-old widowed grandmother Nancy Lankford was living in the home. With this many people in the home now, his mother, sister Leila, brother Waver, and Ollie himself were all having to work on the home farm so were enumerated with the occupation of laborer on a home farm. Although Ollie, Leila, Waver, and Frank were attending school, none of them could read or write. His grandmother was the only person in the home able to read.

About April 1911, Ollie’s mother gave birth to a baby boy. According to Ollie’s sister Nettie, the baby never cried so their parents did not name the baby, probably expecting it to die. He lived three months and four days. On July 14, 1911, the Oglethorpe Echo ran the following news item:


The grim reaper visited the Salem neighborhood twice toward the close of last week and left sorrowing friends and grief-stricken relatives. Taken were infants, one a child of Mr. and Mrs. Jim Adkins and the other of Mr. and Mrs. William Brooks.

World War I broke out when Ollie was 17 years old (July 28, 1914). For the first two years, the United States stayed out of the war. On January 5, 1917, Ollie registered for the World War I draft in Oglethorpe County. At the time, he lived in Rayle, Wilkes County, Georgia, was single, and a self-employed farmer on land owned by Frate Sim in Stephens, Oglethorpe County, Georgia. Ollie was of medium height and build, had blue eyes, and brown hair.

Despite the efforts of President Woodrow Wilson to stay out of the war, America declared war on Germany on April 6, 1917. On July 23, 1918, Ollie was inducted into the U.S. Army as a private at Lexington, Oglethorpe County, Georgia and sent to Camp Gordon located near Augusta, Richmond County, Georgia. According to GEORGIAINFO, Camp Gordon was “one of 16 temporary training camps, the largest in the southern states and the focus of Atlanta’s wartime patriotic spirit.” He served with the 24th Company, 6th Battalion, 157 Depot Brigade, the 3rd Infantry Regiment, and with Company M, 9th Infantry, Replacement and Training Battalion (I hope I got those right!) before being sent overseas to France, travelling aboard the RMS Olympic from Hoboken, New Jersey on September 9, 1918. I was surprised to discover that Ollie was joined on the trip by my great-uncle Luther T. Burnett. Unfortunately, I have no way of knowing if they were aware of the family connection. Ollie and Luther were connected by marriage—they had no common relative.

Many soldiers became sick with influenza and pneumonia during World War I, with Ollie being one of them. He contracted pneumonia while on the RMS Olympic and was taken to the military hospital upon arrival in Portsmouth, Hampshire, England where he died on September 30, 1918. The U.S. Army notified his father William H. Brooks, who also lived in Rayle. Ollie was buried in grave YIII at Magdalen Hill Cemetery in Hampshire on October 2 with a burial service performed by B. G. McGuigan. The war ended just over a month later, on November 11, 1918.

On April 16, 1920, Ollie’s body was exhumed by H.O. order. His body was later placed on board the ship U.S.A.T. Princess Matoika which departed from Southampton, England on May 11, 1920. According to Wikipedia the Matoika also carried “the bodies of 10 female nurses and over 400 soldiers who died while on duty in France during the war.” The ship arrived in Hoboken, New Jersey on May 23, 1920. I haven’t found a record that shows how Ollie’s body was transported back to Georgia but I assume it was by train.


Ollie’s body was reinterred at Salem Baptist Church Cemetery in Lexington on June 27, 1920. The Oglethorpe Echo ran a news article on July 2:


The remains of Ollie Brooks arrived home from across the sea and was buried at Salem Church last Sunday. Funeral services were conducted by Rev Coile. 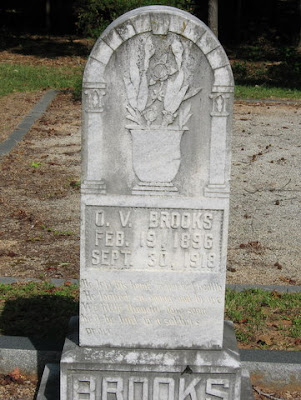 Regarding Ollie’s birthdate, when filling out his World War I draft registration card, Ollie listed his date of birth as January 19th, 1895. However, both his tombstone and the November 28, 1919 Oglethorpe Echo news article record the date as February 19, 1896. I have not yet found a birth record.