I’ve already posted my weekly blog entry but here I am posting another one. This one couldn’t wait until next week—I had exciting news to share! We’ve all seen the commercial about Kyle, the man who traded his lederhosen in for a kilt, right? Well, here’s my testimonial after taking my AncestryDNA test.

Earlier this year, my cousin took an AncestryDNA test. After her results came in, she shared her ethnicity on Facebook. Two months ago, her brother and sister-in-law visited and she and her sister-in-law spent time looking at the DNA matches she shared with other people. That was when they discovered a proof positive DNA match to the line that has been my family mystery and cause of a brick wall—Janes. If you’ve followed my blog, you’ve read the story Daddy has told me many times over the years about the birth of my grandpa, Carroll Harvey Lankford Sr. Just in case, I’ll tell it again.

Daddy was probably in the 7th grade when two teachers named Annie Mae Durham and Leana Mae Moody of Woodville, Greene County, Georgia, pulled him and his sister aside at school. The teachers told Daddy and my aunt the story that their grandmother, Alice Beman Lankford, had allegedly been raped by Thomas P. Janes Jr., the son of Thomas P. Janes Sr., a wealthy plantation owner in Greene County and Georgia’s first Commissioner of Agriculture. A pregnancy resulted and my grandpa was born in 1887. After the alleged rape, Thomas Jr.’s family allegedly disowned him and he was run out of town. They were told that Thomas Jr. was not charged with anything due to the wealth and prominence of his family. None of this could be proven though … until now.

I’ve been interested in having my DNA tested for a while but hadn’t. I felt it was another place for people to get your personal information so held back. But the match found from my cousin’s AncestryDNA test peaked my curiosity. I had to see for myself so I submitted my test in June. The results came in yesterday and didn’t disappoint. I got a “Shared Ancestor Hint” for a match to a couple in the Janes family who we share as common ancestors—my 4th great-grandfather William Janes and his wife Selah Gresham, my 4th great-grandmother. William and Selah Janes had a son named Absalom Madison Janes and a daughter named Mary Ann Frances Janes. My line travels through Absalom’s branch of the tree while the match connects through Mary Ann’s branch. Absalom had a son named Thomas P. Janes (Georgia’s first Commissioner of Agriculture), who had a son named Thomas P. Janes Jr., and the rest is history.


Absalom Janes moved his family to Penfield, Greene County, Georgia in 1839 where they settled in and became prominent members of the community. Thomas eventually sought higher education and once that was completed, made his home in Penfield as well which is where my 2nd great-grandfather James C. Lankford lived in 1872 when his daughter Alice Beman Lankford was born. I confirmed Thomas Janes Sr. knew James C. Lankford when I found an article in the Atlanta Constitution via the Oglethorpe Echo dated May 12, 1883 that stated “A few weeks ago while Mr. J. C. Lankford was plowing along down on Dr. Janes’s home place he plowed up the frame of some person who had been buried there in the past. It was lying due east and west and was in its natural form. The contents were gathered up and carried to Dr. Janes for examination and he pronounced it to be an Indian child between 8 and 12 years old.” That was significant to me because it meant they were in close enough proximity for Thomas Jr. and Alice to know each other.

Rape is horrible and I obviously have no way of knowing if that part of the story is true but I definitely feel that something happened and now I have DNA evidence that links my Lankford line to the Janes line. So, we’ll leave it at that.

My grandpa never thought he was as good as other people and never got over the fact that he was illegitimate. He lived with that shame his entire life. His own family didn’t help. The paper trail of information that would have been provided by family members proves that. Each piece of information (see table below) tells a different story, and for the most part, were not true or were incomplete. 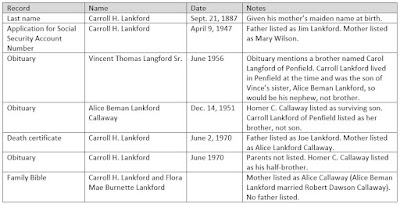 I feel sad that grandpa had to live his life under these circumstances. I also have mixed feelings about what might have happened to my great-grandmother Alice. On one hand, she had to live with whatever it was that happened and my grandpa was forced to live a lie. On the other hand, my Lankford family wouldn’t exist if some part of this story weren’t true because my grandpa would never have been born which means none of us would have either!

So, it appears that Daddy was right. I can’t because he’s over 600 miles away from me, but I want to give my Daddy a hug right now and tell him about the DNA evidence face-to-face. There might just be some truth to the story his teachers told him all those years ago.

P.S., for several years, I’ve been gathering information on Thomas P. Janes Sr. on the chance that I was ever able to prove the connection. He left his mark in Georgia history and it’s been interesting to study him. I’ll share his story in a blog post soon.