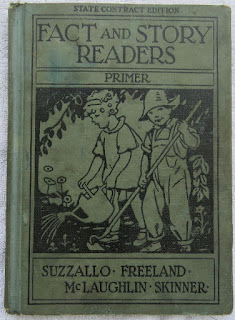 The 52 Ancestors theme this week is “back to school.”

The earliest books I remember reading from are the “Dick and Jane” series, popular books “used to teach children to read from the 1930s through to the 1990s in the United States” according to Wikipedia. In the late 1930s, children in Woodville, Greene County, Georgia were learning to read from the “Fact and Story Readers: Primer” by Henry Suzzallo, George E. Freeland, Katherine L. McLaughlin, and Ada M. Skinner. This book told stories about Bob and his big dog Tag, and Betty and her little kitten Tibby. The Primer was apparently the second book in a series of 10. The original copyright for the book was 1930; however, in 1932, there was a second copyright for the “State Contract Edition,” which is the version I have a copy of. My copy is in good condition for its age. It has a hardback cover with some fraying around the edges. Almost every page contains cute illustrations of Bob, Tag, Betty, Tibby, their family, friends, and other animals. The inside pages have minor tears here and there. All pages are browned and slightly stained from age and perhaps water. The cool thing about this book is that is was assigned to Clark Lankford, my uncle. Clark was born in 1932 so fast-forward a few years and the timeframe for his learning to read would be about right. 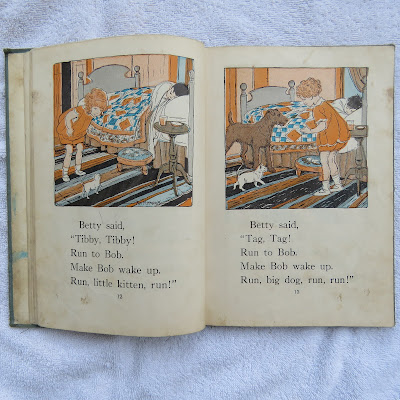 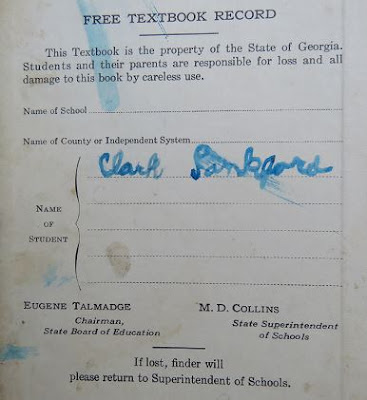 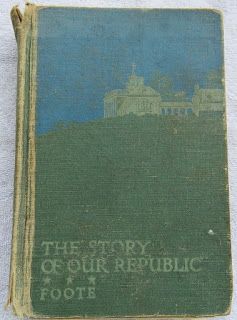 A second book on my bookcase is “The Story of Our Republic: A History for Beginners” by Irving P. Foote, Ph.D. This book taught the children in Woodville about American history. The original copyright is 1932 by the World Book Company. It was illustrated by Leon D’Emo, E. D. Weldon, and Others (yes, it says Others) and has lots of elaborate illustrations and map drawings.


The book had been assigned to four students—Craddock Durham, Annette Huff, my daddy Sam T. Lankford, and my aunt Lucile Lankford. Daddy’s family lived in Woodville in 1940 according to census records so that places them in the correct location. Daddy and Aunt Lucile would have been teenagers. 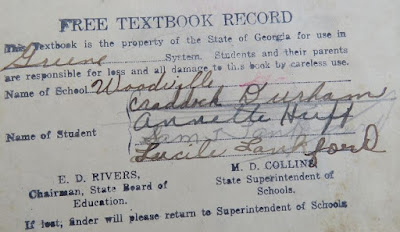 One of the four students, or perhaps several of them, must have been bored with American history and often doodled and drew in the book. I’ve detailed the doodles below. The first one made me laugh out loud!

Page 3: Someone wrote “Look on Page 152.” When I turned to page 152, they had written “You’re a fool for looking.” Glasses had also been drawn on King George III’s face.


Pages 16–17: This is a review page for students and it looks like someone wrote the answers on both pages.


Page 183: Glasses were drawn on Lafayette's face and a spider on his forehead.


Page 246: Glasses and a mustache were drawn on Andrew Jackson’s face.


Page 258: Glasses and a mustache were drawn on John C. Calhoun’s face.


Page 314: Glasses and a mustache were drawn on Henry Clay’s face.


Page 324: Glasses were drawn on Jefferson Davis’ face, but not up to the usual standards. They didn’t color them in like they had on the other faces.


There are lots of check marks throughout the book and other markings on faces but the ones above are the most notable. The book has a hardback cover with lots of fraying. The spine is in poor shape. All pages are browned and slightly stained from age and perhaps water, the same as the Primer above.

My Aunt Lucile Lankford Epps purchased both books at a book sale somewhere in Greene County many years ago and gave them to my Daddy, who in turn gave them to me.


The inside cover has a sticker on it that clearly reads, “DO NOT DEFACE.” I wonder who the guilty party was and if they ever thought that someone would be looking at their doodles in 2018. I told my youngest son about some of the doodles and his response was “good to know things haven’t changed.” 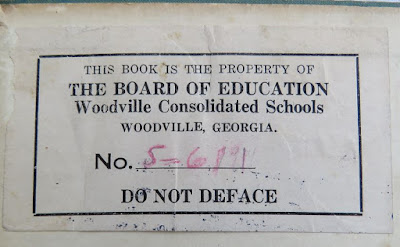 I've had these two books for several years and never looked inside other than to look at the student names. If not for the 52 Ancestors "back to school" theme, I would have missed out on all the fun!