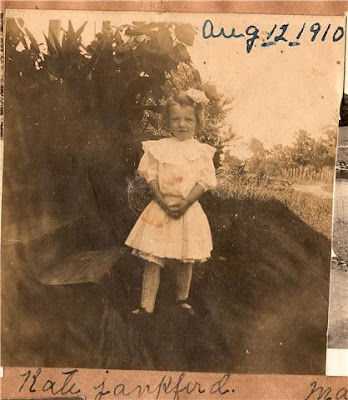 The 52 Ancestors theme this week is “cause of death.” I’ve blogged about young Katie Lankford in the past, but only snippets of her life. This time, I’ll share everything I know about her. As it turns out, Katie’s cause of death was an unusual one, at least it was to me.

On April 22, 1910, Katie and her family lived in the Schull Shoals District of Greene County, Georgia. Her parents had been married for 20 years. Katie’s mother was enumerated as the mother of 11 children, 7 of which were living, so the family had already seen a lot of heartache. One of those children would have been Katie’s brother Julius. He wasn’t listed in the 1900 or 1910 census records so must have been born and died sometime during that decade. There is no date on his stone in Penfield Cemetery in Penfield, Greene County, Georgia. In addition to family members, the census enumerator recorded a boarder living in the home—a 43-year-old man named W. B. Boswell. Both Katie’s father and Mr. Boswell were farmers on a general farm. It appears that some time after the 1910 census was taken, Katie and her family moved to Athens, Clarke County, Georgia.

On December 19, 1914, seven-year-old Katie wrote a letter to Santa that was published in the Athens Daily Herald. In her letter, Katie asked Santa to bring her a doll and doll carriage. She told Santa about her brother Cleveland who had been sick with typhoid fever for seven months. Katie wanted to make sure Santa didn’t forget her and her siblings that year.


In 1915, Katie, her brother Cleveland, and sister Clyde all three became members of the Sandman Club. According to a news article published by the Athens Daily Herald on April 29, 1915, the club was formed to “organize for the boys and girls who read the Sandman stories” published in the Herald. The Herald noted “It’s a club that does things, and when once it gets started, it bids fair to rival some of the adventures of the Sandman stories themselves.” Children that joined the club received a button of membership. Charter members received the button for free. Once the list was closed, the buttons cost ten cents. Each week, these movie parties featured Charlie Chaplin and other Keystone comedy movies free to the children of Athens. During the summer months, the movie parties took place on Saturday afternoons. Once school started, they moved to Monday’s after school. The first Sandman Club event was held at the Lyric Theater on College Avenue the afternoon of June 5, 1915. The Sandman parties ran until March 1916 when the club was discontinued.

But the year 1915 was not all about fun—dark days were ahead. Before summer came to an end, Katie’s 16-year-old brother John died at their Hiawassee Avenue home in Athens on August 17. According to his sister Lila, John died of heart disease. He was buried at Penfield Cemetery the next day. The unthinkable happened a month later when Katie’s mother Ada died on September 13 at their Hiawassee Avenue home. Ada was only 37 years old and left seven children behind. She was also laid to rest at Penfield Cemetery. Sometime after the death of her mother and before Christmas, the family moved to a new home on Satulah Avenue in Athens. Was this because it was too hard to live in a home that a brother and mother had both just passed away in? Surely an air of sadness hung over the home that Christmas. The older children were now forced to help their father take care of the younger children. According to a Santa letter written by Katie’s sister Clyde on December 24 and published in the Athens Daily Herald, their father had to hire someone to take care of the children while he worked. Christmas would have been a meager one that year. Between probable doctor bills, funeral expenses, and the hired help, I would guess there was not much left to buy presents for the children.

On January 5, 1920, Katie and her family lived on Bryant Street in the 216th District of Athens, Clarke County, Georgia. Her father was a laborer in a cotton mill. Her older sisters Mozelle and Clyde were also working in the cotton mill, as winders. Her oldest sister, Florrie, had married Henry Cody, and together with their sons Belmond and Ralph, were also living in the home. Henry worked as a weaver in the cotton mill. The Brewer family lived next door. Katie’s sister Clyde would eventually marry their son Fred.

Katie attended Nantahala Night School in 1921, a year in which baseball was getting a lot of attention at the school. That year, the boy’s baseball team gained a “big brother” who coached and managed the team—a local Rotarian by the name of H. A. Pendergraph. In addition to Mr. Pendergraph, the baseball field was brought up to “first-class condition for games.” I know from experience what a difference the facility can make to a team so that in itself was big. Like many 14-year-old girls, Katie supported her school by attending the boy’s baseball games to cheer on their team. But Katie and some of her school mates wanted more. They wanted a team of their own, so according to the Athens Banner on May 18, 1921, chose “two practice teams under the captions of Reds and Blues, with the following line-ups: Reds.—Jessie Pledger (captain), p; Cleo Stephens, 1b; Lillie Brooks, c; Thelma Pledger, cf; Eunice Epps, 2b; Darline Pierce, 3b; Corinne Stephens, ss. Blues.—Mary Summers (captain), 1b; Inez Jackson, 2b; Floy Nunnally, p; Kate Langford, c; Lottie Waters, 3b; Ruby Summers, cf; Ola Epps, ss. Coach, Clemon Kirk.” On August 26, 1921, Katie and her sister Clyde attended a picnic supper with members of the Nantahala Night School baseball team and Athletic Association held at Barnett Shoals in Athens as reported by the Banner-Herald on August 28, 1921.

At the age of 16, Katie contracted maniacal chorea and died in an Athens hospital on April 19, 1922. She had been attended by her doctor for a month before her death. I had never heard of maniacal chorea (aka chorea insaniens), so of course I had to Google it. After going through many web pages, the best description was found in the English Glossary of Causes of Death and other Archaic Medical Terms. Maniacal chorea is “a grave form of chorea usually seen in women, and associated with mania, and usually ending fatally.” The glossary described chorea as “St. Vitus’s dance; a disease attended with convulsive twitching and other involuntary movements of the muscles or limbs. [Webster1913]. Any of various disorders of the nervous system marked by involuntary, jerky movements, especially of the arms, legs, and face, and by incoordination. [Heritage].” How scary and sad that must have been for the Lankford family. Katie lived at 188 Park Avenue at the time of her death. Her obituary noted that she was 14 years old vs. 16 recorded on her death certificate. Her death certificate also listed her occupation as “domestic” so it’s possible she was working outside the home helping to support the family. She was a member of the West End Baptist Church in Athens. Her funeral was held at Penfield Baptist Church at 4 PM on April 20 followed by burial at Penfield Cemetery. Dunaway and Sons Funeral Home were in charge of the arrangements.