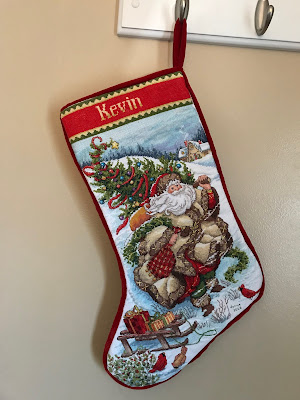 The 52 Ancestors theme this week is “random fact.”

My random fact … you CAN right a wrong. Even if it takes years.

OK, I’m stretching the theme to fit my needs this week, but I’m doing this post tonight come hell or high water!

On the Saturday after Thanksgiving every year, we pull the Christmas decorations out. And on that day every year, I’m reminded that I had something I needed to take care of. But the years came and went, and nothing happened. We decorate the house and one of the last things to go up is the Christmas stockings. If you follow my blog, you’ve read the story about my oldest son’s stocking. If you haven’t, you can read about it here. The bottom line is I made a cross-stitched stocking for my first child but never made one for my second. And so, the past few years, Chris has had fun reminding Kevin that he has a handmade stocking and Kevin doesn’t. Chris likes to say, “I’m Mom’s favorite … look what I have, and you don’t.” It’s all in fun but last Christmas, when I heard Chris say, “Hey Kevin” and then repeat his mantra about his stocking, it felt like someone stuck a knife in my chest, and then twisted it. I’m sure other Moms can relate. I felt a tremendous amount of guilt last Christmas. That guilt nagged at me for another week or two until I finally decided I had to right a wrong and at that moment, decided to make a stocking for Kevin. Knowing it would be a huge undertaking, I thought about it for a week. I didn’t want to start something I might not finish. But the nagging feeling stuck with me, so I finally decided to take the plunge, went online and picked out a kit, and then placed my order. I hadn’t done cross-stitch in 25 years, so my next step was to go to YouTube and find a few “how to” videos to refresh my memory on how to cross-stitch.

Afraid I wouldn’t finish, I decided to keep my project a secret. That way, if I didn’t finish the project, they wouldn’t know, and couldn’t harass me about it. I told my husband Charlie and asked him to keep the secret. My goal was to finish the stocking by November, in time to give to Kevin for his birthday.

The kit arrived mid-January and I got to work. Every night after dinner, I’d lock myself in the bedroom and work a couple of hours. After a few days of this, the kids took notice and started asking what I was doing. They kept asking. I told them I was working on a secret project but that didn’t satisfy them. Finally, one day, Kevin asked me again, and with a straight face, I looked him in the eye and told him I was watching porn. You should have seen the look on his face! It was priceless. He looked at me, and said “well alright then,” then turned around and left the room. He didn’t ask me again! Later, it became a joke—Mom’s working on her secret project—and they left me alone.


I started the project mid-January and typically spent two to three hours on it every Sunday morning and evening. During the week, I worked at least two hours Monday through Thursday evening. I took Friday off to work on my Living in the Past blog and then finished up the week working two to three hours on Saturday morning and evening. I also spent at least three full days working on it as well. Charlie and I estimated that I spent at least 400 hours on my secret project.

The pattern was hard to read for my old eyes, so I had to enlarge it to three sheets of 11” x 17” paper. I made a second copy for outlining. I also made a few notes on the pattern, including a reminder to add Kevin’s name across the top. My worst nightmare was finishing the red bar across the top and then realizing I’d forgotten to add his name! 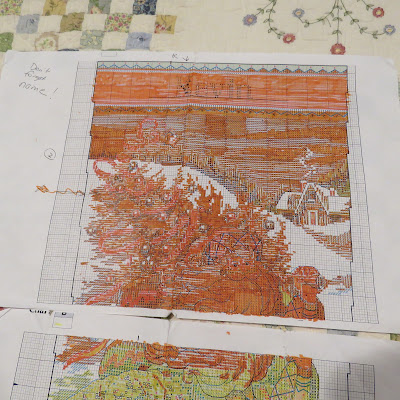 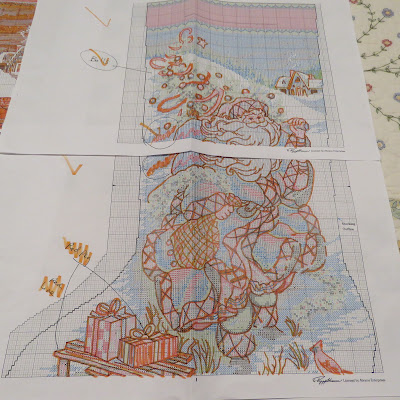 My eyes were strained, arthritis started creeping into my left index finger and thumb, and the tips of those same two fingers became sore, but I was determined to keep working. I made it through the winter months. Winter turned into spring and I still spent my evenings locked in the bedroom. I even took the stocking on my spring trip to Georgia and got some work in. As spring turned into summer, it was no longer a question of whether I’d finish the stocking. At that point, I knew I would. Now it was a question of when. I couldn’t let up because I knew I needed to allow time to have someone complete the project. All along the way, I worried about how I was going to get the finished product sewn into a stocking since I don’t sew. A friend gave me a couple of ideas but then one day my daughter-in-law mentioned a local alteration shop she used, and my ears perked up. I goggled the shop and determined it was a viable option. Feeling better after that, I worked harder. I finally made the last cross stitch on August 15. That night, I washed the finished product after everyone had gone to bed, and then took it the next day to Tang’s Alterations in Manassas. A week later, I was able to declare my secret project as DONE! I can’t tell you the relief I felt at that point. But unfortunately, I had to keep the stocking hidden and my secret quiet for three months. No victory dance for me until last weekend.

The stocking is beautiful and is the newest Murphy family heirloom. I hope the wait for worth it for Kevin.

P.S., what do you think Chris’ reaction was? Well of course … mine is bigger! Ha Ha

P.P.S., my daughter-in-law told me the three of them thought I was building a condominium for my Elf on the Shelf Athya. She said they talked about taking bets.
Posted by Denise at 7:18 PM