The 52 Ancestors theme this week is “surprise.” At first, I had nothing, but then on January 26, my husband decided to go through one last box of papers that belonged to his father, Earl Murphy, and he found a couple of surprises.

The first surprise was a copy of Earl’s Navy identification card. We have many photos of Earl as a young man but had never seen this card, so it was a new photo. That’s always exciting. My son had a lot of fun with it too. When I sent him a copy of the photo, I didn’t show the right side of the card with the Navy information, only the photo itself. Of course, the photo has the height markings in the background, so my son’s first comment was “Lol looks like a prison photo. He ever get sent to the brigg?” Luckily, we know that’s not the case, at least as far as this photo is concerned.

The second surprise included several newspaper clippings related to explosions on two ships and Eniwetok atomic bomb testing. None of this was familiar to my husband or I, but one thing caught our attention—one of the articles report that after the explosion, the USS Comstock helped rescue survivors. We knew the Comstock. According to Earl’s Naval Service Record, he served on the Comstock from November 5, 1947 to April 12, 1948 and often spoke about it. So, what was the significance of these articles?

The day after finding the clippings, Jeanne Bryan Insalaco wrote about her father and the 1946 atomic bomb tests he observed in Hawaii on her Everyone Has a Story blog for her Week 4 (I’d Like to Meet) 52 Ancestors entry. That caught my attention since I’d just read the Eniwetok news clippings and knew Earl was in Hawaii during that timeframe. I mentioned it to Jeanne on Facebook and she posted several links to stories related to the atomic bomb tests. All very interesting and news to us. We began to wonder if Earl too had observed the atomic bomb tests. It was time to read the news clippings again.

One clipping tells about the Comstock rescuing the crew from the net tender Elder. It reads [newspaper and date unknown]: 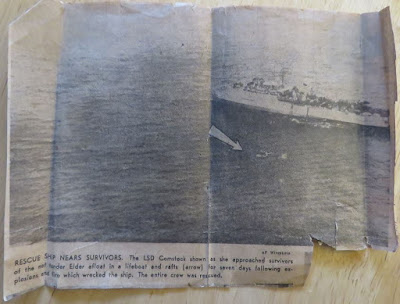 RESCUE SHIP NEARS SURVIVORS. The LSD Comstock shown as she approached survivors of the net tender Elder afloat in a lifeboat and rafts (arrow) for seven days following explosions and fire which wrecked the ship. The entire crew was rescued.

Wikipedia tells us that the incident took place on March 11, 1950 which means Earl was no longer on the ship, having served in the U.S. Navy from February 6, 1946 to February 5, 1949. He probably saved this article since it mentioned the Comstock.

Another clipping talks about atomic bomb test number 6. A third clipping tells of Rear Adm. William Parsons arriving to join the A-Bomb staff. Copies of both clippings are below, newspaper and dates unknown. 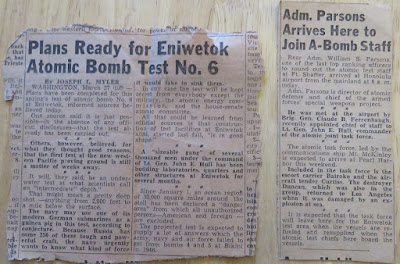 Neither clipping provides any information to help us understand why Earl kept them and what, if any, significance they had to him. Another clipping tells of an explosion on the USS Duncan and mentions atomic tests at Eniwetok. It reads [newspaper and date unknown]: 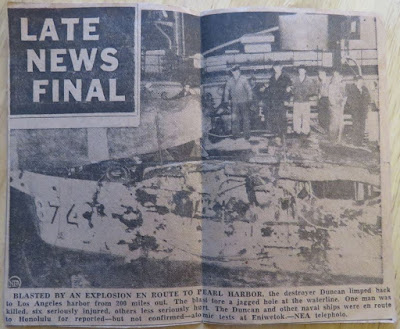 LATE NEWS FINAL
BLASTED BY AN EXPLOSION EN ROUTE TO PEARL HARBOR, the destroyer Duncan limped back to Los Angeles harbor from 200 miles out. The blast tore a jagged hole at the waterline. One man was killed, six seriously injured, others less seriously hurt. The Duncan and other naval ships were en route to Honolulu for reported—but not confirmed—atomic tests at Eniwetok—NEA telephoto.

Another mention of the atomic tests at Eniwetok! So, my next search was to figure out the date of this event. Wikipedia is always there to help and in the Service History section of the page for the USS Duncan (DD-874), it reads:


On 1 March 1948 she suffered 2 killed and 14 injured in an explosion on board. She “suffered considerable damage at the stern and the flooding of the after compartment from a hole at the water line.” After repairs at Long Beach, California, the destroyer rejoined the fleet for training until January 1949, when she again sailed for the western Pacific, this time for eight months.

Now we have a date—March 1, 1948—which means Earl would have still been on the Comstock. The Duncan page contained a link to a page about the USS Comstock. In the section “1945 – 1950,” I found the following text:


After operating along the west coast, Comstock trained in the Hawaiian Islands from July 1947. Between 28 November 1947 and 31 May 1948 she furnished boat pool services to Joint Task Force 7 for Operation Sandstone.

Now, what was Operation Sandstone? Luckily, another link to a page on Wikipedia. This page finally confirms that Earl did in fact observe and take part in the atomic bomb tests. It appears that the Comstock supported Operation Sandstone as part of Task Unit 7.3.2 Main Naval Task Unit and it was on a date when Earl would have been on the Comstock. Wow, this was all a surprise to us! And Earl never mentioned any of this.


Thanks to Jeanne for her timely blog post about her father and his involvement in the atomic bomb tests. If I hadn’t read her post, I probably would have just filed the clippings away and never learned this part of my father-in-law’s military history. 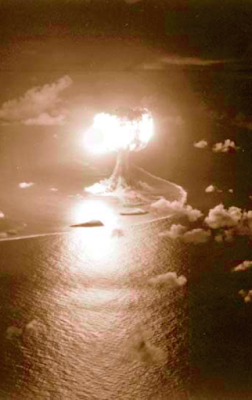