Sending love via a Valentine V-mail

The 52 Ancestors theme this week is “love.”

Last spring, my brother-in-law Randy shared two boxes of correspondence his father Johnnie Marston wrote to his mother Lucile Stacks Marston—340 letters and postcards that began July 1939 and ended October 1945. Johnnie and Lucile were dating when the letters began. He lived in Atlanta, Georgia; she in College Park, Georgia. By today’s standards, that’s a short trip in a car or the transit system. But in the early 1940s when you don’t have a car, nor apparently a telephone, you communicate by writing to each other.


In November 1942, Johnnie joined the U.S. Army to serve during World War II. By December 1942, he shipped to Texas for training at Camp Howze. Johnnie would spend time in Louisiana and New Jersey before being shipped overseas in January 1944, where he served until the war ended.

From the time Johnnie left for Texas until he returned home, he and Lucile spent two Valentine Day’s apart. I’ve transcribed all of the letters and postcards Johnnie wrote to Lucile so have read every one of them. There’s no doubt that he loved Lucile and he didn’t forget her on Valentine’s Day.

Say, you said in one of your letters that we might have a sister-in-law soon. Tell Mickey I said to go right to it, Ha Ha. One thing, if he does get her, I don’t care if she’s an angel, none of them will compare to you, Lou. I mean that more than I have ever meant anything in my life.

Later that day, Johnnie sent Lucile a V-mail letter in which he hoped she “had a grand Valentine Day.” For those of you that have never heard of V-mail, short for Victory Mail, it was a process used by the United States military during World War II to ship huge quantities of mail to and from soldiers overseas. Letters were written on standard sized paper, photographed, and then transferred to microfilm for shipping. Once the microfilm made it to its destination, the letters were printed and cut to a 4 ¼ x 5 ¼ inch piece of paper. This freed up space and weight for other cargo needed for the war. Johnnie sent Lucile quite a few V-mail letters during his time in the Army. Johnnie’s Valentine to Lucile in 1945 was another V-mail, sent from Italy on February 7, 1945. 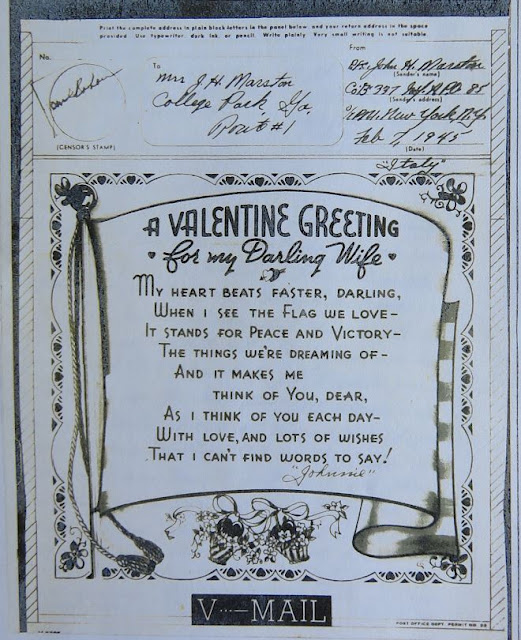 But Valentine’s Day wasn’t the only time Johnnie expressed his love to Lucile—he told her he loved her in every letter he wrote to her. Continue reading for some of the memorable love quotes from Johnnie to Lucile.

December 24, 1942
Darling, I know the 27th of this month is our anniversary and I hate to be apart from you. But that is something we cannot do anything about, as you know. Being as I haven’t got any money, I cannot get you anything to show I really care for what time we have spent so many happy days together. But you know there is no one else that will take your place with me, you know I would give anything in this world to be with you at that certain date, and as soon as I get my basic training, which won’t be long, I will be home for a while. I am sure I will.

January 5, 1943
Can’t you write a letter a little bit longer or are you worried about me so bad that you can’t think of what to write? Darling, don’t worry about me because I will take care of myself. Let me do the worrying for both of us.

February 21, 1943
Honey, the radio is playing now, and the song is “I don’t want to set the world on fire.” That’s me. I just want to keep that flame you got in your heart for me always there. What about it, will it stay there? I hope so.

October 17, 1943
As for me the doctor said there wasn’t anything wrong with me except just love sickness and he wasn’t wrong about that either.

July 26, 1944
Darling, this picture of you I just received, you look so tired and worried and your face looks so thin. Gee Honey, please watch your health and take care of yourself. I wouldn’t know what to do if anything happened to you. You have just got to believe me Lou. God knows how much I love you, and how many times I have told you that. So, Honey please take care of yourself for me. Will you?

October 4, 1944
Gee Honey, all I look forward to now is getting back to you and taking care of you and I pray to God every nite to help me get back to you. You and you alone is what I want to see again. You are all I have and only God knows what would happen to me if anything shall harm you or take you from me.

July 27, 1945
You talk about getting the blues, you shall know how I feel. Robert and Cecil are home and me thinking what a time they are having. Get what I mean? It hasn’t been long since they were home before they come home this time. But me, it has been twenty months or more, going on two years and I been lucky to come through what I have. Sometime, or rather a lot of times, while the war was going on over here, I just give up all hope and would get to thinking that I didn’t care what happened to me. But I would get to thinking about you and knowing that you were waiting for my return. I would do my darn’est to get through whatever mess I was in. It was tough Lou. But you can say and be telling the truth that it was you who pulled me through this war with Germany. Whatever I did, it was for you. Well that’s that and Honey, war is no glory either.

What woman wouldn’t love to hear her husband say those words to her?