William Troy Jones, a veteran of World War I

The 52 Ancestors theme this week is “military.”

On June 21, 1900, Troy lived with his family in the Vinegar Hill District of Walton County. His father was a farmer with sons Henry and James helping on the farm. Troy’s mother had five children, all of which were living.

On April 15, 1910, Troy and his family continued to live in the Vinegar Hill District of Walton County, in the town of Between. Troy’s father, a general farmer, owned the family farm free and clear. Troy, Pearl, and Charles were living at home. Troy’s brother Henry Allen (enumerated as Allen H. Jones) lived next door. At age 18, Troy was working on the home farm, along with his brother Charles. Everyone in the house could read and write. His sister Mary was not living with the family. His parents had been married for 27 years.

Troy served as a private in the U.S. Army during World War I. He registered for the draft on June 5, 1917 at the age of 25. He lived in Monroe and worked for H. A. Jones as a laborer on a farm nearby. Henry Allen Jones was the registrar that day. I assume both were the same person—his brother. Troy was tall and of medium build. He had blue eyes and light hair. Troy was inducted at Monroe on July 16, 1918. His birth year was recorded as 1892 instead of 1891. The Army sent him to Medical Officers’ Training Camp at Camp Greenleaf, Georgia at Fort Oglethorpe, Chickamauga Park, Georgia. It appears that he stayed there until August 1, 1918 and was then sent to Medical Detachment at Camp McClellan near Anniston, Alabama until October 29, 1918. From there he served in the depot brigade until he was discharged on January 3, 1919. Troy, a private, never served overseas.

On January 2, 1920, Troy, now age 28, still lived at home on the Federal Highway in the Lindleys District of Walton County. Troy and Charles were both helping their father with the farm. Sisters Pearl and Mary, were not working so were most likely helping their mother with the household chores. The year 1921 was full of sorrow for the Jones family. Troy’s father died at home of acute indigestion contributed by gall stones on February 9 and his sister Pearl died on August 30 of pellagra and appendicitis at the age of 26. Both were buried at New Hope United Methodist Church Cemetery in Between.

On April 5, 1930, Troy, his widowed mother, brother Charles, and sister Mary lived on State Highway No. 10 in Between. He and his mother were farmers on a general farm, assisted by Charles and Mary. Troy had a sixth-grade education while everyone else made it through the seventh grade.

By April 2, 1940 when the census enumerator came around again, not much had changed—Troy, Charles, and Mary were still living on the farm with their mother. Troy, now 45 years old, was still single, as was Charles and Mary. Troy was the primary worker on the farm having worked 48 weeks prior to the census being taken. His brother Charles had only worked for 20 weeks.

On September 3, 1946, his brother Henry died in Decatur, DeKalb County, Georgia and was buried at Hardeman Primitive Baptist Church Cemetery in Decatur. Troy’s mother died in Loganville, Walton County on July 6, 1948. She was buried at New Hope United Methodist Church Cemetery in Between. Years would pass before the Jones family suffered another death in the family and then they lost three members in three years. The first to pass away was Troy’s brother Charles in Loganville on May 15, 1972. Troy’s sister Mary died in Gwinnett County, Georgia on May 14, 1973. Charles and Mary were both buried at New Hope Methodist Church in Between with their parents. And then Troy himself died in Gwinnett County on January 2, 1974 at the age of 83. His funeral was held two days later on January 4 at New Hope Methodist Church with Revs. Lockridge and Lancaster officiating. Troy was buried in the church cemetery where many other Jones family members rest in eternity. He was survived by his wife Dora (who lived to be 93 years old), his son William, and daughter Barbara. 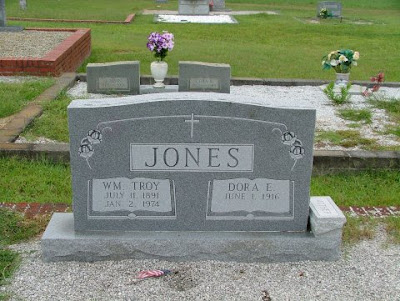 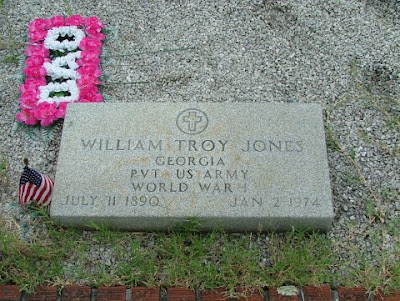