On June 17, 1860, five-year-old Henry lived with his family in Monroe, the Northern Division of Walton County, Georgia. Henry’s father was a farmer with a personal estate valued at $110. They lived next door to his uncle Abraham Benjamin Jones and his family—wife Sarah, daughters Sarah E. and Martha, and son James D. Jones. His paternal grandparents lived two doors away. Before Henry’s sixth birthday, the Civil War began on April 12, 1861. It wasn’t long before his father enlisted as a private in Company C of the Georgia 9th Infantry Regiment on June 13, 1861 and left home for the war. His father took a gunshot in his left shoulder blade during the battle of The Wilderness in Virginia on May 6, 1864. He would muster out at Appomattox Court House in Virginia April 8, 1865. Pension records show that the bullet was never removed, rendering his shoulder and arm useless. I wonder how this affected his work on the farm after he returned home. Did little Henry and his siblings have to help their father with the crops? Henry’s father was barely home from Virginia when his grandfather, Henry P. Jones, died on June 13, 1865. Or perhaps he hadn’t made it home yet. And then a year later, the family suffered another loss when Henry’s grandmother, Sarah Lightfoot Vickers Jones died on June 8, 1866. Both of his grandparents were buried at what would become the Jones Family Cemetery in Between, Walton County, Georgia.

On July 22, 1870, Henry lived with his family in Monroe, the Lindley’s District of Walton County, Georgia. His father was a farmer with an estate valued at $200. At age 14, Henry was working on the farm and was unable to read or write. A 35-year-old female named A. Jones lived alone next door, keeping house. I have yet to figure out who she was but assume she’s a relative with Jones as her last name.

I can’t find Henry in the 1880 census. He wasn’t living with the rest of the family in the Lindley’s district of Walton County. He was still single at this point so could have been living alone somewhere or working and living on someone else’s farm. I would still expect to find him enumerated somewhere but so far, no luck. He apparently stayed in Walton County though because that’s where he married Martha B. McCarty, daughter of Allen McCarty and Elizabeth Janes Camp, on January 7, 1883. Together Henry and Martha had seven children—Henry Allen Jones, James Marshall Jones, William Troy Jones, Pearl Elizabeth Jones, Charles Wesley Jones, Mary Etta Jones, and one unknown child.


On June 21, 1900, Henry and his family lived in the Vinegar Hill District of Walton County which I believe is Between. Henry and Martha had been married for 17 years. Martha was the mother of five children, all of which were living and in the home. Henry was a farmer, able to read and write. His sons Henry Allen Jones and William Troy Jones were farm laborers.

About 1908, Henry and his family attended the Henry Jones family reunion in Walton County. He is number 6 in the family reunion photo taken that day.

As the decade came to a close, Henry lost his father when he died in Walton County on January 7, 1909. They buried him beside his parents in the Jones family cemetery in Between.

The year 1910 started off with sadness when Henry’s mother died in Walton County on January 21. She was buried beside his father in the Jones family cemetery in Between. On April 15, 1910, Henry and his family lived in Between. He and Martha had been married for 27 years. This is the record where I discovered the unknown child. The census enumerator recorded Martha as having had six children, five of which were living. She would have another daughter, Mary Etta, in 1901. Henry was a farmer on a general farm. Three children were living in the home—Troy, Pearl, and Charlie. Son Henry Allen Jones lived next door with his two daughters, Eula and Clara. The census record shows he’s married, but his wife isn’t living in the home. There was a William J. Jones family living next door to Henry Allen Jones. They could be family but I haven’t connected them yet. 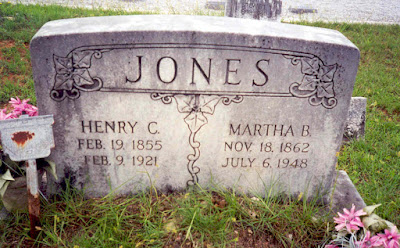 On January 2, 1920, Henry and his family lived on Federal Highway in Between. At the age of 64, Henry owned his own farm. Four adult children were still in the home—Troy, Pearl, Charley, and Mary. Like their father, the boys were enumerated as farmers on a general farm so I assume they were working the family farm. Henry’s son, Henry Allen Jones, lived next door with his family—wife Lena, daughters Clara Belle and Louise, and son Ralph. A year and a month after the census enumerator visited, Henry died at home in Between on February 9, 1921 of acute indigestion, contributed by gall stones. Henry, a member of New Hope Methodist Church in Between, was buried in the church cemetery.
Posted by Denise at 8:56 PM