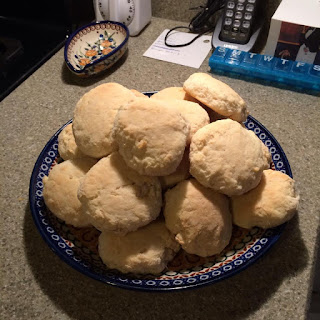 The 52 Ancestors theme this week is “legend.”

I’ve spent a good part of June thinking about what I’d write for this week’s theme. There have been a few stories handed down in our families that I would consider to be legends—ancestors at Appomattox Courthouse at the end of the Civil War; a town named for an ancestor; Indian ancestry; and an alleged rape are a few examples. But I’ve either already written about them or haven’t done enough research to write their story yet. So instead, I decided to write about a “thing” rather than a “person” and tell a few family stories in the process.

Mama’s biscuits are legendary in our family. All I have to do is mention I’m going home to Georgia and someone will say “time for biscuits and gravy.” I look forward to them every time I go home.

Growing up in Atlanta, Mama always cooked a big hearty breakfast for us. Daddy was a plumber and worked out in the elements so Mama made sure she sent him off to work with a full belly. Breakfast usually consisted of eggs, some kind of meat (bacon, ham, streak o’ lean, pork chops, or even brains and eggs), grits, maybe some stewed apples, and of course biscuits and gravy. All good stuff (well maybe not the brains and eggs). She made biscuits for dinner too. We usually had cornbread with dinner but every now and then she’d make a pan of biscuits instead. Sometimes when she had to work the evening shift, she’d make a pan of biscuits before she left for work and leave them for us to bake with dinner. They were basically a staple in our house.

We even got her biscuits on our yearly Daytona Beach, Florida vacations. We stayed at motels that had kitchenettes so we ate breakfast and lunch at the motel and then went out for dinner. Weeks before vacation, Mama started filling a box with grocery staples—mayonnaise, ketchup, peanut butter, etc. Things she could buy at home on sale vs. waiting until we got to the beach and had to pay full price. I think she enjoyed the thrill of the hunt in finding items on sale, anything to help the budget. There was always a sack of self-rising flour and a can of Crisco in the box by the time we left for the beach. The morning we left for Daytona, Mama got up extra early and cooked sausage patties and biscuits. We left home well before daylight so as soon as we got in the car, us kids would go back to sleep. A couple of hours down the road, we’d all wake up. Mama would break out the sack of sausage biscuits and we’d pig out. There was no stopping at McDonald’s or Hardee’s for us in those days. Who would want to when we had Mama’s biscuits?

The motel we stayed at served free donuts made on the premises. We always made our way to the office for some donuts, but still looked forward to biscuits a couple of mornings that week. I remember staying at the Treasure Island Motel. The back side of the room was a small kitchen. If you looked out the window, you saw the parking lot. The rest of the room was a combined bedroom/living room space with two double beds, a sofa bed, probably a roll away bed, and a large picture window facing the ocean. Mama got up early and cooked breakfast while we slept in. When breakfast was ready, she would open the picture window curtains. We were on the second level and the bright Florida sun came shining in—blinding us awake. But once we saw the pan of biscuits, we didn’t care.

Have you ever mixed sorghum syrup and butter together, then spread it over a hot biscuit? You don’t know what you’re missing if you haven’t. I always enjoyed Mama’s homemade pear preserves with a hot biscuit as well. Last fall, my son stopped in South Carolina on his way to Georgia and bought some peach preserves. They were a perfect complement to Mama’s biscuits.

Mama never measures anything. She used to always use the same bowl, one that she’s had for 60+ years, but she’s moved on to other bowls now. After pouring flour in the bowl, she uses her fingers to swirl the flour around until she has a well in the middle of the flour. Then, using her fingers, she scoops Crisco out of the can, drops it in the well, and squishes the Crisco and flour together with one hand. Once the flour and Crisco are mixed, she pours in buttermilk, swirls it around in the flour mixture, and then continues squishing and kneading. This process continues until all the flour and buttermilk have been incorporated and she has the consistency she’s looking for. By now, the flour has formed a ball, which she flips over so she has a smooth surface. Then she pats the ball of flour a couple of times and starts to squeeze out a biscuit with her messy hand and places the biscuit on the greased pan with her clean hand. 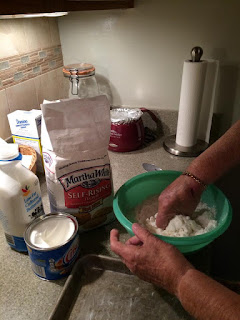 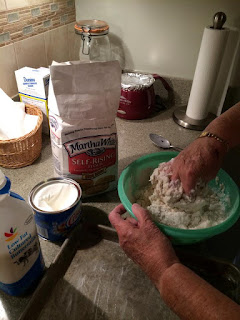 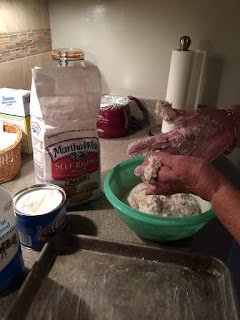 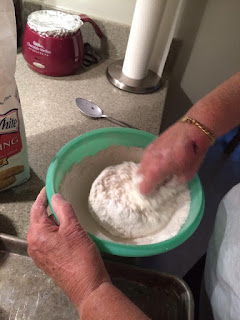 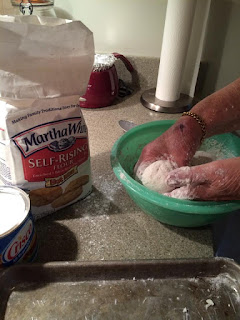 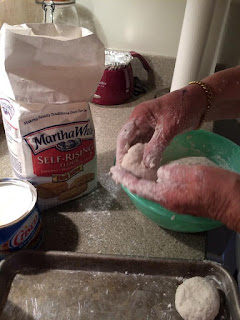 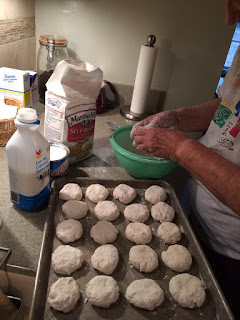 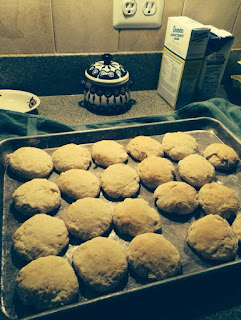 I can’t tell you how many times I sat on the kitchen counter when I was younger watching her make biscuits. And do you know, I still can’t make them myself! I tried making them once for my family. After they told me there were like hockey pucks, I never made them again. I guess I could use my usual excuse for everything—the recipe must be a right-handed recipe and I’m left-handed.

Mama was about 16 or 17 when she learned to make biscuits from her step-brother W. L. Holland’s wife Betty. She learned to squeeze the biscuits by hand vs. rolling them out and using a biscuit cutter from her grandmother Hattie Rhinehart Shields when she and my sister Bonita lived with her for a while. She’s still making her legendary biscuits for us when we go home. She says she out of practice but they still taste delicious to me!
Posted by Denise at 7:19 PM