The 52 Ancestors theme this week is “Dear Diary.”

The closest thing I have to a diary in my genealogy research are actually letters that my brother-in-law Randy Marston generously shared with me last year. His father, Johnnie Marston, served in the U.S. Army during World War II and religiously wrote Randy’s mother, Lucile Stacks Marston, during that time. Johnnie tried to write Lucile every day but training and the war often got in the way. He was still able to write 340 letters and postcards to Lucile beginning in July 1939 and ending in October 1945. Earlier this year, Randy found another group of letters that Johnnie wrote to Lucile’s parents—44 in all. It’s an impressive collection.

D-Day is described by Wikipedia as “The Normandy landings were the landing operations on Tuesday, 6 June 1944 of the Allied invasion of Normandy in Operation Overlord during World War II. Codenamed Operation Neptune and often referred to as D-Day, it was the largest seaborne invasion in history. The operation began the liberation of German-occupied France (and later Europe) from Nazi control, and laid the foundations of the Allied victory on the Western Front.”


Since June 6, 2019 marked the 75th anniversary of D-Day, last week I decided to look through Johnnie’s letters to see if he had written to Lucile on June 6, 1944. I wondered what was on his mind? What was he doing at the time? He didn’t share much about the war in his letters to Lucile—it was mostly about family, daily routine stuff, and his missing her. But every now and then you find a piece of information that reminds you why they weren’t together. Johnnie was stationed in Italy at the time so was not part of the invasion, but you know the events of that day would have affected him. As it turns out, he hadn’t written Lucile that day. He did write her a V-mail letter the day before (June 5) but there were no hints as to what was coming on June 6.

Just a few lines to let you know I am well and OK and hope that this finds you the same. I received a letter from you a couple of days ago. It sure made me feel good to hear from you. I don’t hear from you as often as I need to. I guess they are holding most of the mail up here lately. I am glad to hear you have a little money saved up. You are doing alright Baby. That’s one of the things I like about you. I hope all the folks are well and Grandma is lots better. I wrote her a letter. Well Darling, I will have to close for this time. I miss you a lot and I love you a million.

Johnnie didn’t write a letter on June 7 or 8 either. On June 9, his photo appeared in The Atlanta Constitution, recognizing troops from the Atlanta area who were serving in the Army, Navy, and Marines. But still no letter.

Johnnie finally wrote Lucile on June 10 and there were only two vague sentences that gave a hint of what had been going on with the war.

Just a few lines to let you know I am well and ok and hope that this finds you the same. I received the writing paper and the pen and pencil set from you today. Boy was I glad to get them. I also received a letter from you, Dot, and sister Evelyn. Not bad at all, do you think. Evelyn wrote and said she was expecting again in September. In this letter and the one I received from you was telling me about her also. Gee I sure am sorry to hear about Dot being sick; also, the baby too. I hope they are much better by now. You say Drextel got rejected? The lucky stiff. In a way though, I didn’t think he would go in. Well I guess Cecil is doing his training now. Has Jennie heard from him yet? How is she taking it? Darn I almost forgot to tell you I received a letter from your Mother the other day. I am going to try and write to her as soon as I finish this to you. As you can read by the paper’s lately, I haven’t had time to do much of anything. I hope you see things that way and understand just why I haven’t been writing to you much here lately. Say this pen don’t write bad at all. It just needs broke in a little bit, you know. Just like a lots of other things need to be, Ha Ha. Honey, I am not going to tell you what to do about going down and staying with Evelyn. Just you and her staying together, I don’t like that. If Louise was going to be with you down there, I wouldn’t care but the way they have things planned, that’s no good. You better just wait and let them come up to see you, ok? Well Baby, I will have to close for this time so keep your chin up and keep smiling. Also, tell all the folks hello for me. I miss you a lot Darling and I Love you a Million.

P.S. Are you sure you sent me a watch? I am still looking for it. 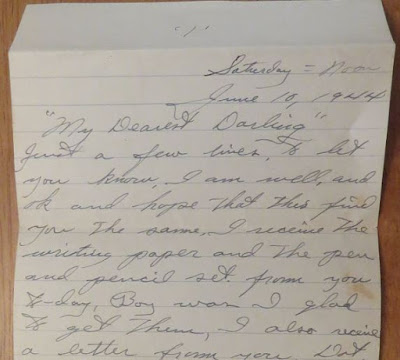 So, no diary, but I feel the letters are just as good as they give a glimpse into Johnnie's life during a critical time in history, often on a daily basis as you would write in a diary.

You can read more of Johnnie's letters here.

Johnnie made it home from the war but many others didn’t. I thank him and those who made the ultimate sacrifice for our country so that we are able to enjoy our freedom.