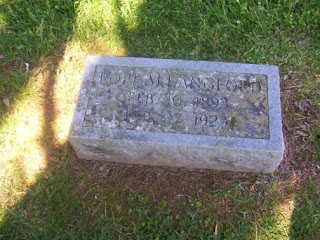 The 52 Ancestors theme this week is “thief.”

This theme has had me stumped the entire month of November. I couldn’t think of anyone to write about so last week I started thinking about synonyms for “thief.” That didn’t help me either. I even asked my husband for suggestions, to which he responded “well, you’re a thief … you stole my heart.” While I appreciated his sentiment, that didn’t help. I finally came back Jessie Pope Mullins Langford, whose tragic story I’ve already told. If you read her story, you know that she suffered from mental illness and took her own life in 1929, leaving five young children behind. Earlier this year, I found another article in The Atlanta Constitution, published on February 20, 1929 about Pope so thought I would add the additional details to her story.

I previously mentioned that Pope’s death certificate noted that she was in a deranged state when she took her life. This new article goes on to describe her as “a possible victim of kleptomania.” The article also noted that Pope “had been arrested five times since 1924 on shop lifting charges. Each time previously she had been able to make bond and was not forced to spend a night at the police station, but Monday, Gresham and V. D. Young, Jr., told her Langford would have to be informed of her actions, they said, when she was arrested in a store with five pairs of stockings in her pockets.” Wikipedia describes kleptomania as someone with “the inability to refrain from the urge for stealing items and is usually done for reasons other than personal use or financial gain.” Wikipedia further notes that “First described in 1816, kleptomania is classified in psychiatry as an impulse control disorder. Some of the main characteristics of the disorder suggest that kleptomania could be an obsessive-compulsive spectrum disorder, but also share similarities with addictive and mood disorders.” Oxford Learner’s Dictionaries describes deranged as being “unable to behave and think normally, especially because of mental illness.” So, all this tells me that Pope was in such a state of illness that she couldn’t control herself, and when confronted with having to tell her husband what she’d done, she couldn’t live with that.


Pope came “from one of the best families in the county, and as a young girl, at Penfield, she was loved and respected by all who knew her” but that didn’t help her when it came to her illness. I wonder what life would have been for her and her young family if she’d been born today instead of in 1929.