On September 6, 1860, Martin and his family lived in Marshall County, Virginia (now West Virginia). His father was a farmer with real estate valued at $375 and a personal estate valued at $150. Martin and his sister Mary were attending school at the time. His sister Margaret at one-year-old was obviously too young to be in school. Martin’s maternal grandparents, John P. and Catherine (Brannon) Daughtery, lived five houses from the Murphy house. On this census record, I learned that John Daughtery was from Ireland. Martin’s sister Nancy was born on January 25, 1867 and was just under two weeks old when their mother died in Marshall County on February 7 at the age of 41 years. Martin’s mother was buried at Greenville Ridge Cemetery in Silver Hill, Marshall County, West Virginia. Martin’s father Samuel was now left to raise five children alone. But that changed on November 27, 1868 when he married Tabitha A. Bonar Clark, daughter of David Bonar and Elizabeth J. Core near Belton, Pennsylvania. Tabitha, a widow, had previously been married to James C. Clark who died in 1865 and had five children of her own—Eliza Jane Clark (20), Emeline Clark (15), Charles W. Clark (12), Ann Rebecca Clark (7), and Artimace M. Clark (4). Tabitha had a sixth child named Sarah E. Clark who died on October 4, 1863 at the age of 2 years in Wetzel County, West Virginia. Samuel and Tabitha were only married a few months when Tabitha’s daughter Emeline died on March 10, 1869.

On July 26, 1870, Martin and his now blended family lived in the Center Township of Wetzel County, West Virginia. His father was a farmer with real estate valued at $500 and a personal estate valued at $200. Martin’s stepmother Tabitha was keeping house and unable to write. At 17 years of age, Martin was attending school but was also unable to write. Only three of Tabitha’s children lived in the home—Charles, Rebecca, and Artimace. They lived next door to the William H. Murphy family and beside him was the James Murphy family. I need to figure out if they’re connected to Samuel and his family.

On June 24, 1880, the Murphy family lived in the Liberty District of Marshall County, West Virginia. Martin’s father was a farm laborer, most likely assisted by 24-year-old Martin who was a farm laborer. His stepmother Tabitha was keeping house, sister Emily was working as a domestic, and brother Elmer was working as a laborer. Martin’s stepbrother Charles was working as a farmer, while stepsisters Rebecca and Artimace (enumerated as Arte) were both “at home.” Martin now had a nephew named James L. Blake, although I haven’t determined which sister or stepsister he belonged to.

Daughter Tabitha was born in 1896. Sadly, she only lived for about two years, dying in 1898. Tabitha was buried at Anderson Bethel Cemetery in Littleton, Wetzel County, West Virginia. I wasn’t aware of this child until we visited the cemetery in 2009 and found her grave, which thankfully was clearly marked by the stone below. 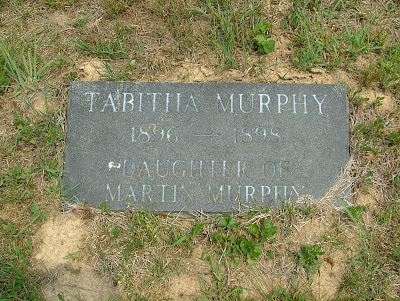 I found a second marker nailed to a tree. 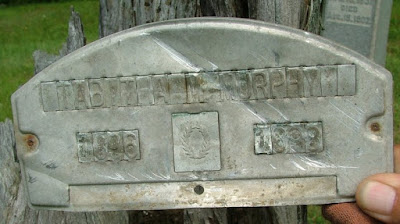 On June 22, 1900, Martin and his family lived in Littleton, within the Clay District of Wetzel County, West Virginia. The 1900 census record shows that Martin and Sarah had been married for 16 years which would have meant they were married about 1884, three years before their first child was born in 1881. Martin supported his family working as a teamster, someone who hauled merchandise using a team of horses. As a teamster, Martin would have “worked 12–18 hours a day, seven days a week for an average wage of $2 per day” according to the Teamster’s webpage. His wife Sarah was enumerated as having had nine children, eight of which were living. That would account for the death of little Tabitha in 1898. Martin, Sarah, Charles, and Essie were all able to read and write, however, sons Edward and William weren’t. Their daughter Cora had already left home, living in the home of James and Ida Johnston, a local merchant. Cora was working as a servant, although it’s not clear if she was working for the Johnston’s or someone else. Daughter Essie married Frank Oscar Grimm in 1907 and by 1908 had started a family of her own.

On April 27, 1910, the Murphy family continued to live in the Clay District of Wetzel County. Martin was now working as a general farmer. The 1910 census record shows that Martin and Sarah had been married for 27 years and that Sarah was the mother of 11 children, 10 of which were living. Eight of the children still lived at home—Edward (26), Charles (21), William (18), Ella (17), Arliff (16), Cecil (11), Addie (8), and Olive (6). Edward, Charles, and William were working as teamsters in an oil field, daughter Ella as a servant for a private family, and son Arliff as a farm laborer. Cecil and Addie were both attending school while six-year-old Olive was not. On May 25, 1915, Martin’s daughter Essie died of septic endometritis in Warwood (a neighborhood of Wheeling), Ohio County, West Virginia. She was just 27 years old and left three young children behind, the youngest being three years old.

On January 13, 1920, Martin and Sarah still lived in the Clay District of Wetzel County, along with three of their adult children—William, Arliff, and Addie. Martin was the only person in the home working—farming on a general farm. Martin’s wife Sarah died of cancer on April 1, 1927 in the Clay District at the age of 67. She was buried at Anderson Bethel Cemetery in Littleton. Just five days later, Martin died on April 6, 1927 in Mannington, Marion County, West Virginia at the age of 74. He was buried beside Sarah at Anderson Bethel Cemetery in Littleton on April 8. Martin’s son Willie was the informant on his death certificate. Dr. F. W. Vance noted that he did not treat Martin and that he evidently died from a cerebral hemorrhage, also known as bleeding of the brain. 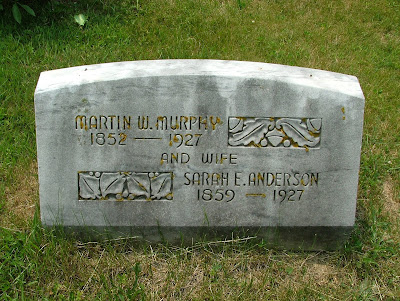 I wanted to write about Martin after finding the above photos of him and his wife Sarah last weekend on the www.familysearch.org website. These photos take us back visually one more generation in my husband’s family, which is very as exciting. Thank you to Cora Childers for posting the photos, as well as for giving me permission to post them here.