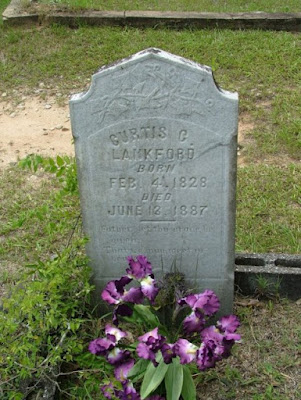 It appears that he sometimes went by the name Kirk or Curt.

A word of caution to other Lankford researchers ... there are several men named Curtis Lankford or Curtis Caldwell Lankford, so when researching, you need to be careful that you have the correct person.

The first record I find for Curtis is a marriage certificate in 1852. I have performed extensive searches of the 1850 census records, including page by page scans of multiple counties, and have been unable to find Curtis. I’ll keep looking.

Curtis married Nancy A. E. McCarty, daughter of John D. McCarty and Rene (or Rena) Harris, in Madison County, Georgia on December 28, 1852. The ceremony was performed by the local Justice of the Peace, Henry Smith. Curtis and Nancy would have a large family of at least 10 children over the course of their marriage—William A. Lankford, Mary A. Lankford, Rebeckah H. Lankford, John R. Lankford, George Washington Lankford, Charles Moore Lankford, Wade Hamilton Lankford, Joseph Jackson Lankford, Nancy Crawford Lankford, and Florence Lee Lankford.


Controversy found its way into Curtis’ life in 1860 when on March 29, the Southern Banner published a story about a cave that Curtis had reportedly found:


A cave was recently discovered on the land of Mr. Kirk Langford, near Penfield, Green county, containing bones of the hyena, rhinoceros, and other animals extinct in this country as well as of animals now existing. This discovery is an interesting one to geologists and Zoologists. – Augusta Dispatch.

Another article appeared in The Daily Sun in Columbus, Georgia on April 4, 1860 although it referenced March 27:


Special Correspondence of the Dispatch. Penfield, Ga., March 27. Editor Dispatch: You have doubtless noticed a communication to the Christian Index, concerning an “extraordinary discovery,” lately made upon the plantation of Mr. Kirke Langford, of Penfield. Particulars have since developed themselves more fully, and might prove interesting to the scientific portion of the readers of the Dispatch. The Index correspondent was generally correct in his statements, all of which it is presumed (as they have been copied extensively out of the State) your readers remember, but since the surrounding rocks have been blasted, the earth carefully dug out—and examined, several other interesting things have been added to the previous discovery, which no doubt will present to the Naturalists and Geologists of the country, a more fruitful theme by hypotheses than any other discovery ever made upon the North American Continent.

On March 30, The Rome Weekly Courier published a story that went into more detail on the cave story:


From the Christian Index. Extraordinary Discovery. Penfield, Ga., March 12, ’60. Dear Bro. Boykin:—It is my pleasure to be able to record one of the most extraordinary discoveries of the age.—A few days ago, while some of Bro. Kirke Langford’s negroes were employed on his plantation near this place, in removing some loose stones preparatory to getting ready to blast some rocks, these loose stones having prevented free access to the main body of the rock, when suddenly the whole mass fell in, and exposed to view a cave about nineteen feet in length, seventeen in breadth, and four or five in depth. Bro. L., on entering, found the roof and sides incrusted with stalactites, and a general sheet of stalagmite rising irregularly into bosses, lay beneath his feet. This sheet of stalagmite broken through, a rich brown mud was found about nine inches in thickness, loamy for the depth of two inches, while the interior was rather sandy. In this loam, at all depths, from the surface down to the rock, in the midst of the stalagmitic upper crust, were found bones of the following animals: carnivora—hyena, bear, fox, and weasel; pachydermata—rhinoceros and horse; ruminantia—ox and stag; rodential—rabbit, water rat, and mouse; and birds—raven, lark and snipe. The bones and teeth of the hyena were plentiful, while the bones of the remainder were comparatively scarce. There were three different species of bear, the largest of which was Cuvier’s “ursus spelacus.”—Bro. L., who is, although a plain, blunt farmer, one of the best versed men in science in the State, explains this natural phenomenon very satisfactorily.—He says that he thinks it a den of some ravenous animal; that carcasses of large animals were drifted into it. I will not enter into the details of the explanation, as Bro. L., intends to write an article himself on this great curiosity, for which this communication is designed simply to prepare the public ear.—Those wonders of nature will, I understand, be presented to the Mercer University museum. Very respectfully, your obt. Serv’t., H.H.T.

That story quickly went sour when on April 3, 1860, the Rome Tri-weekly Courier published the following article:


Kirk Langford is a “Brother” of the drinking persuasion, and about the only cave he has ever explored, has been some well that needed cleaning out.

We have learned, that Prof. Tucker, of Mercer University, is quite outraged, as he well may be, at the audacious use of his initials, by the person who contributed this wonderful information to the Index.

We publish below an account of a diabolical and partially successful attempt of a negro woman to destroy herself and her three children. From the coincidence of the place and name with the cave hoax we are induced to suspect that the Locomotive, from which we learn the facts, may also have been imposed on.

Devilish Act of a Negro Woman. We learned through a gentleman from Penfield, on yesterday, that a negro woman belonging to James Lankford, of that place, becoming tired of life, threw three of her children into a well, said to be 65 feet in depth, and then jumped in herself.

“Curt.” Lankford went down after them, and found her still living and not seriously injured; when he reached her she attempted to drown him, and it was only by main force that he subdued her and brought her up; the children were all dead.

She is confined in mail and will no doubt be hung as a murderess.

She assigned as a reason for the rash and in-human act, that she wished to die, and didn’t want to leave any of her children behind.—Atlanta Locomotive.

I wrote about “Becky” attempting to drown in her children in 2014. You’ll find that story here, although it doesn’t mention Curtis. It seems that brothers Curtis and James both had a drinking problem and apparently liked to tell stories.

On June 2, 1860, Curtis, Nancy, and their children William, Mary, Rebeckah (spelled Rebecca), and John were living in Woodville, Greene County, Georgia. Curtis worked as a laborer and had a personal estate valued at $100. He was unable to read or write. Curtis enlisted as a private in Company C, 3rd Regiment Georgia Infantry “Dawson Grays” in Penfield, Greene County, Georgia on April 24, 1861 by Capt. R. L. McWhorter in General Wright’s Brigade. He claimed residence in Greene County, enlisting for a period of one year. He mustered into service at Augusta, Georgia on May 3, 1861 by Capt. R. G. Cole. Curtis was discharged from Company C on July 1, 1862 as under age. On December 24, 1862, Curtis swore his allegiance to the State of Georgia. He enlisted as a private in Company G, 66th Regiment Georgia Infantry on August 15, 1863, serving with them just under two years. He was paroled in Athens, Georgia on May 8, 1865. Curtis was at home on sick furlough due to inflammatory rheumatism approximately 60 days before the surrender at Appomattox Courthouse in Virginia.


On June 16, 1870, Curtis and his family lived in Penfield, Greene County, Georgia. Curtis was still working as a laborer, Nancy was keeping house, and son John was a farm laborer. Three children had been added to the family—George, Charles, and Hamilton. By 1878, the family had moved and was living in the Simston Militia District of Lexington, Oglethorpe County, Georgia. Unfortunately, property tax records don’t show anything regarding the value of his real or personal estates.

On June 7, 1880, Curtis and his family lived in the Bowling Green District of Oglethorpe County, Georgia. Curtis was now employed as a well digger while his wife Nancy kept house. Their 14-year-old son Charles (enumerated as Charlie) was a farm laborer and 10-year-old Hampton (Hamilton) was attending school. In addition to Curtis being unable to read or write, the census enumerator noted that neither Nancy or Charles could write. Three more children had been added to the family—Joseph, Nancy, and Florence. Property tax records for the period 1878 to 1882 show that Curtis was living in the community of Stephens within the Bowling Green District of Oglethorpe County. Again, the columns noting the value of his real or personal estates was blank. He was listed directly beneath a Charles Lankford, most likely his son, whose also had no real or personal estate listed on the tax record.

Seven years after the 1880 census was taken, Curtis was dead. He died at the age of 59 near Bairdstown in Oglethorpe County on June 13, 1887 “worn out with old age and rheumatism” according to a pension application noted below. He was buried at Bairdstown Cemetery, in Bairdstown, Oglethorpe County, Georgia. His obituary was published in the Oglethorpe Echo on June 17, 1887:


(Bairdstown correspondent) - Mr. Kirk Langford died last Monday night and was buried in the cemetery here on Tuesday. After much suffering and a long spell of sickness he passed quietly away. He has many friends who will regret to hear of his death.


Curtis left no property, real or personal, for his family when he died. Curtis’ wife Nancy filed for and received a widow’s pension in 1901 under the name Susan A. Lankford. The paperwork originally had the name Nancy but that was crossed out and Susan was written in instead. She was living in Lexington, Oglethorpe County, Georgia at the time. When she submitted the application, Nancy stated that she and Curtis were married in 1851, not 1852 as records show. Nancy also stated that Curtis never fully recovered from the rheumatism that caused him to be released from service in 1865 and that Curtis died on June 14, not the 13th. E. R. Cheney, a lifelong friend of the Lankford’s stated that Nancy had nothing at the time of her application. In fact, he stated “She has nothing at all, never did have anything. They have lived under my observation for 50 and 60 years. She had nothing at all.” It was noted in the application that at the time of his death, Curtis was very feeble and suffered from partial blindness. It also started that he had no property. Nancy received a pension through at least 1907.