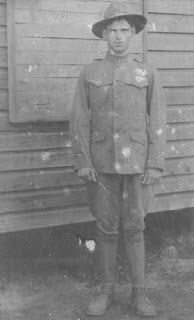 Luther Terrell Burnette, son of Thomas Terrell Burnette and Elizabeth Jones, was born on September 21, 1893 in Walton County, GA. He registered for the World War I draft in Greene County, GA on June 5, 1917 and served as a Private in the U.S. Army. He was single at the time and listed his occupation as farming in Greensboro, GA. His draft registration card shows that he was of medium height/build, had grey eyes, and brown hair. He married Etta Bell Massey circa 1920 and they had two daughters, Hazel and Frances. Luther died on November 17, 1977 in Greensboro and is buried there in Greenview Cemetery.
Posted by Denise at 4:17 PM