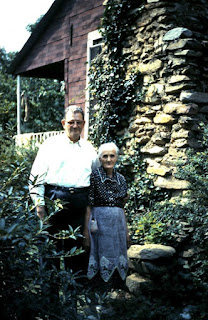 William Hoyt Vest, son of Andrew Jackson Vest Sr. and Bessie Elliott, was born in Catoosa County, Georgia on August 7, 1905 and died in San Diego, California on April 30, 1987. He lived in Tunnel Hill, Georgia for many years but moved to San Diego late in life to live with a son. Hoyt was a diabetic and eventually lost both of his legs due to the disease. The woman in this picture is unknown. I wonder if it's his mother.
Posted by Denise at 5:28 PM