In 1884, Ben’s mother made a baby dress (pictured below) for young Ben. We found the dress in a dirty plastic bag inside a box hidden away in a shed after my mother-in-law died in 2006. Inside the bag was a note handwritten by Ben’s sister, Bertha, stating that it was Ben Smith’s baby dress made by his mother about 1884.

On January 21, 1900, Ben, or Bennie as he was often called, joined the Apollo Presbyterian Church. He was listed as Ben G. Smith in the registry. On June 25, 1900, Ben lived with his family in the Washington Township of Westmoreland County, Pennsylvania. He was a clerk in some sort of depot (I’m unable to read the type of depot in the census record).

On April 26, 1910, 27 year old Ben still lived at home in Paulton, Westmoreland County, Pennsylvania. He was a Doubler in a sheet mill.

Ben’s father died on March 9, 1912 in Westmoreland County, Pennsylvania. He was buried at Riverview Cemetery in Apollo.

On September 12, 1917, Ben registered for the World War I draft. He lived in Apollo and worked as a Catcher for the American Sheet Mill and Tin Plate Company in Vandergrift, Westmoreland County, Pennsylvania. His World War I Draft Registration Card states that he was short and slender and that he had blue eyes and dark hair.

On January 26, 1920, Ben lived with his widowed mother and siblings George, John, and Bertha on Apollo Road in Greensburg, Washington Township, Westmoreland County, Pennsylvania. Ben was a Catcher in a steel mill.

On April 8, 1930, Ben, a laborer in a steel mill, still lived at home with his mother and a four year old nephew, John Athya. Ben and his mother Amanda moved John into their home to help Ben’s sister Bertha out at the birth of her second child. John ended up staying there and was raised by Ben and his mother.

On April 5, 1940, Ben was the head of the household, living with his mother and nephew John in Paulton. He was a helper in a steel mill.

On April 27, 1942, Ben registered for the World War II draft. He lived in Apollo and his telephone number was Vand. 1557-L. Ben listed his mother as the person who would always know his address. He was apparently retired as he listed his employer as “Pensioned.”

Ben’s mother died on January 11, 1943 in Washington Township, Westmoreland County, Pennsylvania. She was buried at Riverview Cemetery in Apollo.

On December 17, 1949, Ben moved to Bedford, Bedford County, Virginia to live in the Elks Retirement Home after he was unable to care for himself. According to a 1949 Elks medical record, he had been employed as a clerical worker at Illinois Steel Corporation; his desired place of burial was Riverview Cemetery in Apollo, Pennsylvania; he had a sister who had epilepsy; he had previously had measles and mumps; he’d broken a finger on his right hand as a child; and had a hemorrhoidectomy in 1946. Ben wore glasses and had had dentures for 10 years. He weighed 100 pounds at the time, but had weighed 120 pounds six years previous. Ben’s hair was black and his eyes blue. He had hardening of the arteries and a hernia. 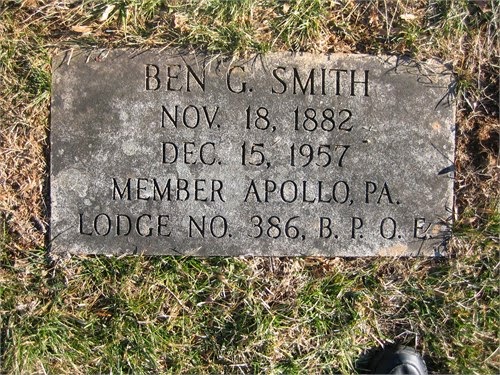 Ben was made a permanent resident on May 8, 1950. He left the home in November 1951. I assume he went home to Pennsylvania but don’t have any facts to back that assumption. He was re-admitted to the Elks Retirement Home in Virginia on March 7, 1953. He’d had no operations or illnesses since leaving the home in 1951. He complained of poor vision.

On December 15, 1957, Ben died at 1 PM in Bedford within 10 minutes of having a heart attack. He was buried in the Elks National Cemetery, a section of Oakwood Cemetery designated as the burial place for residents of the Elks National Home.
Posted by Denise at 2:46 PM