On August 16, 1850, 15 year old Leroy lived with his parents and siblings in the Eastern Subdivision of Anderson. Census records list him as a farmer.

On December 4, 1854, 19 year old Leroy married Amanda Elizabeth Scott. Together they had 11 children—Eliza Ann, Marion Scott, John Newton, Thomas N., William Harrison, John Louis, Brown Lee, Maggie Idora, Elijah Jeffers, Andrew Turner, and William Charles Holland. The parents of Amanda are unknown to me. I found the Talliafirve L. and Lavina Scott family with a 13 year old daughter named Amanda living in Anderson in 1850 census records. This could be her family, but I honestly don’t know yet.

Leroy’s third child, John Newton Holland, was born and died on May 3, 1860. He was buried at Neal’s Creek Baptist Church Cemetery in Anderson. 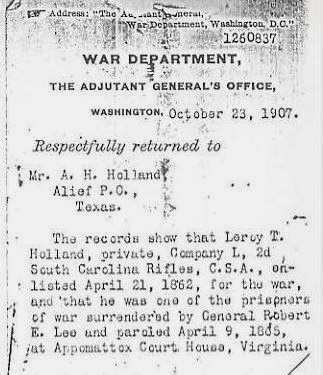 On June 2, 1860, Leroy, Amanda, and two children—Eliza and Marion—lived in Regiment 4 of Anderson County. A day laborer, the value of Leroy’s personal estate was $150.

On April 21, 1862, Leroy joined the Southern cause and was enlisted at Adams Run by Col. J. V. Moore as a private with Company L, Second South Carolina Rifles, Jenkins Brigade, C.S.A. Col. Moore was killed in action at the Second Battle of Manassas in August 1862. Leroy survived till the end. His movements during the Civil War follow:

It appears that Leroy was absent/sick/in the hospital often. He was in the hospital for much of August 1862 but returned to duty on August 20. Was he well enough to fight in the Second Battle of Manassas—a battle that was a significant victory for the Confederates? This battle took place August 28–30, 1862 so it’s possible. By September 1862, he was again absent—on furlough.

I’d love to know how Leroy traveled back to South Carolina after the war ended in April 1865. Did he take a train? Ride a horse? Or was he one of the unlucky ones that walked home? Whatever his mode of transportation, his family was waiting for him and together they picked up the pieces and went on with life when he returned.

Unfortunately, the hard times didn’t end with the Civil War. Two and a half years later, Leroy’s sixth child, John Louis Holland, was born on January 21, 1868. He died six months later on June 26 and was buried at Neal’s Creek Baptist Church Cemetery in Anderson.

The hard times continued when at the age of 12, Leroy’s fourth child, Thomas N. Holland, died on October 22, 1873. He was buried at Neal’s Creek Baptist Church Cemetery in Anderson.

Elizabeth (Majors) Holland, Leroy’s mother, died on February 27, 1876. John Holland, Leroy’s father, died on September 9, 1877. It’s believed they were both buried in the Math Cobb Cemetery across the railroad from the old home place on Pea Creek. John had acquired quite a bit of land and upon his death, the land was divided among his children. Leroy built a house on his portion of the land and there raised his family.

The end of the year brought another blow to the family when Leroy’s wife Amanda, who was in her mid-30s, died on December 18, 1877. She was buried at Neal’s Creek Baptist Church Cemetery in Anderson along with the four children who died before her.

What would life have been like for Leroy who now was left to raise his family alone? He needed help so it didn’t take long before he married again. On August 3, 1879, Leroy married Cindarilla Darliska Amanda Hall, daughter of Aaron Hall and Clementina Norris Hall, at the old home place in Anderson County, South Carolina. Witnesses were Jap (probably Jasper) Vandiver, Elijah Holland, Baskin Hall, and Aratirah Hall (no relation). Together they had three children—Aaron Hall, Lawrence Lafayette, and Joe Norris Holland.

On June 1, 1880, Leroy and his second wife, Amanda (Hall) Holland, lived in Broadway, Anderson County, South Carolina along with Harrison, Brown, Elijah, Andrew, and Charles. The record is marked “married during the census year” beside Leroy’s name. Leroy was a farmer who couldn’t read or write.

The fall of 1883 brought death again to the Holland family. Leroy’s oldest child, Eliza Ann Holland, died at the age of 27 on September 10. She was buried at Neal’s Creek Baptist Church Cemetery in Anderson.

In the late 1880s, Leroy helped bring together the Civil War veterans of Anderson County. It probably helped them to come together to reminiscence about the war now that it was a fading memory. On December 8, 1887, The Anderson Intelligencer published the following article—Confederate Soldiers. With a view of effecting a permanent organization of the Survivors from Anderson County in the late war, there will be a meeting at Anderson, S.C., on Tuesday, the 20th of December inst., at 10 o’clock, to which everyone who now resides in Anderson County, and who served in the Confederate army, are invited to attend. Some of the objects of the organization will be to look after the welfare of comrades who are now, or may hereafter become destitute by reason of wounds or disease, for preserving the records of our separate commands, and cultivating a more intimate, social relation between old comrades. Signed, W. W. Humphreys, D. N. Major, B. F. Whitner, L. T. Holland, W. P. Tribble, B. C. Martin, J. L. Mauldin, W. D.Hall, S. J. Emruerson, Jno. H. Jones, J. M. Elgin, I. W. Martin, J. M. Welch, J. Jamison, M. P. Tribblo, A. J. Stringer, J. I. Holliday, J. F. Clinkscales.

The spring of 1890 brought death again twice to the Holland family. On March 26, 1890, Leroy’s son William Harrison Holland died at the home of Jap Vandiver. He was only 24 years old. Another son, Brown Lee Holland, died on April 5. Brown was only 21 years old. Both died in Broadway, Anderson County. The Anderson Intelligencer published the following article on April 10, 1890—Last week we chronicled the death of Mr. Harrison Holland, which occurred on the 25th ult., and now it is our sad duty to note the death of his younger brother, Mr. Brown Holland, who died last Saturday afternoon at the home of Mr. A. A. Carpenter, in Broadway Township. He had attended the bedside of his brother very closely during his illness, and on Sunday after the latter was laid away in the grave, he was stricken down with pneumonia, which gradually grew worse until death came. Mr. Holland was about 21 years of age, and was an upright, worthy young man, whose death is deeply regretted by a wide circle of friends. His remains were laid to rest by the side of his brother in the Neal’s Creek Churchyard on Sunday afternoon, Rev. C. B. Smith, of this city, conducting the funeral services. 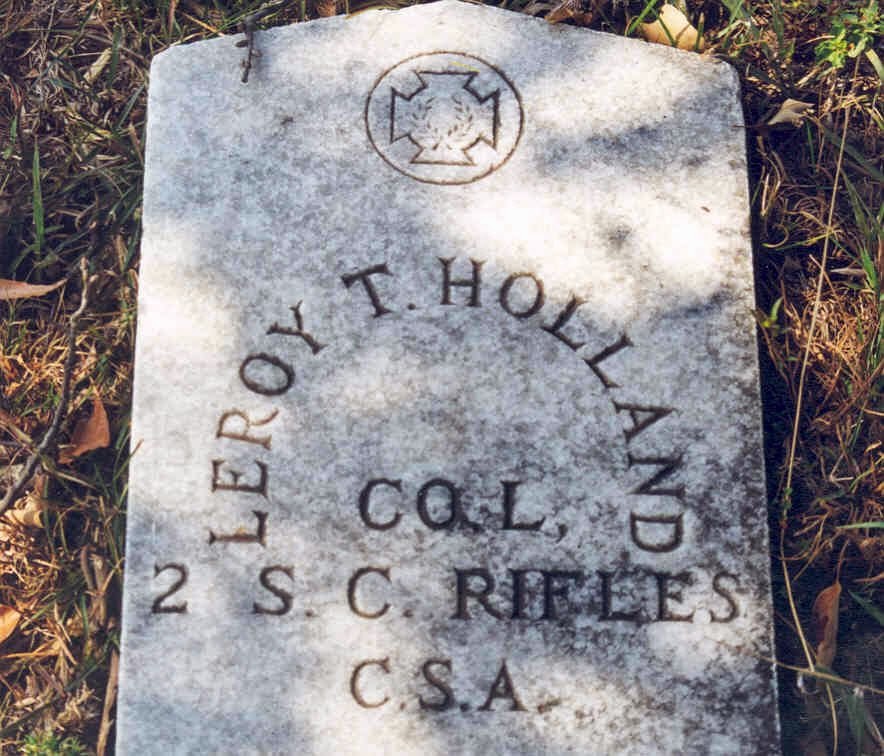 In the early 1890s, Leroy struggled to make a living and borrowed money from Elisha Shambley to support his family. Leroy was unable to pay his debts when the money came due and lost the land for non-payment. Now Leroy was faced with needing a place for he and his family to live so he contacted his friend George Brownlee in Dalton, Whitfield County, Georgia and made a deal to buy a tract of land which he agreed to make payments on. Leroy also paid cash for 80 acres adjoining the Brownlee land. Around January 1891, Leroy, second wife Amanda (Hall), and sons Elijah, Andrew, Charlie, Aaron, Lawrence, and Joe took a train from Anderson County to Atlanta, Fulton County, Georgia where they spent the night. The next morning, they left for Dalton where they were met by Brownlee. Their household goods were held up for 15 days so they stayed with Brownlee at his home in Deep Springs before completing their move. Leroy’s son Andrew was unhappy in Georgia and returned to South Carolina shortly after they moved to their new property. The first year in Dalton they made a good crop but Leroy wanted to clear more land and would cut the finest trees, even though they had plenty of good farming land already in cultivation.

Leroy died of pneumonia in Beaverdale, Whitfield County, Georgia on May 4, 1892. He was buried at Deep Springs Baptist Church Cemetery in Whitfield County. Aaron felt his father had worked himself to death.

On July 20, 1929, William Charles Holland, Leroy’s youngest son with Amanda Elizabeth Scott, submitted an application to the War Department for a headstone for Leroy’s grave. It was shipped a year later and still marks his grave.

Amanda, Aaron, Lawrence, and Joe moved to Alief, Harris County, Texas in January 1895. Much of the information in this blog entry was taken from a typed multi-page letter detailing Hall and Holland family history that was written by Aaron Hall Holland on May 15, 1964. He was 84 years old at the time he wrote the letter. I’m thankful that he took the time to record this family history for future generations.
Posted by Denise at 5:55 PM