The week 4 theme for the 2015 edition of the 52 Ancestors challenge is “closest to your birthday.” I didn’t need to dig through my files to figure out who that person would be because for the last 34 years, I’ve celebrated my birthday with Earl, my father-in-law, our birthdays being five days apart. Unfortunately, last August will be the last birthday we’ll share together as we lost him to a massive stroke earlier this month. Now I don’t consider myself a writer so my 52 Ancestors blog entries have basically been timelines. This blog entry will stray from that format as I feel the need to document the last years of his life. Not that he did anything exciting, just the fact that I’ve been living it with him.

First a little background to understand his state of mind. My mother-in-law was diagnosed with lung cancer in the early 1990s. She was treated with chemotherapy and radiation and did far better than we expected. She was later diagnosed with emphysema. Once she became oxygen dependent, she required a lot of care and Earl was there for her, giving it his all until her death on December 26, 2006. I don’t think he ever recovered from that. They had been married for 55 years.

Their house was an hour’s drive from ours. After she died, we talked to him about moving closer to us but he didn’t want to leave her alone. He eventually had a health scare in which my husband had to race to his house on a rainy Friday night in the middle of rush hour. After that incident, we pushed harder. It took a year to convince him but he finally moved into senior apartments 10 minutes from our house. He had a few good years—making new friends, attending social gatherings, taking day trips to wineries. He even had a girlfriend or two! 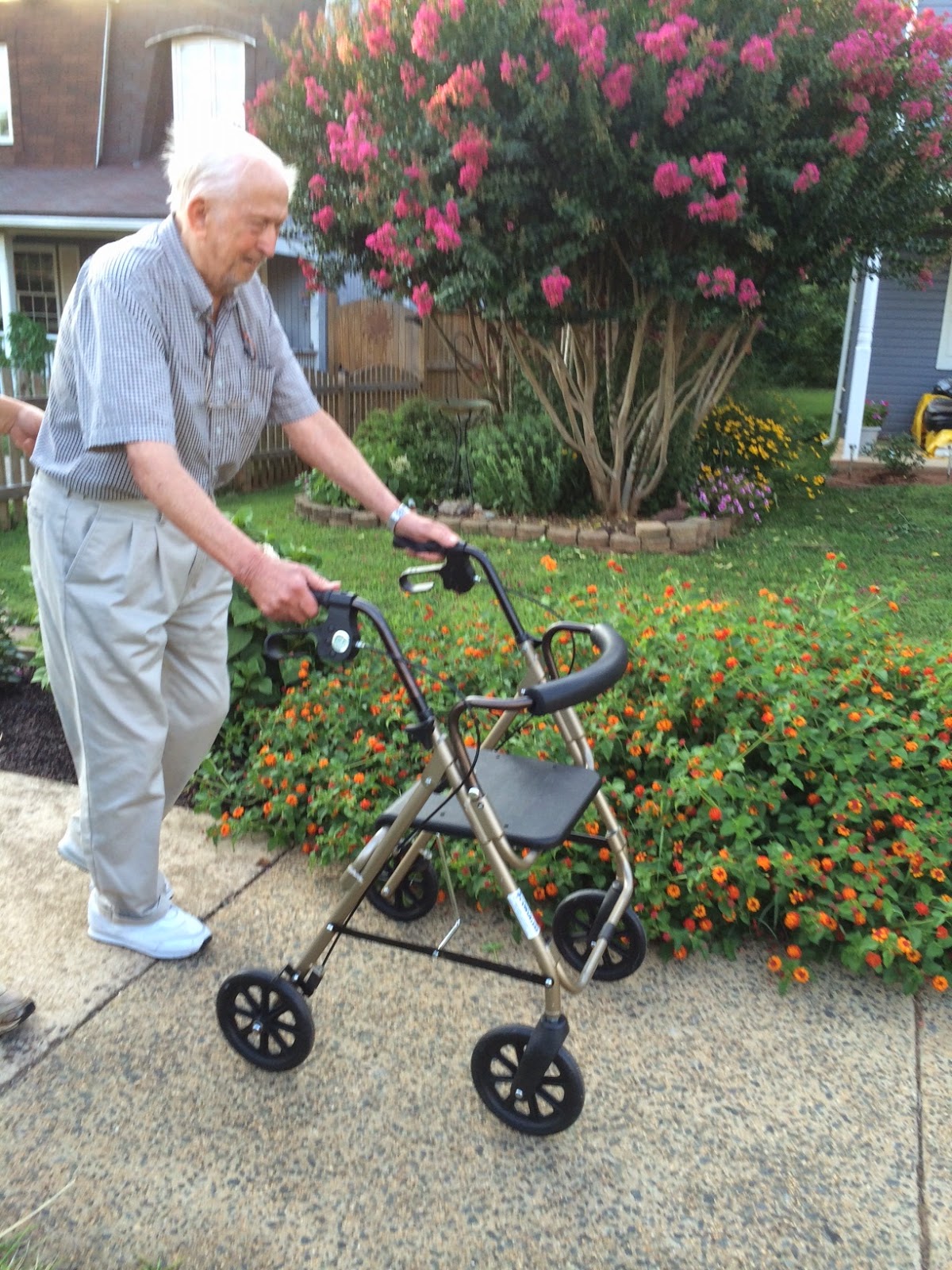 Around 2013, he suffered a minor stroke and then had difficulty communicating. He’d had a series of strokes after open heart surgery years ago and lost his speech but bounced back from that. He was told to take speech therapy both times but refused. That came back to haunt him. Other health issues stacked on in 2013 and into 2014. In March 2014, he suffered from major back problems that caused a lot of pain. He ended up in the hospital and was told the pain was due to arthritis and spinal stenosis. By the time he was released from the hospital, he could hardly walk the pain was so great so he came to live with us. He wanted to go home but it wasn’t safe in his condition. He was very weak when he first arrived and struggled to walk or even hold a fork to feed himself. Physical therapists came to the house twice a week and taught him simple exercises that helped him regain some strength. He fought doing the exercises but went through the motions—probably to shut us up. Once he started to improve, the physical therapist had him take short walks outside which I think he enjoyed. During the spring and summer months, he spent a lot of time on the front porch—watching cars, people, and planes go by. He’d always point out the jet trails in the sky. We bird watched together a lot. He and my husband watched a lot of westerns on TV—Bat Masterson, Gunsmoke, John Wayne, and Bonanza. They both love them so they were happy watching them together.

But he still wasn’t happy and he’d often tell us he wished he would die, that he didn’t want to live anymore. By September, he’s gained enough strength to finally go home. My brother-in-law lived with him but he worked and couldn’t be with his Dad all the time. Once home, Earl only did his exercises when the physical therapist came. His health started to deteriorate again.

Thanksgiving week, he had a minor heart attack. It was at that time, the doctor told us that he couldn’t be left alone anymore so he came back to our house for good on Thanksgiving Day. Again, he was very weak so the doctor set him up for in-home physical therapy and doctor visits. He worked hard, doing his exercises every day, and we started to slowly see him get stronger. He used a walker and needed to use both hands and legs to move about. He wanted to do things for himself and would try to push his walker while carrying his cup or plate. We wanted him to concentrate on the task at hand so he wouldn’t fall so we’d take the dirty dishes out of his hands. He didn’t like us waiting on him though and would give us the “look.” We explained to him that we wanted him to concentrate on walking so he didn’t fall. Finally, the physical therapist backed us up and he gave in. We didn’t get “the look” any more after that conversation. He still had a few falls but fortunately was never hurt by one. 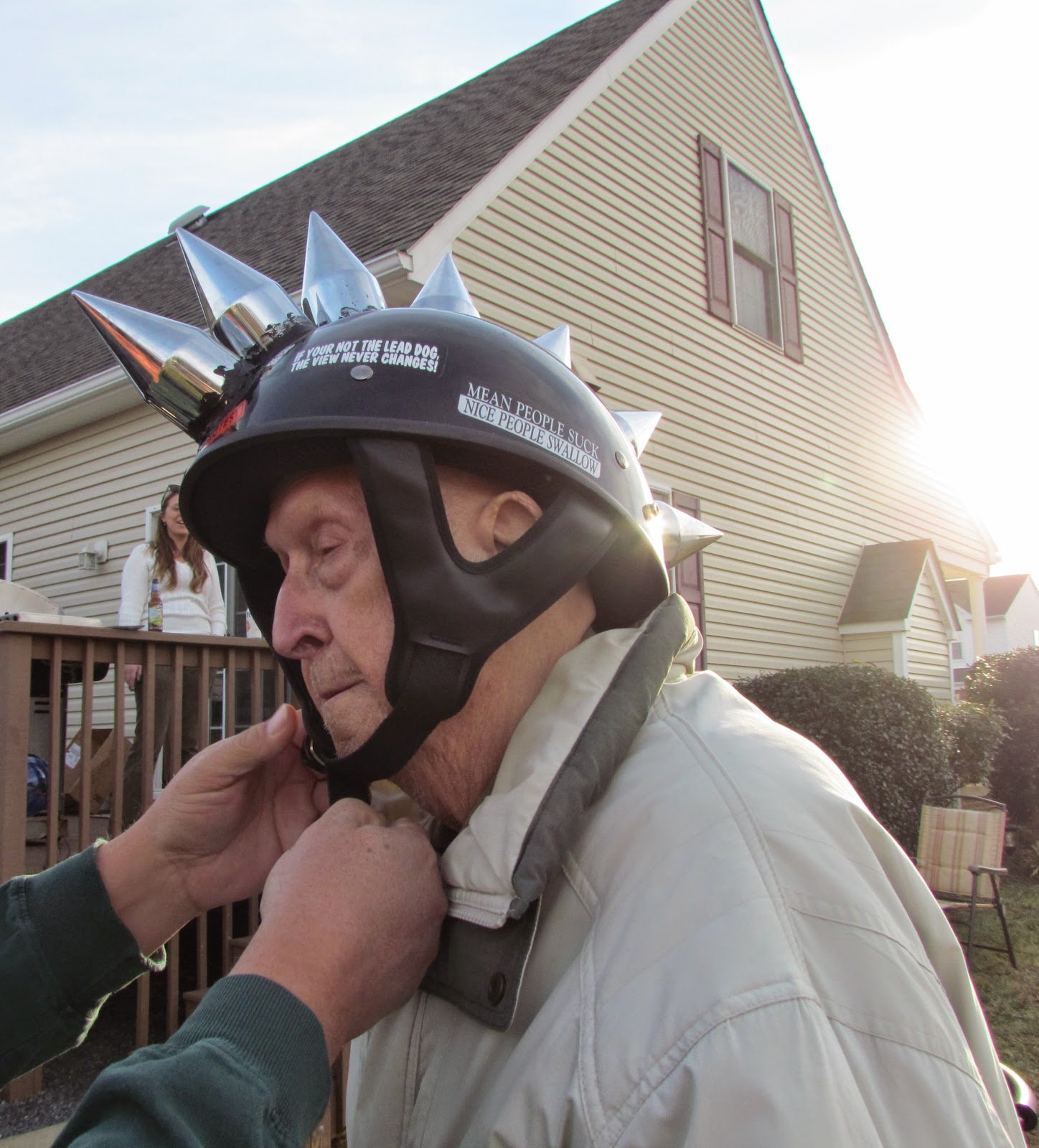 We held our family Christmas party in mid-December 2014 and thankfully the entire family was able to come. Earl was excited about the party and rested at home the week before so he would feel up to going. He looked forward to it and seemed to have a good time. That is until we wouldn’t let him ride the Harley! My nephew arrived on his Harley, parking it in the driveway. Mid-afternoon, Earl asked my husband to take him outside to look at the bike. At least that’s what we thought he wanted to do. They got outside and someone brought a helmet over—a wild looking helmet—and handed it to Earl thinking it would be a cool photo op. Then the unthinkable happened—Earl put the helmet on and wanted to go for a ride. My husband told him no, it was too cold. After being told no several times, Earl started poking his index finger into my husband’s chest and told him “don’t tell me what I can’t do.” Then Earl turned to my nephew, pointed to the bike, twirled his finger around, and told him to “turn it around” so he could go for a ride. That went on for a few tense minutes until he finally got angry, took the helmet off, and went back inside the house. He told everyone goodbye and then headed out the front door, ready to leave. He didn’t talk to my husband or his brother during the entire 45 minute drive back home. Once home, he continued the silent treatment for several hours. He eventually fell asleep and by the time he woke up we had dinner (we made sure we got something he liked) and he was back to normal, not mentioning the Harley again. We ate dinner and then he watched the Christmas parade that came down our street that evening.

﻿
We had a good Christmas Day that ended with us watching a One Direction special. My niece and two great-nieces couldn’t help but sing along and he seemed to enjoy it. Back in the day he might have told them to “shut the *#@* up.” The next day was the anniversary of my mother-in-law’s death. No one mentioned it that day but my sister-in-law stopped by for a visit that evening. As she was leaving, he reached his hand out to her and said “Mama died.” Then after she left, he told my husband he wanted to go the cemetery so they agreed to go the next day. He got up the next morning bright eyed and bushy tailed, heading straight to the bathroom to clean himself up. Something he didn’t bother to do at all some days. He ate a quick breakfast and was ready to go. You could tell he was excited to be going to visit her grave.

As we welcomed 2015, Earl was doing great. He was doing his exercises every day and getting stronger. He had even started talking about going home again, although we weren’t going to let that happen. The doctors made it clear that he couldn’t be left alone. But everything changed on January 10. It was a lazy Saturday hanging around the house watching TV. I cooked dinner and when it was ready called my husband and Earl in to eat. My husband headed to the bathroom to wash his hands and Earl walked himself into the dining room. He pulled his chair out, sat down, and I came up behind him to help push his chair in. As he and the chair moved forward, he slumped over onto his plate. He’d had a massive stroke. Just like that. He was still breathing and had his eyes open but it was as if the light was on but nobody was home. He was rushed to the hospital but he finally got his wish and died peacefully at 1:46 a.m. on January 13. He was ready to go. Their anniversary was on January 12. 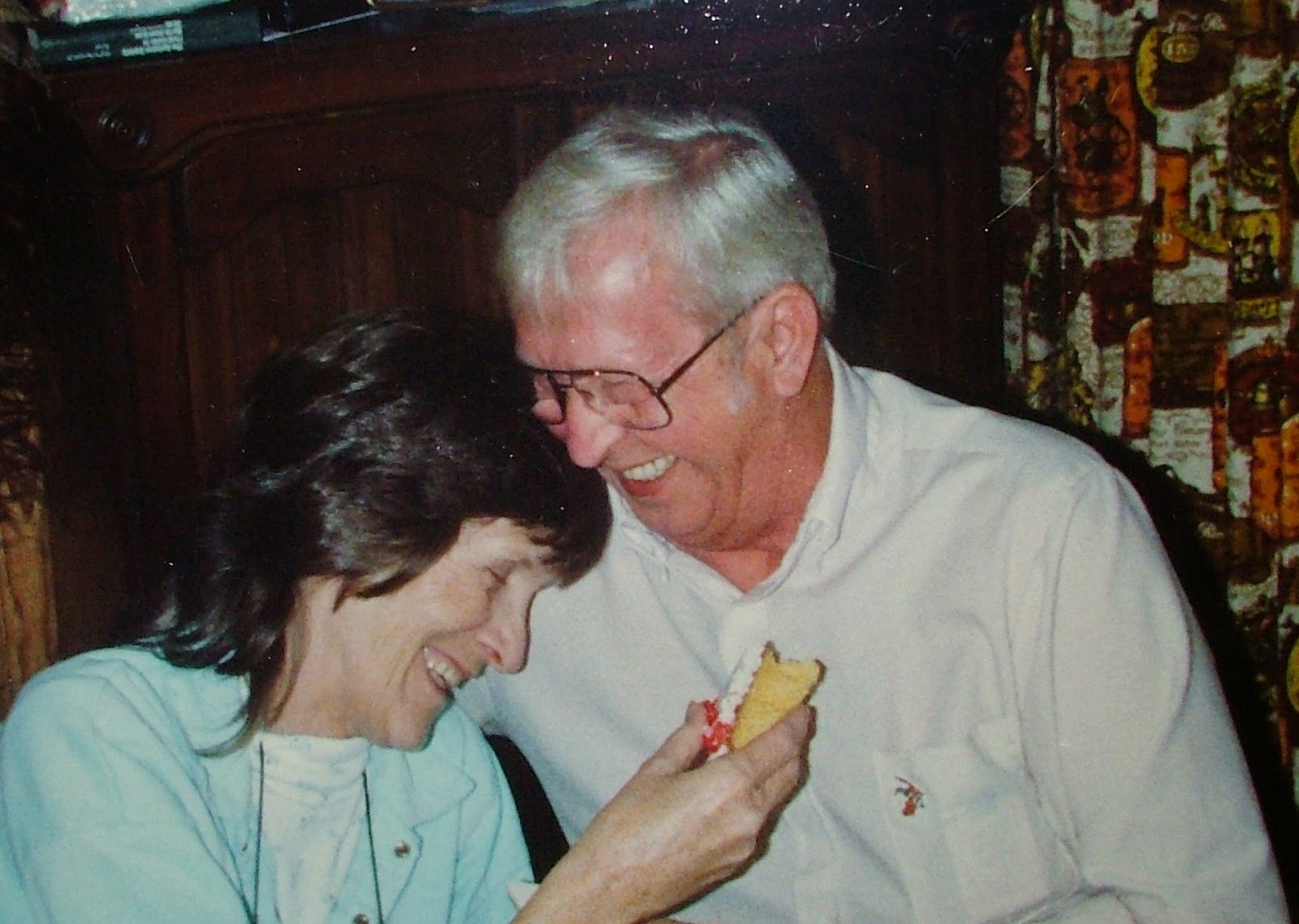 After he died, weird things started happening and we all agreed he was talking to us:
Maybe not weird to some people, but to us, it was spooky.

So there you have it. I just had to tell his story. I loved him and I’ll miss him. Not everyone can say that about their in-law, huh!