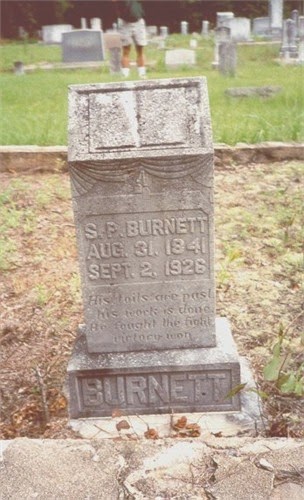 Samuel Pride Burnett, son of William Caton and Drucilla Henson, was born on August 31, 1841 in Blount County, Tennessee. He was the first child of three—Samuel Pride, Edward George, and Mary Elizabeth. We believe the children later took the last name of Drucilla’s second husband, Joseph Burnett. Drucilla and Joseph had two additional children—Madison and Francis. Samuel is my second great-grandfather.

Shortly before turning 20, Samuel joined the Confederate Cause on August 24, 1861 when he enlisted in Atlanta as a private in Company F, Georgia 24th Infantry Regiment (also known as the Gwinnett Independent Blues). He lived in Lawrenceville, Gwinnett County, Georgia at the time. On April 28, 1863, Samuel appeared on a register of the Medical Director’s Office in Richmond, Virginia. On May 8, 1863, he was admitted to General Hospital No. 21 in Richmond with a complaint of debility. I had no clue what “debility” was so as I often do, Googled it. According to Merriam-Webster is it the state of being weak, feeble, or infirm. I’m sure by this time in the war many soldiers had a complaint of debility. Samuel was 22 years old—way too young to be in such a physical state. He wasn’t alone though I’m sure. Samuel returned to duty on May 14, 1863. Less than a month later on June 8, 1863, he mustered out of the 24th Regiment when he transferred to Company E, 3rd Battalion, Georgia Sharpshooters as a private. He was captured on August 16, 1864 by General Sheridan in Virginia during the Battle of Front Royal. Union forces sent him to the Old Capitol Prison in Washington, DC on August 21, 1864. Samuel was transferred to Elmira Prison Camp in Elmira, New York on August 28, 1964; arriving there on August 29. Conditions at the prison were poor and many died. Thankfully Samuel survived prison camp and the war which officially ended on May 9, 1865. He signed an Oath of Allegiance to the United States at Elmira on July 7, 1865, when he was released on July 27, 1865. He returned home to Stone Mountain, Georgia, a different man I’m sure. The Oath of Allegiance noted that Samuel’s complexion was fair; his hair dark; eyes grey; and his height 6’, 3”. 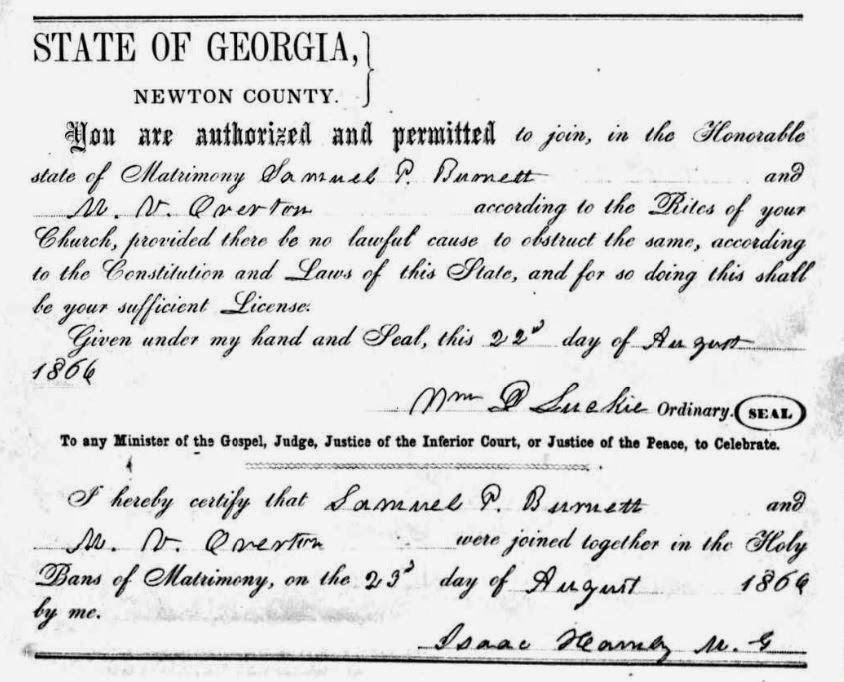 On July 28, 1870, Samuel, Virginia, and their sons John and Thomas lived in Covington, Newton County, Georgia. Samuel was a farmer. Virginia was enumerated as Lily V. Burnett and she was keeping house.

Samuel appears on the Georgia Property Tax digest for the years 1873 – 1877 living in District 476 of Rockdale County.

By June 18, 1880, the Burnett’s have a full house with eight children, the oldest being 12 years old. They lived in the Harbins District of Gwinnett County, Georgia. Still a farmer, Samuel now has his oldest sons John and Thomas working on the farm beside him. Virginia is enumerated as Millie V. Burnett.

Samuel appears on the Georgia Property Tax digest for the years 1883 – 1887 living in the Buncombe District of Loganville, Walton County.

On May 7, 1900, Samuel filed an Indigent Pension Application in Walton County, Georgia. He stated that he had lived in the state of Georgia since 1850; was born August 1841 in Blount County, Tennessee; and was not present with his company when it surrendered at Appomattox Court House in Virginia. He stated that he filed for the pension on the grounds of infirmity and poverty—he was in feeble health and not able to earn a support by his own or any kind of labor. He owned no property. He further stated that he was supported during 1898 and 1899 by the help of his family and by what little he could do trying to farm, earning about $65. He had a wife and six children that had no means of support working on rented land. They had no homestead. This was his first application for a pension. T. K. Mitchell of Lawrenceville witnessed the application stating that he had known Samuel for 40 years. Mr. Mitchell and Samuel fought together in the Gwinnett Independent Blues during the Civil War. Drs. A. M. Brooks and Luke Robinson examined Samuel and stated that he was not able to work from the effect of internal hemorrhoids of five years standing producing great pain. He had extreme nervousness, his eye sight was failing rapidly, and his general health was undermined from age and labor.

On June 6, 1900, Samuel and his family lived in the Buncombe District of Walton County. Son Abijah and his wife Eugenia lived next door. The census record shows that Samuel and Virginia had been married for 34 years. They’ve had 14 children, two of which have died. Samuel was a farmer. There were still six children in the home, ranging in age from 11 to 20 years. 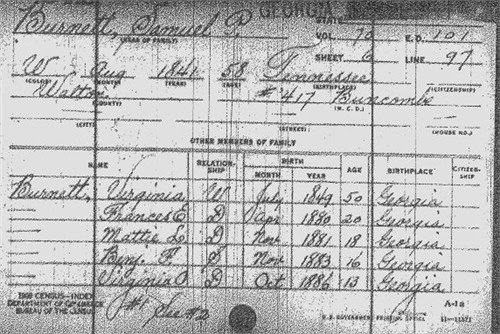 On April 25, 1910, the family lived in the Broken Arrow District of Walton County. As 68 years of age, Samuel had put his hoe down and was no longer farming—the enumerator listed his occupation as “none.” His daughter Lula M. (age 27) and son Joseph B. (age 22) still lived at home.

On February 13, 1920, a widowed Samuel now lived with his son Thomas in the Walker District of Greene County, Georgia. At age 78, he was enumerated as a farm laborer on a home farm. On this day, three generations of my direct line lived in the same household—Samuel (my second great-grandfather), his son Thomas (my great-grandfather), and Thomas’ daughter Florrie (my grandmother). Thomas’ son Luther and his wife Etta Bell lived next door.

Samuel died on September 2, 1926 in Monroe, Walton County, Georgia. He was buried at Shiloh Primitive Baptist Church Cemetery in Loganville beside his wife Virginia. His death certificate listed him as being divorced (a mystery to me). An Application for Pension Due Deceased Pensioner in the amount of $100 was filed which covered funeral expenses of $95. The E. L. Almond Company of Walton County handled the burial arrangements.
﻿﻿﻿
Posted by Denise at 7:46 PM