Natalia Alekseevna Beklemisheva was born on January 19, 1896 in Moscow, Russia. Unfortunately, I haven’t uncovered the names of her parents yet but did find a newspaper article stating that her mother died when she was one and her father when she was five years old. After the death of her father, her uncle Peter Porohovshaiv, a lawyer and judge, adopted Natalia. Uncle Peter provided her with a good and active life which included travel to England, France, and Switzerland. She was taught by governesses and was fluent in Russian, French, and English.

From 1914 to 1917, Natalia trained to be a nurse at St. Eugene Hospital at Petrograd. Upon graduation, she traveled to London to visit her Uncle Peter who according to an Atlanta Constitution news article dated July 17, 1921, “was head of the Russian commission for placing ammunition orders and acting as legal advisor for his country.” While in London from 1917 to 1918, Natalia volunteered as a war nurse at a hospital in Harrogate, England. She later returned to Russia and worked in hospitals there, eventually being transferred to a hospital in Siberia. It was in Siberia that she met her future husband, Dr. Hal McCluney Davison, the son of Charles C. Davison and Elizabeth Callahan, born on October 2, 1891 in Woodville, Greene County, Georgia. Hal was an American army surgeon serving in Russia. He completed his service to the Army and then began working as a superintendent at a Red Cross hospital in Tomsk, Siberia. The hospital of 2,000 beds was staffed by 40 nurses, including Natalia. It was this hospital where Natalia met Hal, who was brought in with a case of typhus, a bacterial disease spread by lice or fleas.

Natalia was assigned to nurse Hal back to health. Within nine months of meeting, Natalia and Hal were married on March 31, 1920 at St. Paul’s Rectory in Vladivostok, Russia. Rev. A. G. Lesta performed the ceremony. Charles A. Jacobus, vice consul of the United States at Vladivostok was the witness. Natalia and Hal were actually married three times. A second ceremony took place at a Protestant church in Vladivostok by a Lutheran minister. And a third ceremony took place in the Russian Orthodox Church on the Russian Islands, near Vladivostok on April 6. 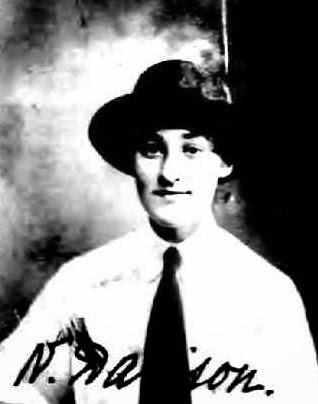 After joining the crew of the S.S. Yomei Maru along with her husband, Natalia submitted a passport application on August 31, 1920. She intended to sail from the port of New York on board the Yomei Maru on September 7, 1920 traveling to France and the British Isles performing work for the American Red Cross. Natalia would use her skills as a nurse and her husband a doctor. Her passport contained a letter dated August 31, 1920 written by J. Keogh, Associate Director of the Bureau of Personnel at the American Red Cross, to a Mr. Hoyt, a Department of State passport agent stating “This will serve to introduce Mrs. Natalie A. Davison who is making application for passport. Mrs. Davison is returning to Petrograd, Russia, with the Colony of Russian children being repatriated under the auspices of the American Red Cross.” In another Red Cross letter dated September 1, 1920, F. J. Mulhall writes an endorsement for Natalia which states “This will serve as an endorsement by the American Red Cross of the passport application of Mrs. Natalie A. Davison, who is accompanying the Russian children from Siberia, who are being returned to their homes by the American Red Cross. Mrs. Davison will be obliged to travel in Great Britain and France, and we should greatly appreciate the inclusion of the above mentioned countries in the passport.” The children had been separated from their parents due to the conditions in Russia during World War I. They were placed on board “the Yomel Maru, a Japanese freighter, which had been chartered by the American Red Cross, in order that the children of Russia, about 300 in number, who had been separated from their parents on account of the internal conditions in Russia for two years, might be cared for. Admiral Kolchack, head of the government, requested the American Red Cross to take these children, both boys and girls to a Russian port on the Pacific and place them aboard the freighter, for a trip around the world, hoping that conditions would be settled on their return” according to the Atlanta Constitution article. The article further stated “The Yomel Maru was totally without accommodations, and these conveniences were hurriedly built for the trip. A staff of teachers was appointed, lessons organized, games and sports arranged, athletic drills and exercises made part of the daily program, while picture shows and dances formed some of the amusement features of the trip. The boat left on July 13, and spent two days in Japan, her first port. From there she made straightway for San Francisco, and two weeks were spent in the California city. New York via the Panama Canal, was the next stop, with a stay of two weeks on Staten Island. Here the children were entertained on their first visit to America by numerous patriotic societies. The destination was Finland, the western entrance to the borders of Russia, and after a trip lasting over three months, these children were turned over to the department of civilian relief, and 600, meaning a very large percentage, found their parents and relatives.” Another article ran in The Ogden Standard-Examiner in Ogden, Utah on August 18, 1920 detailing the plight of what they described as “800 War Waifs Thrilled by Trip’ Round World.” The children came from educated Russian families who feared for their lives and as the revolution came close to their homeland moved their children, along with nurses and teachers, from Petrograd to Siberia. As the armies drove closer to Siberia, the Red Cross was contacted to help save their children. The children were sent to Vladivostok by train, and then moved to Russia Island where they lived in army barracks. They were aided by doctors and nurses from many countries, including America, Russia, Canada, and Manila. Brought along to help were prisoners from Germany and Austria.

Natalia and Hal arrived in the port of New York on December 20, 1920 on the S.S. Nieuw Amsterdam which sailed from Plymouth, England on December 11. Their home address was listed on the passenger list as 40 Elmwood Avenue, Atlanta, Georgia.

Natalia’s son Peter Hal Davison was born in Atlanta, Georgia on April 7, 1921. She named him after her Uncle Peter.

A daughter they named Natasha Davison was born on December 3, 1922, most likely in Atlanta. She died of hydrocephalus on April 26, 1923 in Atlanta.

On June 4, 1925, Natalia sailed from the port of New York on the liner La Savoie to visit relatives and friends in France and Germany. Her traveling companion was her four year old son, Peter.

On June 27, 1927, Natalia arrived alone in Plymouth, England having sailed on the Veendam from the port of New York. The ship record listed her as a 28 year old housewife who would be living at London, 20, Strand.

A second son they named Alexis Hal Davison was born on January 20, 1931 in Atlanta.

On April 3, 1940, Natalia and Hal were still living in Atlanta. She was enumerated as Natalie. She had completed four years of college. Son Peter, age 18, still lived in the home and was in his first year of college. Their second son Alexis, age 9, was in the third grade. Natalia’s Uncle Peter, now age 72, lived with them and was a naturalized citizen of the United States. A friend, Walter F. Marah, age 22 from California, lived in the home as well as Walter Carmichael, a 42 single white male, enumerated as a servant.

Natalia’s husband Hal died on April 26, 1958 in Atlanta. He was buried at Westview Cemetery in Atlanta.

In 1960, a widowed Natalia was living at 4047 Tuxedo Road NW in Atlanta. She was working as a teacher at Pace Academy.

In 1962, Natalia’s son Alexis was accused of being a spy in Moscow, a charge she called “completely ridiculous from end to end.” Alexis was an Air Force doctor for the American embassy in Moscow. Natalia feared that her connection to Russia may have been a source of the spy accusations.

Natalia died on November 25, 1983 in Atlanta. She was survived by her sons Peter and Alexis, eight grandchildren and two great-grandchildren. Her funeral was held on November 28 at St. Mary of Egypt Orthodox Church with Father John Townsend officiating. She was buried at Westview Cemetery in Atlanta.

Natalia is not a direct ancestor but rather part of a collateral line connecting through my Hobbs families. Several years ago while working on my Hobbs line with another researcher, we got sidetracked by the Davison line. The Davison’s were a prominent family from Greene County, Georgia. Many of them went on to become judges, lawyers, and politicians in Athens and Atlanta, Georgia. For that reason, we found tons of newspaper articles and I found myself spending hours searching through the vast amount of free digitized historical newspapers found in the Digital Library of Georgia. I don’t know who funds the digitization of these historical records but I would like to say THANK YOU!

I loved researching the life of Natalia Alekseevna Beklemisheva Davison. It is always exciting to learn real stories about our ancestors. The paper trail left behind for Natalia was vast, including newspaper articles, passports, census and ship records, marriage records, and city directories. This is a good case of finding the other records Amy Johnson Crow mentioned in her January 23, 2015 blogpost Are Your Ancestors the Average of 5 Records?. The records I found for Natalia provided a treasure trove of information giving you a real sense of the person she was.


References:
Posted by Denise at 7:30 PM