On June 9, 1900, Jennie lived with her family in the Church District of Wetzel County, West Virginia.

Jennie married John George Davis on October 16, 1908 in Wetzel County. Together they had four children—Chester Leo, Lavester Otto, Esther Marie, and a daughter. The names of John’s parents are unknown to me.

On May 11, 1910, Jennie, John, and Chester lived on the Shinnston and Middlebourne Turnpike in the Sardis District of Harrison County, West Virginia. Jennie was able to read and write. John was a tool dresser in an oil well.

A second son, Lavester (AKA Speck), was born on December 23, 1911 in Clarksburg.
Jennie’s daughter Esther was born in August 13, 1913 in West Virginia, most likely Clarksburg. Esther’s death certificate incorrectly records Texas as her birth location. It also listed her mother’s maiden name as “unnamed.”

A second daughter was born on August 18, 1916 in Wetzel County, West Virginia. Unfortunately, the birth record doesn’t list a name but it does list her as “alive.” I haven’t been able to figure out what happened to this daughter but I don’t believe she survived.

In November 1919, Jennie’s husband, John George Davis, had her institutionalized at Weston State Hospital for the Insane. Supposedly Jennie’s problems started when she was carrying her first child, Chester. After his death in 1915, along with other troubles, she had a nervous breakdown and was sent to Weston. Why would John do this to Jennie? That is a big family mystery. In 1966, Jennie’s daughter-in-law Thal Davis (wife of Lavester), wrote a letter to Jennie’s nephew, Ralph Murphy. Thal admitted that she had never met Jennie; however, she felt her children had a right to know something about their grandmother so she was trying to find out what she could. Thal claimed to have written the Church family lawyer who told her that John “had put Jennie at Weston and no one was supposed to take her out without her husband’s consent, but that Jennie was not insane.” Thal told Ralph that Lavester said his father John had made him promise never to dig up the past. John made Lavester believe his mother had tried to kill her children with butcher knives, hammers, or anything she can get her hands on. Jennie’s family did not believe this was the case. Lavester’s daughter [name withheld] also wrote a letter to Ralph and stated that she attempted to get information from the Church family but Jennie’s siblings wouldn’t respond to her letters. She said that she received a statement from Jennie’s parents that read “she [Jennie] had held a gun on her dad and tried to hit her mother with an iron pipe.” After sending Jennie to Weston, her husband moved to Texas with the children. Once in Texas, John hired Sara Mitchell to raise Lavester and Esther. It’s not known how he knew Sara or how he came to hire her. In her letter, Thal stated “… I grew up with Speck and his sister in our home because his father hired my father’s mother to keep them then walked out on them and never saw them for years at a time and never paid my grandmother anything in all those years … he’d come every five or six years to see them for one day and night, maybe he’d bring fruit and candies and that’s all he ever did for them …”. John apparently moved on to California, leaving his children behind in Texas.

On January 15, 1920, Jennie was enumerated as a patient at Weston State Hospital for the Insane located in the Court House District of the town of Weston, Lewis County, West Virginia.

On April 19, 1930, the census enumerator recorded 46 year old Jennie as a patient at Weston State Hospital. Jennie’s son Lavester (age 17) and daughter Esther (age 16) are found living as boarders in Hood County, Texas in the home of Sara Mitchell, who was Thal’s paternal grandmother. Sara helped raised Lavester and Esther according to Thal.

Jennie died of a cerebral hemorrhage and arteriosclerosis on February 26, 1963 at Weston State Hospital in Weston. She was buried beside her parents at Thomas Chapel United Methodist Church Cemetery in Glover Gap, Wetzel County, near the town of Hundred. 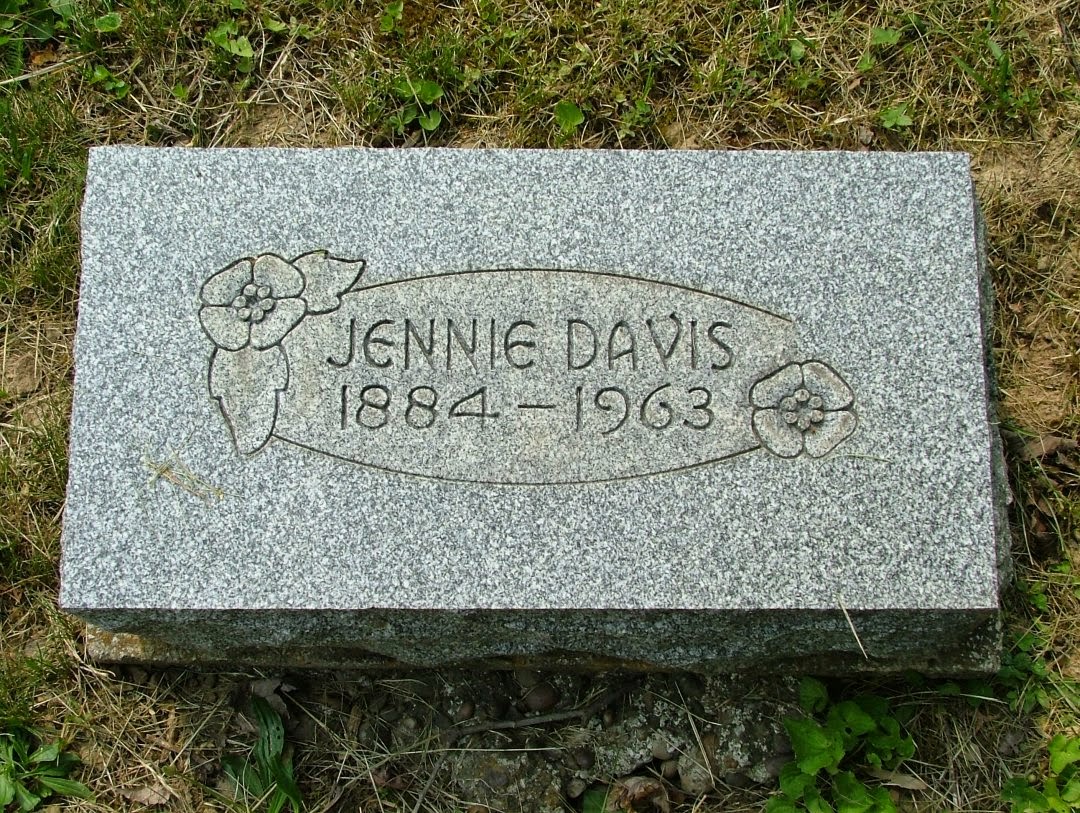 Jennie’s life was not a happy one. She married a man who had her committed to an insane asylum at the age of 35 and then abandoned her, moving out of state with her children. The trip from Wetzel County where her Church family lived to Weston was an hour and a half drive by today’s standards. I’ve been told that family members visited her although I doubt they made the trip often. There was much bitterness in this family over the situation. Jennie spent the remaining 44 years of her life at Weston State Hospital, most likely dying alone.
Posted by Denise at 8:27 PM