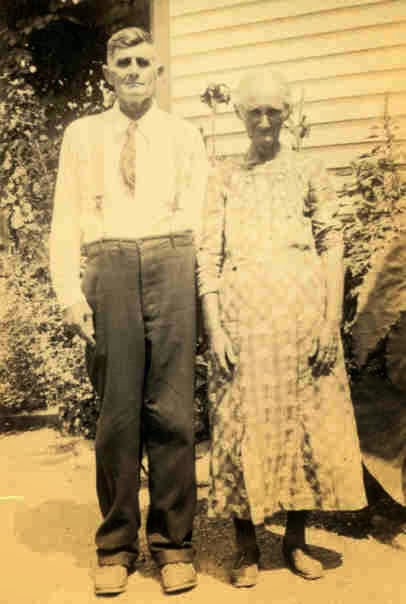 This blog entry is about my second great-grandfather Samuel Cas Shields and boy does it have me confused! I’ve tried to weave the stories passed down through the generations into information pulled from actual records. What I find are that the dates and ages are all over the place. I asked my husband to read what I had written and he was confused as well. He suggested I needed help in figuring this puzzle out!

I note that some of the information shared is based on memories of one of Cas’ grandsons. As he shared his memories, he stated that none of what he told me was fact—it was only memory and hearsay—but it was to the best of both in his mind.

Samuel Cas Shields, the son of Mary Ann Spurgeon, was born November 26, 1869 on Shields Mountain in Sevier County, Tennessee. He went by Cas, his middle name. As to who Cas’ father was—that is the question. According to family lore, Cas was illegitimate—the son of Mr. Dunlap, a traveling salesman who sold rubber buggy tires and whips for the Dunlap Tire Company. His mother Mary Ann married Jesse William Shields, a blacksmith, most likely in the early 1850s. Together they had at least six children before Cas was born in 1869—Martha C., Hannah Elizabeth, Sabra A., Sarah Jane, John David, and William Sherman Shields. Years later, Cas’ wife Martha Ogle Shields would tell a daughter-in-law that Jesse wasn’t Cas’ father. She told her daughter-in-law that Jesse had been dead for seven years by the time Cas was born and that it was quite a scandal at the time. She also told her daughter-in-law that Cas was raised by his older sister Sally (Sarah Jane Shields) and her husband William D. Tritt. She said Tritt had a daughter named Roxie from a previous marriage and that Roxie and Cas grew up together. I have no clue as to whether any of this is true. So far, I haven’t found any proof of who Cas’ father was. If anyone reading this has found anything, I’d love to hear from you.

On July 18, 1860, Mary Ann (age 29) and Jesse Shields lived in District 4 of Sevier County, Tennessee. Jesse was a blacksmith. Mary Ann and Jesse had three children when this census was recorded—Martha (age 5), Elizabeth (age 4), and Sabra (age 1). Jesse’s mother was named Sabra, so perhaps their youngest daughter was named for her grandmother. I include this information just for the point of tracking the family.

On July 17, 1870, six month old Cas lived with his mother Mary Ann (age 40) and siblings Martha, Elizabeth, Sarah, John, and William in District 13 of Sevierville, Sevier County, Tennessee. Mary Ann was keeping house. The record doesn’t state that Mary Ann was a widow but no adult male lived in the household. According to Find A Grave Memorial #124853090, Jesse died in Alabama in 1869. I don’t know why Jesse was in Alabama but this conflicts with family lore that Jesse had been dead for seven years before Cas was born. Since Cas was born in November 1869, it’s conceivable that Jesse fathered Cas in early 1869 and then left for Alabama where he died. Unfortunately, I can’t find any other death record for Jesse so don’t know what month he died. On another note, Cas was listed as 6/12 (6 months) in this census record which would have meant a birth month of January. This conflicts with a birth month of November provided on all other records for Cas.

On June 23, 1880, Cas lived with his mother (age 57 – note the age discrepancy here) and siblings in Richardson’s Cove, Sevier County, Tennessee. Mary Ann was listed as a widow in this census record. All of her children still lived at home, with one addition—a grandson (age 1) named E. O. Shields. At age 10, Cas was enumerated with the occupation “works on farm,” vs. “at school.” Years later in 1940, a census enumerator would record that the highest grade Cas completed was the fifth grade so I assume that Cas no longer attended school by this time. When Cas did attend school, I imagine it would have been in a one-room schoolhouse for just a few months since children were needed to help plant and harvest the crops on the farm. Cas finished the “Brown Back Speller.”

Now back to family lore—supposedly Cas met 13 year old Martha Ann Ogle while gathering wild ginseng which he would later sell to pharmacy companies for $1 per pound. I’m told that at the time, a woman could marry at age 15 and a man at any age. The local Clerk of the Court, S. P. Proffitt, was a cousin and good friend to Cas. Proffitt allegedly falsified the marriage bond and certificate for Cas and Martha and they were married in Sevier County on June 11, 1891. Now to try to figure out the facts. Martha was born in 1870 so if she married at age 13, the year would have been 1883. The marriage record is dated June 1891. Cas and Martha’s first child, James Stewart Shields, was born on November 15, 1891, five months after Cas and Martha married. Years later, Martha told a grandson that she was 15 when she had her first child. If that were the case, the year would be 1885 and Stewart was born in 1891. If the records are correct, Martha was born in 1870; Stewart was born in 1891. That would make Martha 21 when she had her first child. Or perhaps Martha had a child before Stewart who didn’t survive and no one knew about it. It’s so confusing—dates and ages just don’t match up!

On June 8, 1900, Cas and his family lived in the 13th Civil District of Sevier County, Tennessee. Both Cas and Martha were listed as 30 years of age and had been married for eight years. This record reflects a marriage in 1892. The census record showed that Martha had four children (James, Milas, William, and Walter), all of which were living and in the home. Cas rented his farm.

﻿
Around 1910, Cas gathered his wife and children and posed for a family photo. 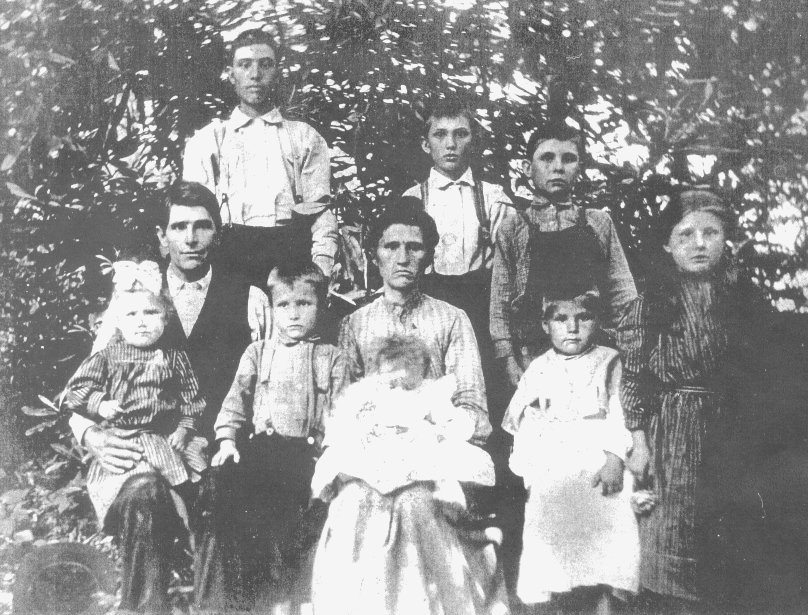 
On April 26, 1910, a widowed Mary Ann (age 79) lived with her daughter Sarah and son-in-law William Tritt in the White Pine Precinct of Jefferson County, Tennessee. This proves the connection to Sarah and William Tritt.

On May 3, 1910, Cas and his family still lived in the 13th Civil District of Sevier County. The census enumerator recorded Cas’ age as 40 and Martha’s as 39. Cas and Martha had been married for 19 years (sounds right), both only once. Martha has had nine children, all of which were living. Cas and Martha’s oldest son, James, was no longer living at home. Cas was a farmer on a general farm and was able to read and write. Three of his sons were farm laborers—Milas, William, and Walter. 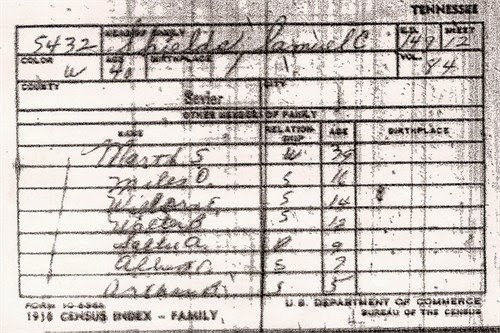 Sometime between 1910 and 1913, Cas moved his family to Georgia. This timeframe is based on the fact that according to census records, their youngest child, Maude, was born in Georgia. Cas caught the train from Knoxville, Knox County, Tennessee to Dalton, Whitfield County, Georgia in search of a place to move his family and farm. It was felt that farm land in north Georgia was better and cheaper than the mountain land around Sevierville. There was also an Ogle family member (Cam Ogle) living in Dalton so it made sense to go there. Cas bought land between Praters Mill and Deep Springs and then went back to Sevierville to get his family. They made their way to Dalton using two two-horse wagons, each pulled by two mules with two cows, four dogs, two coops of chickens, and all of their furniture consisting of a kitchen stove, a table and 10 chairs, and four bed steads. The children walked and rode in the wagons. It took them 8 to 10 days to make the trip, traveling approximately 120 miles. Cas later referred to the trip as being fun—they camped by creeks and in farmer’s fields. It was more like a picnic to them. Cas picked a farm on top of a hill with a long drive, settled in, and started farming his land.

It doesn’t appear that Cas served in the military, at least I don’t find any records for him. Can I assume he was too old by the time World War I began? He also had a large family. Would he have been given a pass because of that? Nevertheless, after the end of World War I, Cas and his sons planted fields of cotton, which sold for over $500 per bale. They did very well and lived high to the point where Cas had to borrow money to replant the next year.

On January 3, 1920, Cas and his family lived on Lower Varnell Road in the Varnell District of Whitfield County. Cas was 50 and Martha 51. Cas was farming on a rented farm.


On February 10, 1930, Cas’ daughter Maude died in Georgia at the age of 15. Her last name was Horrell so it’s assumed she was married. Its possible Maude died in childbirth. She was buried at Grove Level Community Cemetery in Dalton. I haven’t been able to find any other information on Maude so she’s a mystery to me.

On April 19, 1930, Cas and his family lived at Prater Mill and Deep Springs Road in the Lower Tenth District of Whitfield County. Blaine was the only child left at home now. His son Stewart and his family lived next door. Cas was enumerated as 63 years of age and Martha age 57. The census record showed that Cas was 21 and Martha 18 when they married. Cas was a farmer on a general farm.

On April 3, 1940, Cas, Martha, and Blaine lived at Praters Mill Camp and Grove Level Road in the Lower Tenth District of Whitfield County. They had lived in this house since at least 1935. Cas was enumerated as 70 years of age and Martha 68 years. He owned his home which was valued at $1,000. The census enumerator didn’t list an occupation for Cas. Had he retired from farming at this point? His son Milas and his wife Effie lived five houses from Cas and Martha.
Cas’ daughter Pearl (Shields) Hester died of tuberculosis at the age of 33 at her parent’s farm in Dalton on July 26, 1941. A family member recalls being able to hear her breath outside on the porch. Pearl left five young children behind ranging in ages from 2 to 11. Pearl was buried beside her sister Maude at Grove Level Community Cemetery. 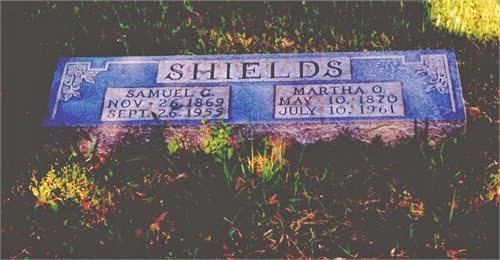 Now, are you as confused as I am? Hopefully I’ve told the story in a manner that makes sense. Maybe I’ll get lucky some day and find some of the records that can help clear some of this up.
Posted by Denise at 9:29 PM