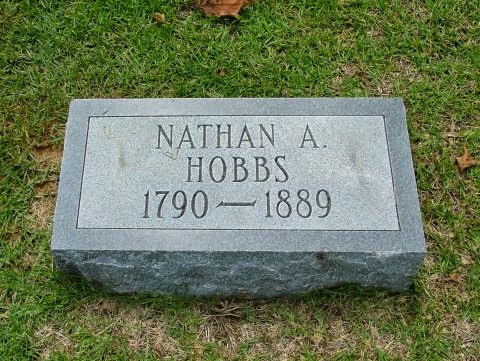 I had another ancestor queued up for week 16 but when Amy Johnson Crow published the weekly themes for May, I saw it fit right into week 20. So, I’ll save that post for week 20 and blog about someone I already knew fit the week 16 theme of “Live Long” instead. That’s who I should have blogged about in the first place. Since I like to post on Friday evenings and haven’t written anything for this ancestor, this blog entry won’t be my usual timeline style, not that it really matters. Old Nathan lived a long life and has several nice news articles to prove it. I’ll add him to my list to do a future blog post to fill in the rest of his life details later.

Nathan Augustus Hobbs, Sr., son of Robert L. Hobbs Sr. and Mary Marion Caldwell, was born on January 8, 1790 in Spartanburg, Spartanburg County, South Carolina. He married Mary Elizabeth Lankford on November 16, 1812 in Greene County, Georgia. Together they had eight children—Robert L., Joel Garner, Rebecca B., Caroline B., Nathan Augustus Jr., Minor Smith, Elizabeth Fanny, and Marian Langford Hobbs. Nathan died on June 21, 1889 in Penfield, Greene County, Georgia and was buried at Penfield Cemetery, in Penfield. For the last nine years of his life, Nathan was classified as a nonagenarian—a person 90 years old or between 90 and 100 years old according to The Free Dictionary. Less than six months and he would have been a centenarian! Nathan is my fourth great-grandfather.

I imagine that living into your 90s in the late 1800s was a rare event, enough so that Nathan had at least seven news articles written about him. Below are the articles I’ve found in the historical newspapers. They provide a wealth of information about his character and the man he was.

Sunny South, September 15, 1883, page 4. Another remarkable landmark is “Old Uncle Nathan Hobbs” whose name and long gray beard are familiar to every Penfield student. Though in his 94th year, he is still hale and hearty; chops cotton, builds cow-houses, reads without eye-glasses, enjoys a good joke, eats collards, corn bread, pound-cake, pig-iron, chunks of wood, sole leather and anything that may come along, and digest it all like a grist mill. It was a great pleasure to meet him, and his faithful daughter, Fanny, who looks after him so kindly in his old age.

Atlanta Constitution, Nov. 9, 1886, page 7. Another rare character is Nathan Hobbs, near Penfield, Ga. He is now in his ninety-seventh year, and can work every day and read without spectacles. He was born in the latter part of the eighteenth century. Seventy-five years ago he settled at his present home, where he has lived continuously ever since.

In 1826, Nathan was baptized in Town creek, Rev. Jack Lumpkin performing the ceremony. His companion in going down under the water was the late Hon. Thomas Stocks, who was president of the state senate. For eighty-five years Nathan had been afflicted with rheumatism. The old man is a great reader. For the news he reads The Weekly Constitution regularly; for church events he looks to the Christian Index, and for religion he reads an old Bible which was found on the battlefield of Cowpens, in 1781. The book was in an oaken chest, which had been left on the field by the British. He expresses his determination to live until he is 125 years of age.

Weekly Banner-Watchman, April 19, 1887, page 3. Green county has more old people than usually falls to the lot of any county. Uncle Nathan Hobbs, of Penfield, is in his 97th year; Dr. Poullaine, of Greenesboro [sic], and Miss Jackson, of our neighborhood, are past 95, and are quite active. We have perhaps ten others between 80 and 90.

Sunny South, March 31, 1888. There are three nonagenarians in Greene County, Nathan Hobbs is ninety-nine years old, Dr. Thomas N. Poullaine is past ninety-seven and Mrs. Jackson is in her ninety seventh year.

Weekly Banner-Watchman, June 26, 1888, page 1. An Old Man. Mr. Nathan Hobbs, of Penfield, is 100 years old, and hale and hearty. Mr. Hobbs has outlived every administration since the Revolutionary war. He has in his possession a Bible that was picked up at the battle of the Cowpens by his father. It was the property of a British paymaster, and was found on the battle field in his chest. Mr. Hobbs is a strict member of the Baptist church, and from his appearance has some years in store yet. [Note: It seems the Weekly Banner-Watchman got Nathan’s age wrong since he didn’t make it to age 100.]

Union Recorder, May 21, 1889, page 5. Nathan Hobbs of Greene county was 99 years of age on Jan. 8. He has been afflicted with rheumatism since he attained his majority, and has had a cancer for several years. His eyesight is good. He reads without glasses and has a good appetite and sound mind and memory. He was a postmaster at Penfield for more than thirty years. He has been a member of the Baptist Church for more than thirty years, and often refers to sermons he has heard preached by the late Jesse Mercer.

Eatonton Messenger, June 15, 1889, page 5. Mr. Nathan Hobbs late of Greene county died at Penfield on Tuesday of last week, aged 99 years, five months and three days. He was an exemplary member of the Baptist church for over 75 years.

With the majority of my ancestors being from Georgia, I feel lucky to have a treasure trove of free historical newspapers to research from. I know I’ve spent hours upon hours researching the village of Penfield in general, hoping to find anything that would help me break down a brick wall for Alice Beman Lankford and her son Carroll Harvey Lankford, Nathan’s great-granddaughter and second great-grandson respectively. In case it helps someone else, I’ve included links to the archives I pulled from for these news articles. Happy hunting!