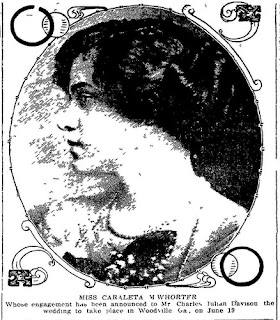 The 52 Ancestors theme this week is “wedding.” I myself am a June bride but I won’t be telling my story. Maybe somewhere down the road (I’m talking way down the road) the “wedding” theme will be repeated for 52 Ancestors and someone else will write my story. Instead, I’m writing about Coraleta McWhorter, another June bride and a member of the prominent McWhorter and Davison families of Greene and Clarke Counties in Georgia. The McWhorter’s and Davison’s were often in the newspapers and the wedding of Coraleta to Charles Julian Davison was definitely newsworthy.

The local reporters wrote descriptive stories detailing the flowers and clothes at the events they covered. I always find them fun to read. Below, along with my regular timeline information, I’m sharing several articles published by the Athens Banner. The first article reports on a social event for Camilla McWhorter in which Coraleta was an attendant. The remaining articles are related to Coraleta’s engagement and marriage to Julian Davison.

On June 2, 1900, Coraleta lived with her family in the 138th District of Woodville in Greene County, Georgia. The census enumerator listed her birth year as 1891 and an age of 9 years.

During 1908 and 1909, Coraleta attended Cox College where she was a member of the Sidney Lanier Society. The Atlanta Georgian and News reported on two of the society’s annual celebrations—on February 13, 1908, Coraleta performed a reading of “To the Cuckoo” by William Wordsworth; on April 15, 1909 she played a piano solo by Edvard Grieg.

On April 20 1910, 19 year old Coraleta lived at home. The enumerator didn’t list an occupation for her nor did he indicate that she was in school. Her widowed grandmother, Nancy Pope (Thurman) McWhorter, lived in the home with them. There was also a lodger named Rebecka Cramer and a servant named Homer Cobb living in the home.

On April 23, 1912, the Athens Banner reported on page 2: To Miss Camilla McWhorter. Miss Mary Gerdine entertained yesterday afternoon in compliment to Miss McWhorter. The happy occasion was marked by a delightful informality. Miss Gerdine’s handsome home was beautifully decorated. The spacious rooms were very attractive with great bunches of dogwood blossoms, and crystal vase and baskets of pink roses banked on the mantels and cabinets. Miss McWhorter was presented a dainty piece of lingerie, the exquisite work of the charming hostess. Hand-embroidered handkerchiefs were given for the first prize. After the game delicious refreshments were served at the card tables. The guests present were the popular bride-elect Miss McWhorter, and her attendants, Mrs. Hugh Price, Miss Kathryn Erwin, Miss Mattie Wilson DuBose, Miss Caroleta McWhorter, of Woodville, Miss Annie Carlton, Miss Katie May Arnold, Miss Susie Gerdine, Miss Marion Gerdine, Mrs. Edgeworth Lamkin.

On May 6, 1913, the Athens Banner reported on page 2: M’Whorter-Davison. Mr. and Mrs. Jas. Vason McWhorter, of Woodville, have announced the engagement of their daughter, Coraleta, to Mr. Charles Julian Davison, the marriage to take place Wednesday evening, June 19th, in the Baptist church at Woodville. Miss McWhorter is one of Greene county’s brightest and prettiest girls. She is a niece of Judge Hamilton McWhorter, of Athens. Mr. Davison is a prosperous young merchant of Woodville, and is the son of Mr. Robt. E. Davison, chairman of the prison commission of the state. He is a nephew of Mr. Alex Davison, of Athens.

On May 30, 1913, the Athens Banner reported on page 2: McWhorter-Davison. The following invitation has been received in the city. Mr. and Mrs. James Vason McWhorter request the honor of your presence at the marriage of their daughter Coraleta to Mr. Charles Julian Davison on the evening of Thursday the nineteenth of June at half after eight o’clock. Baptist Church, Woodville, Georgia.

On June 21, 1913, the Athens Banner reported on page 2: McWhorter-Davison. The beautiful and interesting wedding of Miss Coralita McWhorter and Mr. Julian Davison was solemnized Thursday evening at the home of the bride in Woodville, Ga. The ceremony took place at the church in the presence of a large assemblage of friends. Rev. John Davison performed the ceremony. The bride was given in marriage by her brother, Prof. R. L. McWhorter of the University. The bride was attended by her sister, Miss Lucile McWhorter, as maid of honor. The maids were Miss Sallie McWhorter, of Athens, Miss Sallie Davison and Miss Laride Turner, of Macon. The groom’s brother, Mr. Henry Davison, was best man. The groomsmen were Mr. Neil Gorman, Mr. Fondrill McWhorter, of Atlanta, and Mr. John Hudson. The ushers were Mr. Hart Sibley, of Union Point; Mr. Emmett Davison, of Woodville, and Mr. Jim Davison, of Greensboro. Miss Helen Davison presided at the organ accompanied by Mrs. J. K. Hackett, aunt of the bride, who rendered several beautiful vocal selections before the entrance of the wedding party. The handsome young bride was lovely in her gown of white charmeuse trimmed with exquisite lace and pearls. Her soft veil was caught with bunches of orange blossoms. She carried a shower bouquet of bride’s roses and lilies. The maids were charming in picturesque gowns of green satin veiled with pink embroidered chiffon and carried numerous bouquets of Killarney roses. The church decorations were very handsome. Five white columns encircled the altar which were twined with smilax and pink and white roses. The background was formed of stately palms. The marriage ceremony was followed by a brilliant reception at the home of Mrs. R. E. Davison. The presents were very handsome attesting their popularity. The wedding of these young people was an event of state wide interest both being connected with the oldest and most prominent families of the south. The bride is the daughter of Mr. and Mrs. J. V. McWhorter, of Woodville, and a relative of Judge Hamilton McWhorter’s family. Mr. Davison the groom is a nephew of Mr. Alex Davison. The wedding was characterized by elaborate and beautiful details for which happy event many out-of-town visitors were present.

Julian listed Coraleta as his nearest relative when he registered for the World War I draft on September 12, 1918. They lived in Woodville. Julian was a farmer and a merchant.

On January 8, 1920, Coraleta, Julian (enumerated as Charles J.), and their son Robert lived on Rail Road Street in the 138th District of Woodville. Julian’s parents lived two doors away.

Coraleta’s father James died in Woodville on November 27, 1920. He was buried at Woodville Cemetery. It appears that Coraleta’s mother later married a Mr. Jackson. I base this on Find A Grave Memorial# 52989817 for a Cora Stakely Jackson who was born June 1857, the same month and year I had for Cora Stakley. Obviously I need to prove this so will look for some sort of documentation.

On April 16, 1930, Coraleta and her family still lived in the 138th District of Woodville. Her husband, enumerated as Julian, was a merchant in a dry goods store. Her son Charles Jr. was enumerated as Mac.

Coraleta’s husband, Julian, died on June 22, 1934 at the age of 55 in Greene County, Georgia. He was buried at Woodville Cemetery, leaving Coraleta a widow at age 44.

Coraleta’s mother, Cora, died on January 28, 1937. She was buried at Woodville Cemetery.

On April 3, 1940, Coraleta still lived in the 138th District of Woodville. Her brother William Pope McWhorter lived with her and her two sons. The enumerator didn’t list an occupation for Coraleta. The census record indicated that Coraleta had attended college for three years. 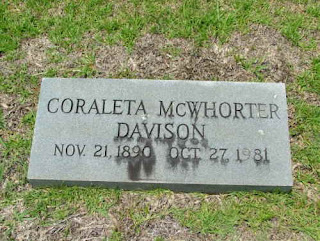 Coraleta’s brother Charles died in San Diego, San Diego County, California on September 21, 1954. He was buried at Fort Rosecrans National Cemetery in San Diego after serving in the U.S. Navy during World Wars I and II.

Coraleta died at the age of 90 in Union Point, Greene County, Georgia on October 27, 1981. She was buried beside her husband at Woodville Cemetery.

Vanishing Georgia, Georgia Division of Archives and History, Office of Secretary of State
Posted by Denise at 9:48 PM