On June 19, 1900, Julia and John, along with daughters Mary and Jessie, rented a home in Woodville, Greene County, Georgia. John was a farmer.

Julia’s mother Mary Ann died in Penfield on March 26, 1919. She was buried beside her husband in Penfield Cemetery.

On January 16, 1920, Julia and her family lived on Larenby Street in Stag Hall, Warren County, Georgia. Their oldest daughter Mary no longer lived in the home. John had left farming behind and became a car inspector for the Georgia Railroad. Julia was able to read and write. 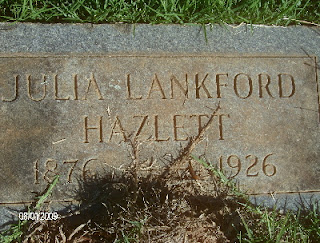 Several years ago, I connected with another researcher who inherited a box of photos, mainly from the Penfield area. The picture of the three women below was in that box. The researcher didn’t know who these three women were but luckily someone had labeled them Mrs. Hazlett, Mrs. Barnhart, and Mrs. Callaway. That told me right away who they were. They were three Lankford sisters—Mrs. Hazlett was Julia Lee Lankford Hazlett; Mrs. Barnhart was Jessica Corinne Lankford Barnhart; and Mrs. Callaway was Alice Beman Lankford Callaway, my great-grandmother. I already had a photo of Alice, but didn’t have one for Julia or Jessie so you know how exciting it is to receive a photo and be able to put a face to a name!