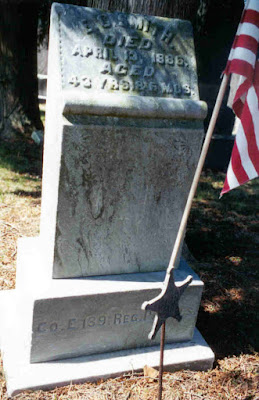 By 1848, the family had moved to Apollo, Armstrong County, Pennsylvania where Erastus was exposed to the local political world. His father John, a local innkeeper, was elected a town councilman on May 3, 1848. According to the book From 1816—1916: History of Apollo Pennsylvania—The Year of a Hundred Years by Thomas James Henry, M.D., the “voters were commanded to meet at the house of John Smith and elect a burgess and five councilmen.” The book further stated that “For many years the election was regularly held at the home of J. T. Smith and Mrs. Smith always served a turkey dinner to the board.” By the spring of 1850, John was serving on the first board of school directors.

It was in Apollo that Erastus learned the reality of life and death at an early age. He was just seven years old when his one year old sister Minerva contracted cholera and died on May 17, 1850. Minerva was buried at Riverview Cemetery in Apollo. Later that year on November 7, 1850, the census enumerator recorded the family in Apollo. The family home was valued at $2000. Erastus’ 20 year old half-sister Margaret McIlwain and 14 year old half-brother John McIlwain lived in the home with the family. T. J. Henry noted in his book that during the 1850s, Erastus played the tenor drums in a martial band which performed on drill days such as the 4th of July.

On July 5, 1860, Erastus and his family still lived in Apollo. His father John had a personal estate valued at $500 and the value of his inn, located on the corner of North and Canal Streets, was unchanged since 1850 at $2000. Seventeen year old Erastus was a laborer, most likely working in the inn.

The Civil War began in 1861 and on September 1, 1862, Erastus mustered into Company E of the 139th Pennsylvania Infantry Regiment as a private in Pittsburgh, Allegheny County, Pennsylvania. Perhaps wanting to make sure his spiritual life was in order before entering the war, Erastus joined the First Presbyterian Church in Apollo. The church register shows that Erastus was admitted to the church by “Escamination” on October 10, 1862. Erastus had served a little over a year when on May 3, 1863 he was wounded in the Battle of Salem Heights in Spotsylvania County, Virginia. While still serving during the Civil War, Erastus lost his father John who died on March 11, 1864. His father was buried at Riverview Cemetery in Apollo. I wonder if Erastus was allowed to go home to mourn with his family. Or when he even learned of the death of his father. The following year on May 18, 1865, Erastus was promoted to full corporal. He mustered out of service on June 21, 1865 at Washington, DC. According to his discharge papers, Erastus was five feet seven inches in height. He had a light complexion, gray eyes, and sandy hair.

On June 24, 1870, Erastus, Jane, and their daughter Elsie lived in the Kellys Station subdivision of Apollo. Erastus, 25 years old, was painting houses. His father-in-law Samuel Anderson lived in the home with Erastus and his family.

Erastus was suspended from the First Presbyterian Church in Apollo on March 21, 1872.

Erastus’ mother Jane died on March 11, 1877. She was buried in the family plot at Riverview Cemetery in Apollo.

On June 21, 1880, Erastus, Jane, and his four children continued to live in Apollo. Erastus was a house painter. 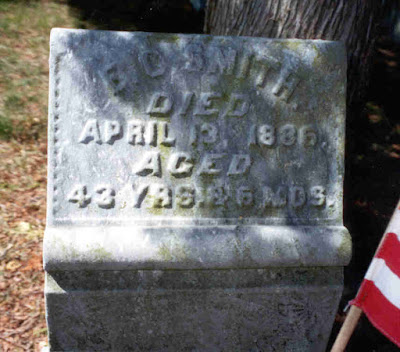 Erastus’ life was cut short at the age of 43 when he died from erysipelas in Apollo on April 13, 1886. According to About Health,* “Erysipelas is a superficial infection of the skin, which typically involves the lymphatic system. Erysipelas is also known as St. Anthony’s Fire, an accurate description of the intensity of this rash. Erysipelas was a feared disease in pre-antibiotic days.” Erastus was buried at Riverview Cemetery in Apollo. His youngest son Richard was just seven years old having celebrated his birthday the day before—the same age as Erastus when his little sister Minerva died. Sometimes life repeats itself.