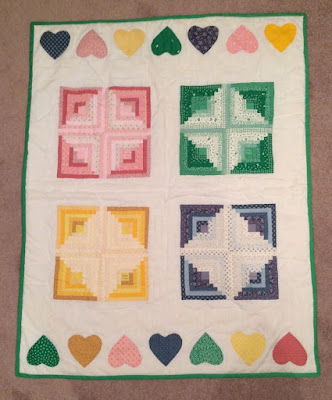 I was pregnant with my oldest son Chris in 1983. As all expectant parents do during a pregnancy, we were preparing a room for the baby. The room was directly across the hall from our bedroom and was perfect except for one thing—it had a big, ugly gray circuit breaker box on the wall. The breaker box was the first thing you saw when you walked into the room and somehow I had to cover it. It just so happened at the time that my co-worker Peggy Brouse was giving lunchtime quilting lessons to three other co-workers. In my mind, the breaker box could be covered by a wall hanging so I told them I had the perfect project if they were interested. I guess they thought it was a good idea and that became their next project.

We didn’t know the sex of the baby so when thinking about how I wanted to decorate the room, I decided to cover all bases and went with a pink, blue, green, and yellow color scheme which I shared with the quilters. They huddled together, came up with a plan, and got to work.

I worked with a wonderful group of people and that December, the entire department held a baby shower for me. The four quilters had finished their project by then and presented it to my husband and me that day. They were very proud of the work they had done, as they should have been. They took my color scheme to heart and created a beautiful piece of art that will always be cherished. Each quilter took one color and quilted an individual block. When all four blocks were finished, they worked together to sew the blocks to the top and back panels. When presenting the baby quilt to me, they included a card that contained the following details:

"There are 46 different fabrics in the quilt. Approximately 320 separate strips of fabric were hand sewn to form the blocks. The back of the binding is machine sewn, and that’s the only machine sewing on the quilt. It took over 200 hours of stitching to complete. Each person signed the block that they stitched."

In August 1984, Peggy borrowed the quilt and entered it in the handicrafts competition at the Prince William County Fair in Manassas, Virginia. The baby quilt took third place! 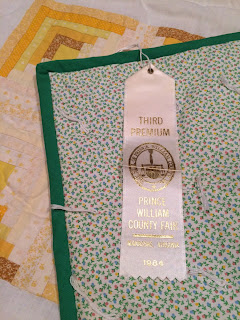 The baby quilt remained on the wall for years, probably eight or so. Chris eventually moved into a larger bedroom when his brother Kevin was born and he took over that room. Kevin doesn’t remember the quilt hanging in his room. He remembers a picture of an elephant hanging on his wall instead (I don’t) so at some point the quilt came down and was replaced with something more suitable for a little boy vs. a baby.

I consider this baby quilt to be a family heirloom—something I hope will be passed down many generations in our family—so I keep it tucked away in a safe place until it’s time for the next generation. I hope they will treasure it as much as I do.
Posted by Denise at 7:32 PM

Email ThisBlogThis!Share to TwitterShare to FacebookShare to Pinterest
Labels: Heirloom