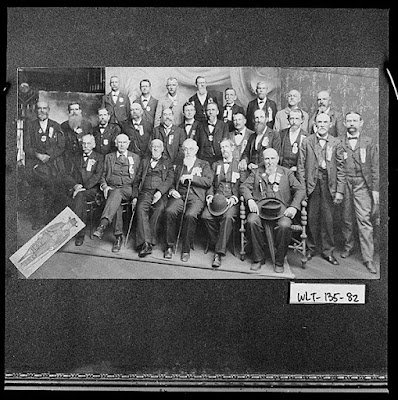 During my research for another ancestor, I found the photo to the right that contains a man who I believe is Henry Clayborn Jones Sr., my second great-grandfather. The photo is from 1890 and is a group of Civil War veterans from Walton County, Georgia. Once again, I’m asking myself if I’ve found a hidden treasure.

Back on November 6, 2015, I blogged about a photo I found in my Daddy’s house when clearing it out to put on the market (52 Ancestors – Hidden Family Treasure – (week 45 – 2015). I’m blogging now to ask anyone that’s reading this post to take a look at the photos I posted on November 6 and compare them to this photo—specifically the bearded man in the middle of the front row. Henry Jones was in fact a Civil War vet from Walton County, having served with the Hillyer Rifles. Here’s what I previously wrote about his military service:


Henry Jones served the Confederate States during the Civil War enlisting on June 13, 1861 as a private in Company C, 9th Regiment, Anderson Brigade Volunteers, also known as the “Hillyer Rifles.” Company C was commanded by Captain George Hillyer and engaged in the Battle of the Wilderness, fought in Virginia May 5–7, 1864. The Battle of the Wilderness was a blood bath with casualties heavy on both sides, including Henry who was shot under his left shoulder blade. The ball, which was never extracted, struck a rib and then lodged near his kidney leaving the left side of his body partially paralyzed. Henry frequently passed blood from his bladder as a result of his injury which affected his back and caused him to be in constant pain. He couldn’t straighten himself or sit down for long periods of time resulting in total disability from any kind of work. Henry survived the war though and was promoted to Full 2nd Sergeant before he mustered out at the surrender at Appomattox Court House in Virginia on April 9, 1865.

So what do you think? Did you look at my November 6 post and compare the photos? Am I on the right track? Do the men in the different photos look like the same person? Do you agree with me that they’re one and the same? I’m interested in other opinions with regard to this photo and look forward to hearing from someone!

Georgia Department of Archives and History
This photo of Walton County Civil War veterans is from the Vanishing Georgia collection of the Digital Library of Georgia which is part of the Georgia Department of Archives and History. The Georgia Archives contains a treasure trove of research material for the state of Georgia. I’m thankful for all they do for Georgia history and that they work so hard to share what they have with the public.

Photo information: Image ID wlt135-82, Walton County, ca. 1890. Group of Civil War veterans from Walton County gather for a photograph. The image of the man in the lower left corner was that of a veteran already deceased. Vanishing Georgia, Georgia Archives, Morrow, Georgia.
Posted by Denise at 8:10 PM