On May 8, 1912 when Ina was four years old, the Athya family left Glasgow, Scotland via the S.S. Grampian, arriving in Quebec, Canada on June 16. Upon arrival, they settled in Joggins Mines in Nova Scotia where they lived for two years. The outward passenger list contained a surprise for me in that it listed Ina as Jemima. It makes sense as her maternal grandmother’s name was Jemima Durie Athya. Was this an attempt to name her after her grandmother Athya? In all of my conversations with my mother-in-law about this family, she never mentioned a name change for Ina. I wonder if she knew about it.

In 1914, Ina’s father left the family behind in Nova Scotia and traveled to America, arriving at the Port of Vanceboro, Maine via Class D on July 9. He was 36 years old and was joining his uncle, William J. McCandler, who lived in Steubenville, Jefferson County, Ohio. The rest of the family arrived in America via the Port of Buffalo, New York on November 8, 1914. All but Ina’s brother John would remain in Steubenville the rest of their life. John eventually moved to Pittsburgh, Allegheny County, Pennsylvania where he lived until his death in 1988.

On January 22, 1920, Ina lived at 641 Grandville Avenue in Steubenville with the rest of her family. She able to read and write and was recorded as having attended school at some time since September 1, 1919. The census enumerator listed her as an “Alien” who spoke English. Her father worked in a heater furnace mill. 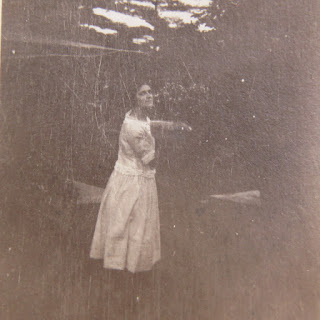 Ina married Joseph A. Schneider, son of John Schneider and Julia Wendling, about 1929. She was 22 years old. They never had children.

On April 18, 1940, Ina and Joseph rented a home on Summit Avenue in Steubenville. The census enumerator recorded her birthplace as Scotland. Ina was a cashier in a retail department store. She and Joseph built a nice home in Wintersville, Jefferson County, Ohio in the late 1940’s. They always had a nice garden with lots of trees and flowers.

Ten years later at the age of 70, Ina died on August 16, 1978 at the St. John Medical Center in Steubenville. Cause of death was listed as respiratory failure and saddle embolus abdominal. McClave-Chandler-Mills Funeral Home located at 143 Canton Road in Wintersville handled the arrangements for her August 19th burial at Mount Calvary Cemetery in Steubenville. At the time of her death, Ina and her husband lived at 240 Woodridge Drive in Wintersville.

Ina was a housewife and a member of the Westminster Presbyterian Church. She had a fair complexion, brown hair, and blue eyes.