On April 21, 1910, little Ellis lived with his family in Civil District 2 of Lawrence County, Tennessee. He was 1 and 7/12ths years old according to the census enumerator. His parents had been married for 12 years. Ellis’ mother was recorded as the mother of six children, all of which were living. There were two Hanson families living in the neighborhood and I’m sure it’s possible they were related through his mother, Martha Hanson. The census enumerator’s handwriting is hard to read but it looks like they lived on Lexington Road.

Before Ellis’ 8th birthday, his life changed forever on November 28, 1916 when his father William died suddenly at the age of 48. He had just returned from the fields in Liberty Grove, Lawrence County, Tennessee and complained of stomach sickness. It may have been a heart attack however. William was buried at St. Truitt Cemetery in Liberty Grove the next day. William’s death left Ellis’ 36-year-old mother a widow who now had to raise eight children alone.

On January 9, 1920, 11-year-old Ellis lived with his widowed mother and siblings in Civil District 2 of Lawrence County, Tennessee. It appears to be a different neighborhood than in 1910, however, they are still surrounded by other Hanson families. His mother was a manager on a farm with his oldest brother Samuel helping out as a laborer on his “mother’s farm.”

Ellis’ brother Herbert died of malaria on September 9, 1929 at the age of 26 in Lawrence County. He was buried at St. Truitt Cemetery in Liberty Grove.

On April 10, 1930, the family still lived in Civil District 2 of Lawrence County. Again, they were surrounded by Hanson families, although different ones than in 1920. At age 21, Ellis was a laborer on a farm. The census enumerator actually classified him as an “unpaid worker, member of the family.” Virginia, his oldest sister, lived next door with her husband, Hobert Plunkett, and their two children. 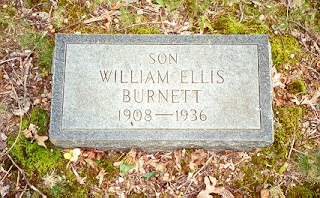 Ellis died suddenly on July 14, 1936 from appendicitis at Eliza Coffee Memorial Hospital in Florence, Lauderdale County, Alabama. It’s believed his appendix ruptured. At the time of his death, Ellis lived in Loretta, Lawrence County, Tennessee where he was a farmer. He was just under 28 years old. Ellis was buried at Saint Truitt Cemetery in Lawrence County. He never married.

When I look at the picture of Ellis above, I see my Daddy—Sam Lankford. Here’s a side-by-side comparison of the two of them. What do you think—does anyone else out there think they look alike? I always find it interesting to see the family resemblances in collateral lines. Daddy’s grandfather, Thomas Terrell Burnette, and Ellis’ father, John William Burnett, were brothers so Daddy and Ellis would be first cousins, once removed.


This blog entry completes 100 ancestors! I never thought I’d make it that far. Unfortunately, I now need to take a break from the series as I’ve been neglecting other projects. The most important project on my list is to organize all of the family photos—a monumental but important project. I’ll still fit in time to blog though—maybe it’s time to get back to documenting our family treasures. Wish me luck!
Posted by Denise at 6:32 PM