On June 1, 1900, Florrie’s family lived in Schull Shoals, Greene County, Georgia. The census enumerator listed her as Flora. Florrie’s father was a farmer. The enumerator recorded her mother as having had eight children, three of which were living. There were three children living in the home at the time—Florrie and her brothers Corrie and John. The record shows that Florrie’s parents had been married for 10 years. This makes no sense though as her mother Ada was enumerated as 22 years old (born July 1877) in this census record. That would mean Ada was 12 years old when she married Wade.

On April 22, 1910, Florrie and her family still lived in Schull Shoals. The census enumerator recorded her parents as having been married for 20 years and her mother as having had of 11 children, 7 of which were living—Florrie, Corrie, John, Mozelle, Clyde, Katie, and Cleveland. Her mother was enumerated as 38 years old in this census record which would be 16 years older, not 10, than she was in 1900. There was a 43-year-old male named W. B. Boswell living in the home as a boarder. Her father was still farming. Florrie’s brother Julius was not listed in the 1910 census so I assume he was born and died sometime between June 1900 and April 1910. He was buried at Penfield Cemetery in Penfield.

Florrie married Henry Bernard Cody, son of Andrew Cody and Camilla Oliver, in Clarke County, Georgia on August 17, 1913. The Athens Banner reported the marriage on August 19, 1913: “Lankford-Cody—Married at the Young Harris Methodist parsonage on Sunday, August the seventeenth, Miss Florrie Lankford to Mr. Henry Cody, only a few friends witnessing the ceremony which was impressively performed by the Rev. S. R. England. They have a number of friends who extend to them many wishes for happiness.” Together Florrie and Henry had five children—Bermond Hamp Cody, Ralph Royce Cody, Doris Cody, Roland Luther Cody, and Russell Lewis Cody. Roland and Russell were twins.


Just two years after her marriage, Florrie’s brother John died of heart disease at their Athens home (348 Hiawassee Avenue) the morning of August 17, 1915. John was just 16 years old. The family was still in mourning when one month later Florrie’s mother Ada died at the same home on September 13, 1915. The Athens Daily Herald carried her death notice on September 14, 1915: “LANKFORD, MRS. W. H.-Died yesterday afternoon at about 5:30 o’clock at the family home at 348 Hiawassee avenue, aged 37 years. She is survived by her husband and seven children. The funeral and burial services occurred this morning at 10 o’clock at Woodville, Ga.” Note that the death notice stated that Ada was 37 years old. Considering that the 1910 census record had her as 38 years old, it’s clear that there’s an age discrepancy here. Unfortunately, there was no birthdate on Ada’s tombstone and I haven’t found a death record. Both Ada and her son John were buried at Penfield Cemetery in Penfield (not Woodville). The death of Florrie’s mother left her father alone to raise seven children, including a two-year-old.

Florrie was still living in Athens in 1918—the Athens Daily Herald reported that her sister Clyde was in Athens visiting Mrs. Henry Cody on August 21, 1918.

In January 1920, Florrie and her family were enumerated twice in census records. On January 5, Florrie, Henry, and sons Belmond and Ralph lived with her widowed father and five siblings—Mozelle, Clyde, Katie, Cleveland, and Lila—on Bryant Street in Athens. Henry was a weaver in a cotton mill. As I looked at this census record, I realized that they lived next door to the James B. Brewer family. James had a son named Fred, whom Florrie’s sister Clyde would eventually marry. By January 20, Florrie and Henry have moved to a rental home on Hiawassee Avenue in Athens and were enumerated for a second time. This was a different house number than the one her parents lived in in 1915. Henry was a laborer in a cotton mill. Their oldest son was enumerated as Berriman.

Florrie’s family lost three immediate members during the 1920s making it a very sad decade. They were living at 188 Park Avenue in Athens when on April 12, 1922, her 14-year-old sister Katie died of cholera. Four years later Florrie’s sister Mozelle Lankford Blaine died of a ruptured appendix at St. Mary’s Hospital in Athens on February 21, 1926. She was 24 years old and had been married less than four years. Mozelle’s death certificate shows that she died on the 21st yet her tombstone records the date as the 4th. And then just over a year later, Florrie’s father died on May 10, 1927 from bronchial asthma (contributed by cardiac hypertrophy) in Athens. All three were buried at Penfield Cemetery in Penfield.

Florrie and Henry lived in Athens in 1928. The Athens City Directory recorded Henry as a salesman. The address was listed as 139 Miles.

On April 15, 1930, Florrie and her family lived in a rental home on Oneta Street in Athens. Florrie did odd jobs at home to bring in extra money and Henry was a winder in a cotton mill. They were still living in Clarke County, Georgia on April 1, 1935 but had moved to Penfield by 1940 according to census records.

On April 15, 1940, Florrie, Henry, and their three children—Doris, Roland, and Russell—lived in Penfield. For some reason, the census enumerator did not write Florrie’s first name on the census record. Seventh grade was the highest grade that she had completed. Florrie was a lunch room cook and Henry was unemployed. They lived four houses away from my grandfather’s step-brother, Homer Crawford Callaway, and five houses away from my great-grandmother, Alice Beman Lankford Callaway and her husband Robert Dawson Callaway. 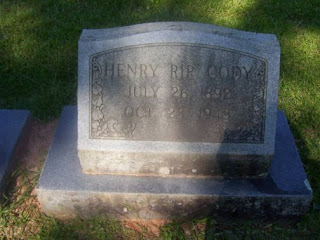 Florrie’s husband Henry died at home in Penfield on October 23, 1943 after a short illness that started at work in the plant of the Union Manufacturing Company at Union Point, Greene County, Georgia earlier that week. Henry was buried at Penfield Cemetery in Penfield. He was 51 years old at the time of his death.

Florrie apparently moved to Brunswick, Glynn County, Georgia shortly after Henry’s death. About 1945, Florrie married James Barden Strickland Sr., son of James P. Strickland and Frances W. (last name unknown to me). Barden was born in Cherokee, Colbert County, Alabama but had lived in Brunswick for most of his life. He had previously been married to Margaret Conn and they had at least three children—James Barden Strickland Jr., Doyce T. Strickland, and Walter Otis Strickland. I’ve been told Barden had children from a previous marriage(s) but I haven’t researched them so have no details to provide now.

Florrie died at her home on Darmouth Street on September 24, 1984 after an extended illness. Florrie had been an active member of her Brunswick community. Not only did she run Cody’s Restaurant for 30 years, according to the obituary that ran in The Brunswick News “she was a member of the First Baptist Church of Brunswick, the American Legion Auxiliary, Marshes of Glynn Chapter 243 Order of Eastern Star and the Bethlehem Shrine Number 4, Order of the White Shrine of Jerusalem.” Florrie was survived by her daughter Doris, son Bermond, sisters Clyde and Lila, 9 grandchildren, 13 great-grandchildren, and several nieces and nephews. She was buried at Palmetto Cemetery in Brunswick with her family.