On January 21, 1868, Harrison was nearing his second birthday when his mother had her sixth child—a boy they named John Louis. Sadly, John only lived for six months and died on June 26. He was buried at Neal’s Creek Baptist Church Cemetery in Anderson.

It took less than two years before Harrison had a step-mother. After all, his father needed help raising his remaining children. On August 3, 1879, Leroy married Cindarilla Darliska Amanda Hall, daughter of Aaron Hall and Clementina Norris Hall, at the old home place in Anderson County.

On June 1, 1880, Harrison, his father, step-mother, and brothers Brown, Elijah, Andrew, and Charles lived in Broadway, Anderson County, South Carolina. He father was a farmer who couldn’t read or write. The fall of 1883 brought death again to the Holland family when Harrison’s oldest sister Eliza died at the age of 27 on September 10. She was buried at Neal’s Creek Baptist Church Cemetery with her mother and siblings. 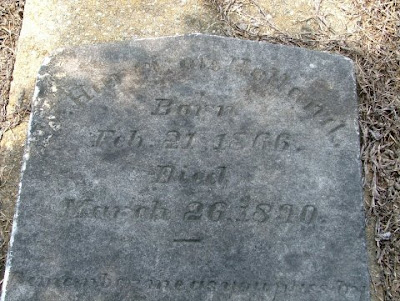 Things settled down for a few years and Harrison immersed himself in his church and community. Sadly, as was the fate of his siblings who had passed away at a young age, so too would he. Harrison died in Broadway Township of Anderson County on March 26, 1890. The Anderson Intelligencer published his obituary on April 3, 1890: Mr. W. Harrison Holland, son of Mr. L. T. Holland, died at the home of Maj. J. N. Vandiver, in Broadway Township, on Wednesday afternoon, 20th ult. He had been sick several weeks with pneumonia. Mr. Holland was about 25 years of age, and truly a model young man. At the age of 16 years he joined the Neal’s Creek Baptist Church, and up to the day of his death was a devoted and consistent member. For the past three years he has faithfully served as Superintendent of the Neal’s Creek Sunday School. Four years ago he became a resident of Maj. Vandiver’s family, having hired to that gentleman as a farm hand, and so faithful was he in all of his duties that from year to year, without solicitation on his part, his salary was increased. Mr. and Mrs. Vandiver were very much attached to the young man. Besides his farm work he gradually developed into a house builder, and was the architect and builder of many small houses. Last fall he built a commodious residence for Capt. T. W. Martin, finishing it from ground to roof-chimneys, painting, &c. —with but little of other help—in one hundred days. He did his duty in everything he undertook, and has gone to reap his reward in a brighter world. His remains were interred in the Neal’s Creek Church yard on the day following his death. Rev. M. McGee conducting the funeral services.

On April 3, 1890, The Anderson Intelligencer published the following news item: The Union was informed that the Superintendent of two of the schools had recently passed away—Mr. L. B. Haynie, of Bethany School, and Mr. Harrison Holland, of Neal’s Creek School. Rev. G. M. Rogers was called on for a speech on the life and character of Mr. Hayne, and Rev. R. M. King was asked for a similar speech on the life and character of Mr. Holland. Both gentlemen responded promptly, showing the worth of such men, and the great loss the Church and Sunday School had sustained by their death. After these speeches the Union was led in prayer by Rev. R. W. Burts, asking for God’s blessing upon those schools deprived of their leaders.

Ten days after Harrison’s death, his brother Brown Lee Holland, died on April 5, 1890. The Anderson Intelligencer published the following on April 10: Last week we chronicled the death of Mr. Harrison Holland, which occurred on the 25th ult., and now it is our sad duty to note the death of his younger brother, Mr. Brown Holland, who died last Saturday afternoon at the home of Mr. A. A. Carpenter, in Broadway Township. He had attended the bedside of his brother very closely during his illness, and on Sunday after the latter was laid away in the grave, he was stricken down with pneumonia, which gradually grew worse until death came. Mr. Holland was about 21 years of age, and was an upright, worthy young man, whose death is deeply regretted by a wide circle of friends. His remains were laid to rest by the side of his brother in the Neal’s Creek Churchyard on Sunday afternoon, Rev. C. B. Smith, of this city, conducting the funeral services.

On May 1, 1890, The Anderson Intelligencer published a “Card of Thanks” written by Harrison’s father: Mr. Editor: I desire to publicly return my sincere thanks to the kind friends and neighbors who so kindly attended the bedside of my sons, Harrison and Brownlee Holland, in their recent illness and death. I assure each and every one of them that their kindness will never be forgotten. L. T. Holland.
Posted by Denise at 8:51 PM